Unlike all other MPs, you are not going to implement this assignment using a jupyter notebook, but you will be editing python scripts.  Clone the assignment repository:

In this particular assignment, you are going to specifically edit two files which are listed below:

Dubin’s model of the car

In the control synthesis part of the Machine Problem, you first have to design a controller which takes the car from point A to point B. Before synthesizing the controller, we first need to come up with the control model (or dynamical model) of the problem.

For newbies here, a control model is the sensitivity of the change of state of the car (for example position) with respect to the control inputs, which in this case is the thrust (\(V_R\)) and steering angle (\(\delta\)). There have been many proposed control models of the car but as far as this MP is concerned we are going to use Dubin’s Model for the car which is as follows, 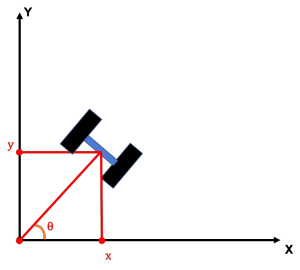 Now, you are going to implement a controller to drive the car from point A to point B.

One possible algorithm to do this you will have to first correct the heading of the car so that the heading angle of the car is equal to the angle made by the vector \(\vec{AB}\) with the x-axis. After this heading is aligned, you simply need to drive straight toward point B. This control strategy is described below. While this method generally works well, you may also implement your own controller, if you’d like.

Implement your controller in the blanked out portion in controller/controller.py in the gitlab repository. You can test your implementation by running the test function in the controller.py file.

Once your controller is working, you will then need to implement the RRT path planner as described in the next section.

RRT algorithm was proposed by our own U of I Prof. Steve LaValle and Dr. James Kuffner in 1998 as an efficient search algorithm in non-convex spaces. RRTs were later demonstrated to handle differential constraints so well that roboticist started using this in Autonomous Motion Planning. In this part of the MP, you are going to implement a RRT path planning algorithm for a self-driving car. RRT algorithm is described in detail below.

After the full run of the RRT algorithm, an example reconstruction would look something like this:

After completing the implementation of the RRT algorithm, you need to write a concise report answering the following questions: