To learn about her career in video editing and her other experiences after graduation, I recently talked with U of I English alumna Beth Cohon. Be sure to check out the sample of her work, linked below! 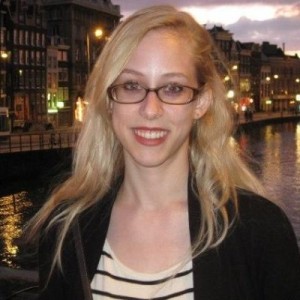 VO: When did you graduate from UIUC?

VO:  What was your reason for graduating early?

Beth:  I had a lot of AP credits before starting college. Then going into my junior year, I just realized that if I took something like 5 English courses each semester that I’d be able to graduate that year. However, looking back I sort of wish I had stayed all 4 years, because my last year was so fun. College is fun. I did take the next year to do a one-year MA, though, so I still got in my 4 years of school I guess.

Beth:  I got my MA in film studies, at King’s College London. In the UK most Masters courses are just one year full-time.

Beth:  Now I work as a video editor at Teak, an agency/production company in San Francisco.

VO:  How long have you worked there?

Beth:  I started as an intern in January 2014, then got hired on full-time a few months after that. It’s been about two years—it’s flown by!

VO:  Can you tell me more about what your job entails?

Beth:  Sure! The company I work for concepts for and produces commercials. Since we’re in San Francisco a lot of them tend to be for local companies, which in our case are places like Google, Nest, and Facebook. I edit the commercials that we produce, mostly for the web, but sometimes for broadcast. So I spend most of my day working in Premiere, which is Adobe’s video editing software.

VO:  What kinds of decisions do you make as you edit the commercials?

Beth:  Although a lot of it is really technical, editing and filmmaking is really about storytelling, at its core. So my decisions are based on how I can combine visuals with VO, music, and sound design to make a compelling narrative and, ultimately, sell a product.

VO:  That sounds like really creative work. Do you work on a team with others at the company? How much say do you have in how the final product comes together?

Beth:  I always work in a team with a producer, an assistant editor, creative directors, copywriters, and animators (and that’s just in-house!). Then there are clients, sound engineers, and colorists that I also work with. Having such a huge team has taught me to be really open to constructive criticism. While I would love to take credit for the final product, it’s always a combination of many rounds of revisions while working with this team. You’d be surprised how different a first rough cut is from the final cut. The quality difference is immense. And I credit that to working with awesome people.

Beth:  There are so many technical things you have to do before you start editing. You have to log and organize footage, make stringouts and selects. But once that’s over and you’re finally putting together footage and the vision all comes together, it’s really fun. I especially love editing images to great music. It’s what made me really fall in love with editing when I was in undergrad. I took a class at Allen Hall with Catherine Wiesener and we had an assignment to make a “musical video”—not a music video, but one where each part of the music guided the visuals. It was super experimental, and I just spent all my time working on it in that basement late at night for weeks. That was actually the only editing class I’ve taken. I look back on those times really fondly.

VO:  How interesting that that one class and one assignment made such a difference! What other experiences got you interested in a career in video editing?

Beth:  I think at that time during college I was in so many writing-intensive courses that getting that assignment, where I could express myself with no words at all, not even lyrics, was a breath of fresh air. However, after taking the class I didn’t immediately know that it’s what I wanted to do with my life at all. It took a few years for me, first of all, to be confronted with finding a job and starting a career and then, second of all, make myself admit that I had to choose a career path and not just generally pursue “film” which is what I was doing. At that point, I looked back on what I enjoyed the most about school, about filmmaking, and realized what I loved the most was editing. This was after I’d done several (read, five) internships in various areas of film and lit, actually.

VO:  Can you tell me more about those internships? Did you have any while you were in undergrad? What did you learn from your internship experiences?

Beth:  I didn’t have any internships during undergrad, but I did have one right after I graduated at 826 National, the nonprofit started by Dave Eggers which operates several tutoring/writing centers in cities across the country. It was such a great experience! Interns were given a lot of responsibility and the opportunity to write and volunteer and learn a lot about how a nonprofit runs. After that, I did an internship right after my MA classes ended, at the Institute of Contemporary Arts in London. I got to film and edit interviews with artists that they did each week. It’s such an interesting experience having a job/internship in a different country. I’d recommend it to anyone who is studying abroad; you get a more grounded experience of what it’s like to live in that country, as opposed to just studying there. After that, I moved to San Francisco, where I had a series of internships at production companies and film nonprofits. Since I didn’t have any more school left and I was really looking for a permanent job, those internships were probably the most important.

VO:  What skills from English do you find you draw on most in your work?

Beth:  That’s something I think about a lot actually. I think that what I learned as an English major—the storytelling skills and the ability to think conceptually and creatively—are so important in what I do. I can’t edit if I can’t create a story. And you wouldn’t want someone to edit your commercial or your short film if he or she couldn’t think creatively, to imagine a larger narrative from just clips in a bin. I really appreciate the knowledge I gained from analyzing literature, taking Creative Writing courses, and honing my communication skills for that reason.

Beth: Honestly, keep writing and reading. It’s so easy to fall out of the habit once you’re done with school and suddenly you’ll realize you haven’t read a book in a month, or two… or several, because life gets so busy. So my advice is to hold on to that idealism and love of literature and art and writing as long as possible. You’d be surprised how quickly those skills fade and life takes over. Cherish them! And don’t worry too much about getting employed. Eventually, every last one of you will land a job. It just takes a little patience.

To see an example of Beth’s work, check out this April Fool’s video she and her company created for Google last year: https://www.youtube.com/watch?v=Cp10_PygJ4o.