Why I Am A Sponsor

I am a curious person and an engineer (educated at the U of I). Thus, I am genetically and professionally given to asking a lot of questions. So when my wife and I considered becoming sponsors of Ebertfest, I wanted to know the pros and cons of sponsorship. Would I be able to talk with Steven Spielberg into the wee hours of the morning about his films, our philosophies of life, the future of mankind and whether there is other life in the universe (the director of ET should know, right?). There, in his hotel room (I figured his would be much nicer than mine), we, with a few other children of the night (nocturnal souls), would share, discuss, speculate and possibly solve the great questions of our time. That would certainly be worth the price of entrance into the Ebertfest sponsor family.

To get answers to my questions, I exchanged countless emails (over 10 pages when condensed and printed) and spoke many times with assistant Festival director, Casey Ludwig. I was thrilled that she patiently answered each of my questions. I appreciated that someone busy making Ebertfest happen would devote so much time to helping me make a decision. I was not a sponsor, I was not even sure I would become a sponsor – nonetheless Casey treated me like a close friend. I was impressed that her answers seemed honest – she did not tell me what I wanted to hear. Yet, even while saying that my late night session 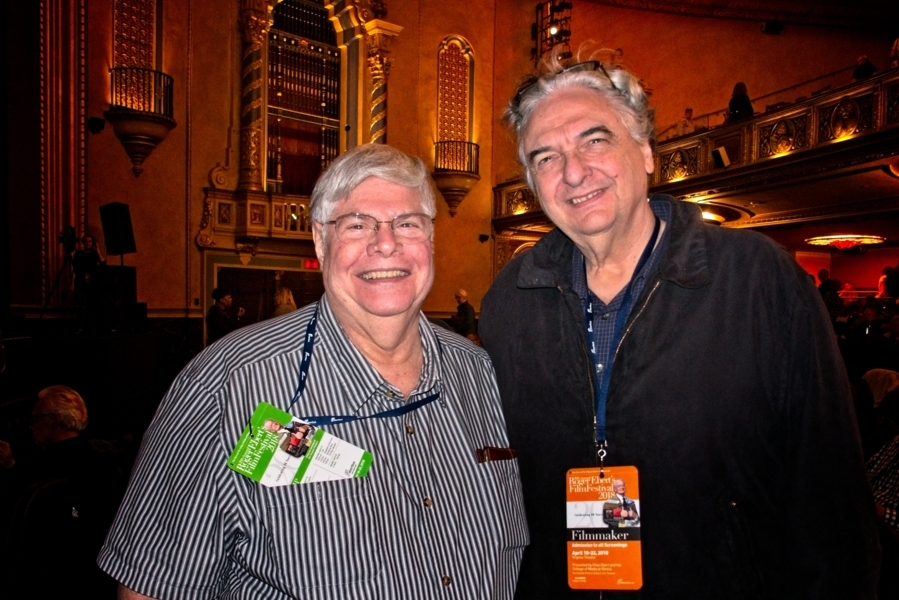 with Spielberg (or someone equally as enticing) was not likely, she suggested I would have access to many of the filmmakers (actors, directors, producers, etc.) who attend as representatives of their films. More importantly, she said, I would be engaging with other sponsors: people who love movies and love to talk about movies.

Access to celebrities was just one of several sponsorship benefits I was investigating. While sponsorship offers a publicity opportunity for a business, my business didn’t need that – though I did enjoy seeing my company’s name repeatedly appear on-screen before each movie. Rather, my interest was the VIP pass benefits: the parties, the meals and the VIP seating. One thing these three benefits have in common is people! Each is an opportunity to interact with other sponsors. Yes, filmmakers would be in attendance – but most are at Ebertfest for only a day or two. Sponsors participate all 5 days – they are the people I would see the most.

When Casey explained the meal benefits of the VIP pass, they sounded wonderful. Not having to compete with 1000 Ebertfest attendees to find a restaurant, get a table, order (and eat) a meal and still get back to the theater in time for the next movie made the VIP pass very desirable. I was sold! My wife and I became sponsors of Ebertfest. We were so excited we could hardly wait the four months till the start of Ebertfest 19.

So how was our experience as sponsors? It was wonderful! As VIP sponsors we dined in a private room close to the theater. Lunches were waiting when we arrived, we chose what we wanted from the selection, then sat at any table and enjoyed the food and the company. Dinners were even easier – the meal was served at our table. In the VIP seating area, we talked with other sponsors before and between movies. The three parties offered a fun, social atmosphere where we were able to mingle and get to know many of the sponsors and filmmakers. All of these benefits elevated our experience. Ebertfest became so much more than movies and seminars.

I had been concerned that, as first time Ebertfest attendees, we would not know anyone – so would not integrate well with long time sponsors. Happily, I was wrong! The other sponsors were welcoming, friendly and interesting. Their knowledge of and insights on films really heightened our understanding and enjoyment of the movies we were seeing. Casey was right: the other sponsors did enhance our enjoyment. Since then, we also sponsored Ebertfest 20 – and plan to continue our sponsorship in the future. The above notwithstanding, if I ever get a chance to spend some quality time with Steven Spielberg, I will definitely go for it!