People I Know VIP at Ebertfest 2006 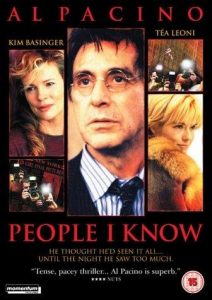 I headed over to the office of our assistant festival director at the time, Mary Susan Britt. As I dropped the Snickers bars on her desk, I picked up my volunteer assignment. Inside the envelope was the name of my guest and his itinerary. Bobby Zarem, fabulous Hollywood publicist and the creative mind who developed the “I Love NY” advertising campaign known around the world. I wobbled on my scooter as I went the few blocks back to work to begin my research. I was so excited!! A good host knows their guest. After all, the festival was coming up in the following week and there was plenty to do. When I learned that Bobby developed the famous NY ad campaign, I called my friend at a local t-shirt shop and had him whip up a t-shirt with the logo. Bobby would get a midwest welcome on arrival and know who was there to pick him up.

Bobby flew into Willard International Airport. My festival “cousin,” at the time, Kevin arrived a few hours earlier. I appointed him co-host, so the two of us scooped up Mr. Zarem and the 6th Annual Roger Ebert Film Festival was underway. As a local gal who is comfortable with just about anyone, I tried to keep my excitement in check. I mean, Holy Cow! Here was a man who had repped some of the most prolific thespians of our time. Dustin Hoffman, Stallone and so many others. Bobby was now in my car tooling around the town in Champaign, IL. The first thing that you must know that is he is SUCH a nice guy. A gracious host wherever he goes, because if he’s attending, it’s Bobby’s party! The king of first impressions Bobby Zarem is the consummate relationship building man. I quickly noted that as Kevin and I wanted to learn more about Bobby, Bobby’s attention first focused on us and then the landscape of the festival. What did we do? How were we connected to the festival? As he asked each question, he listened with great intent. To build good relationships, you have to be a good listener.

Quickly our conversation turned back to the opening night gala. Bobby had a few questions; Who would be there, what to wear, when would he get to see Roger and Chaz?  I gave him the news that we were dropping him off for a few hours of peace but when we returned, he’d be off and running for the weekend. The President of the University would be our host but it’s a casually elegant affair and not to worry. Be comfortable because that is the theme of Ebertfest. We are all here for the great movies and the experience. I advised a nap and then a shower because he was in for a world-wind of thoughtful entertainment and fun for the next few days. Late nights that you can’t drag yourself away from along with question and answer periods following each movie that can be life-changing.

Typically, the role of a host is to ferry folks around town, be sure they have what they need while they are here and make them feel at home. I didn’t expect that Bobby would welcome us into the fold and carry us along on his Ebertfest journey. We arrived at the university President’s house for the Gala and Bobby encouraged us to come in with him. This was one of my first experiences working with such a renowned Hollywood guy. It was great to watch him work the room, everyone he greeted beamed as he took an interest in who they were, which movie they were here to represent and as he walked along, he pulled people into his orbit. I was nervous because I wanted him to leave our town feeling like he had a warm experience that he would share with others. I didn’t want to miss a beat in his care.

So when we went to the green room the next day for dinner, I pulled up to the door, intending to drop him off. “Come on in with me,” he beckoned. “Oh! Sure!” I jumped out of the car, leaving it running and in the fire lane. Two hours later, it dawned on me and I ran to the door to expect to find it towed. It was still there, ready to take Bobby back to the theater.