This is a diagram depicting the rock forming processes described by uniformitarianism. 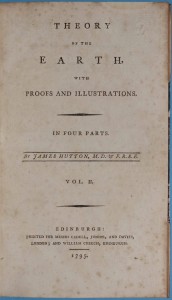 Uniformitarianism is a theory based on the work of James Hutton and made popular by Charles Lyell in the 19th century. This theory states that the forces and processes observable at earth’s surface are the same that have shaped earth’s landscape throughout natural history.

The earth sculpting processes alluded to above are the processes of erosion, deposition, compaction and uplift. Although these processes are constant, they occur at extremely slow rates. As a farmer, Hutton realized that the rates of erosion were so slow that it would take an inconceivable amount of time to observe drastic changes in Earth’s landscape.

The theory also states that these processes have occurred at constant rates throughout natural history. James Hutton explains this idea in his book entitled Theory of the Earth, “… we find no vestige of a beginning – no prospect of an end.” Hutton was the first scientist to conclude that the age of the Earth must be so incredibly old that the mind can’t begin to estimate its length.

Lyell even went to the Paris Basin to observe the rocks responsible for catastrophism, a theory in direct opposition with uniformitarianism. Based on catastrophism, the forces shaping the earth are not constant. However, when Lyell observed the mass extinction events in the fossil succession of the Paris Basin, he drew a very different conclusion. Lyell recognized that cyclical depositional environments and reoccurring extinctions show that there are controls that cause these processes to be recurrent. However, Lyell saw these processes as taking place over vast amounts of time and only appearing to be abrupt because of the scale of time preserved in the rocks.

Lyell’s theory of uniformitarianism would eventually coincide with plutonism as the foundation of modern geology. Uniformitarianism is also the first theory to predict deep time in western science. Deep time is the idea that Earth history is so deep that a person can’t possibly conceive the amount of time that has passed on planet earth. This further proved that the earth could not be a few thousand years old, as believed by theologian scientists.