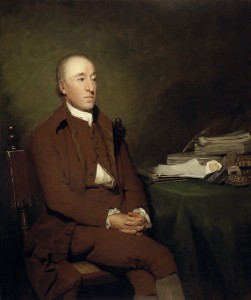 During James Hutton’s lifetime, the majority of the scientific community believed that the earth was only a few thousand years old. Hutton would eventually challenge these views with a theory called plutonism. Furthermore, Hutton’s ideas would eventually form the foundation of modern geology. However, Hutton didn’t take a clear-cut path to becoming a brilliant geologist.

Born in Edinburgh, Hutton began studying at the local university as a teenager. While attending the University of Edinburgh, Colin Maclaurin mentored young Hutton. Maclaurin imparted to Hutton the Newtonian laws of physics and the concept of deism. Deism is the idea that god created and no longer intervenes with the perfect, self-sustaining universe we live in. These ideas become crucial in Hutton’s later work as a geologist because it allowed Hutton to imagine a world driven purely by natural laws. Deism also allowed Hutton to hold true to his faith in god while making scientific observations of the earth system.

However Hutton left the University of Edinburgh to pursue medical school in Paris and Holland for five years. After medical school, Hutton moved back to Edinburgh in 1750. At this time, Hutton worked with James Davie in manufacturing a rare and profitable mineral called sal ammoniac. Eventually Hutton abandoned his business endeavors to work on a family farm called Slighhouses about 40 kilometers southeast of Edinburgh, Scotland.

Hutton’s life as a farmer was the turning point from his life as a well-rounded scientist to a genius geologist. Hutton experimented with various farming techniques and turned his family farm into the most successful farm in Scotland. While working on this farm, Hutton became obsessed with how wind, rain and gravity shaped the land on which he worked.

After leaving his life as a farmer, Hutton went back to Edinburgh in 1770. On returning Hutton was swept off his feet by the Scottish Enlightenment. The Scottish Enlightenment was a time marked by several scientific advancements facilitated by Scotland’s leading scientists. Specifically, James Hutton began working with Joseph Black, who discovered carbon dioxide, to identify how the different rock types observable at earth’s surface were formed. It was during this time that Hutton realized that heat and pressure are necessary in order to mineralize rocks. He further identified that the extreme heat and pressure necessary for forming rocks could only come from the interior of the Earth. This is the basis for James Hutton’s theory of plutonism which states that rock forming processes are driven by heat contained within the interior of the Earth.

Hutton later presented his findings to the Royal Society of Edinburgh. His theory of plutonism was in direct opposition with the more favored theory of neptunism at the time. However, during the 19th century, James Hutton’s theory of plutonism would gain favor and lead to the formation of a new scientific discipline, that of geology.