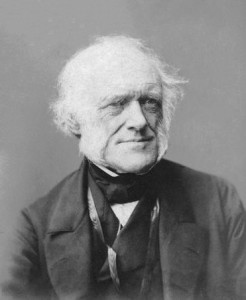 Charles Lyell was one of the most important scientists in the development of geology in the 19th century. Lyell took some of the brilliant, yet fairly convoluted work of James Hutton and expressed his ideas in a form that was easier to understand. As the author of Principles of Geology, Lyell laid down the foundation of geologic studies based on the ideas of James Hutton. Therefore, Lyell is the one responsible for the acceptance of uniformitarianism and plutonism by the general scientific community.

Before Lyell would write his famous textbook however, he first had to develop himself as a scientist. Lyell spent the majority of his youth in New Forest, southern England. As the eldest son to a naturalist, Lyell had access to a large library containing books on a variety of scientific topics. Lyell even picked up a habit of collecting butterflies and aquatic insects at as a young boy, a hobby that foreshadows his later interest in collecting rocks.

Lyell started his formal education at Oxford at the age of 19. After three years of studying at Oxford, Lyell received a bachelor’s degree with honours. It was during his time at Oxford that Lyell began his study of geology. During his breaks between terms, Lyell would travel and make geologic observations in the field on family vacations. Lyell would eventually move to London to study law but was clearly more interested in his geologic inquiry than his work as a lawyer.

Some of Lyell’s travels in particular, redefined the way he looked at the earth system. In 1822 Lyell visited Sussex to search of evidence of the vertical movement of rocks proposed by James Hutton. Lyell also met the founder of catastrophism, Georges Cuvier and examined the Paris Basin. Lyell even worked with Roderick Murchison while exploring France and Italy.

In 1830, Lyell published his book entitled Principles of Geology. In this book Lyell describes an earth system that is governed by physical, chemical and biological processes that occur very slowly throughout an immense geologic history to form the features observable at earth’s surface. Hence, Charles Lyell became the founder of uniformitarianism and brought many of the ideas of James Hutton into acceptance by the general scientific community. This made Lyell the foremost geologist of the 19th century. He even received praise from other geniuses of the time, as Charles Darwin once stated, “The great merit of the Principles was that it altered the whole tone of one’s mind, and therefore that, when seeing a thing never seen by Lyell, one yet saw it partially through his eyes”.

Lyell would eventually marry and continue to revise his editions of Principles of Geology. He would lecture but never stayed in one place too long, always preferring to spend his time traveling and studying geology in the field as apposed to being a dedicated lecturer. Lyell was eventually knighted in 1848 and made a baronet. He died while revising his 12th edition of Principles of Geology.