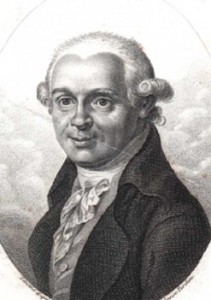 Abraham Gottlob Werner was the foremost geologist of the 18th century. Born into a mining family, Werner was surrounded by rocks throughout his childhood. Abraham Gottlob Werner’s father, Abraham David Werner was the inspector of the Duke of Solm’s ironworks in Wehrau and Lorendorf, Germany. By the age of nine, Werner had already gained experience in the iron works and received tutoring from his father on mineralogy. As a young adult, Werner bounced between an education at the Freiburg School of Mining and working for the Saxon mining service.

A year after the publication of this book, Werner dropped out of the Freiburg School of Mining without a degree. This didn’t keep Werner off his campus however. The Board of the Freiburg School of Mining offered Werner a position as a teacher of mining and curator of the university mineral collection. This offer was extended based on the success of Werner’s book, as well as his excellence as a teacher.

Werner accepted the offer and remained a teacher at the university for the rest of his life. During his years at the Freiburg School of Mining, Werner transformed the school into the top mining school in the world. Werner’s excellence as a teacher also brought him to be the most prominent geologist of the 18th century.

During Werner’s 40-year tenure at the Freiburg School of Mining, he promoted a theory called neptunism for the formation of rocks. Based on neptunism, all the rocks observable on Earth’s surface were once precipitated out of a vast ocean that covered the entire earth. Werner’s reputation as a teacher drew many students to Freiburg and allowed for neptunism to spread through the scientific community with ease.

However, because Werner remained at his position at the Freiburg School of Mining for his entire life, he never traveled much. Thus, his theory of neptunism was developed on the observations of a select group of rocks. The rocks Werner observed were well stratified and conformed to the theory of rock formation described by neptunism. Nevertheless, geologist began scouring the surface of the Earth observing all sorts of rock types and structures that didn’t conform to the Neptunian school of thought. This would eventually lead to the decline of neptunism, but not until after Werner’s death in 1817.