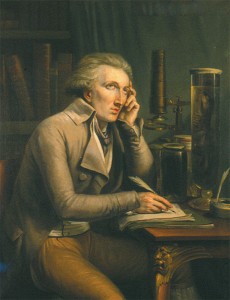 Georges Cuvier was a French scientist from the 18th century. Cuvier was responsible for the theory of catastrophism and a new way of organizing life based on comparative anatomy.

Cuvier’s work in comparative anatomy broke the paradigm in biology, that life evolved in a continuous lineage from simplest organism to man. Dividing all living organisms into separate categories based on anatomical observation was ground breaking for his time.

However, Cuvier didn’t accept evolution (although his work in the Paris Basin would eventually support the theory from Charles Darwin). Cuvier believed that the anatomy of all living species is so specific and crucial to its functioning that animals could not survive a significant change in their anatomy.

This theory along with neptunism described the earth system as possessing volatile forces that come in and out of existence to shape the earth’s landscape. These theories are in direct opposition with the theories of plutonism and catastrophism that would eventually take favor amongst the scientific community during the beginning of the 19th century.