Georges Cuvier’s sketch of stratigraphy in the Paris Basin. 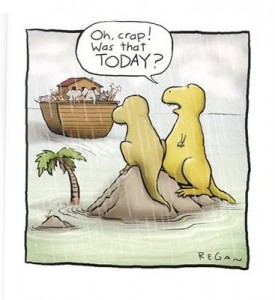 Catastrophism was a theory developed by Georges Cuvier based on paleontological evidence in the Paris Basin. Cuvier was there when he observed something peculiar about the fossil record. Instead of finding a continuous succession of fossils, Cuvier noticed several gaps where all evidence of life would disappear and then abruptly reappear again after a notable amount of time. Cuvier recognized these gaps in the fossil succession as mass extinction events. This led Cuvier to develop a theory called catastrophism. Catastrophism states that natural history has been punctuated by catastrophic events that altered that way life developed and rocks were deposited.

Although Cuvier hypothesized that the flooding of lowland areas could have been the cause of mass extinctions, he never really explained any force that could cause the flooding to occur in the first place. Therefore, an implication of Cuvier’s theory is that the forces acting on the earth must have changed periodically throughout earth’s history. Because Cuvier never identified these forces, many individuals believed these extinctions could have been the result of biblical floods or acts of god.

An avid supporter of catastrophism was Abraham Werner, the leading geologist of the 18th century. As we have seen before, Werner was the most influential supporter of neptunism, a theory stating that most of the rocks observable at earth’s surface were once precipitated out of a vast ocean. Therefore, Werner used catastrophism as evidence to prove that the earth had experienced mass floods throughout geologic history. However, both catastrophism and neptunism would eventually be discarded during the 19th century.