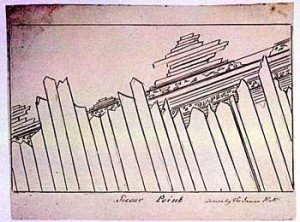 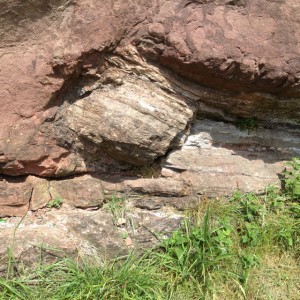 Evidence that granite is an intrusive rock observed by James Hutton at Holyrood Park in Edinburgh, Scotland. 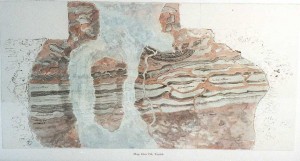 Evidence that granite is an intrusive rock observed by James Hutton in Glen Tilt, Scotland.

Although James Hutton was not the first to propose plutonism, he was the scientist responsible for expounding this theory to the Royal Society of Edinburgh and the general scientific community. Although plutonism would not come into favor until after Hutton’s death, he laid the foundation for the theory’s success. Charles Lyell would eventually synthesize the theories of plutonium and uniformitarianism into his textbook, Principles of Geology (published in 1830), allowing for its success in the 19th century.

Based on Hutton’s theory of plutonism, processes that create and arrange rocks into the current landscape are driven by heat concealed within Earth’s interior. Another fundamental aspect of Hutton’s theory of plutonism is that rock-forming processes are constant and slow. As a farmer, Hutton observed how resilient the land was to rain and wind. He recognized that Earth’s landscape is very slowly eroded away and deposited down hill due to gravity.

This is an example of Hutton identifying natural forces such gravity as a contributor to rock-forming processes. Hutton imagined these sediments being deposited into the ocean and being compacted and mineralized deep beneath the earth’s surface. Hutton further observed huge angular unconformities (such as the unconformity at Siccar Point, Scotland) that proved to him that after sediments had been eroded away and compacted into rock, they could be lifted back onto the land.

Hutton described this tilting as an “expansion” of the crust in certain places that brings marine sediments to the surface. Hutton never proposed a mechanism by which the modern idea of thrusting could take place, but he did correctly identify that internal heat must have been the driving force responsible for this phenomenon.

This theory for granite formation is clearly in opposition with Werner’s theory of neptunism, which states that granites are the oldest rock type and were once precipitated out of an ocean. Hutton made similar observations in Holyrood Park in the city of Edinburgh where dolerite sills were intruded in between sedimentary layers.

Hutton’s observations of intrusion, thrusting, erosion and deposition, as well as his theory of plutonism became the foundation of modern geology. The most progressive aspect of Hutton’s theory is that the earth is portrayed as a perfect, self-sustaining system dictated by natural laws. However, this is not to say Hutton did not believe in god. In fact, Hutton believed that god created that earth with such perfection that natural history did not require supernatural intervention in order to function.