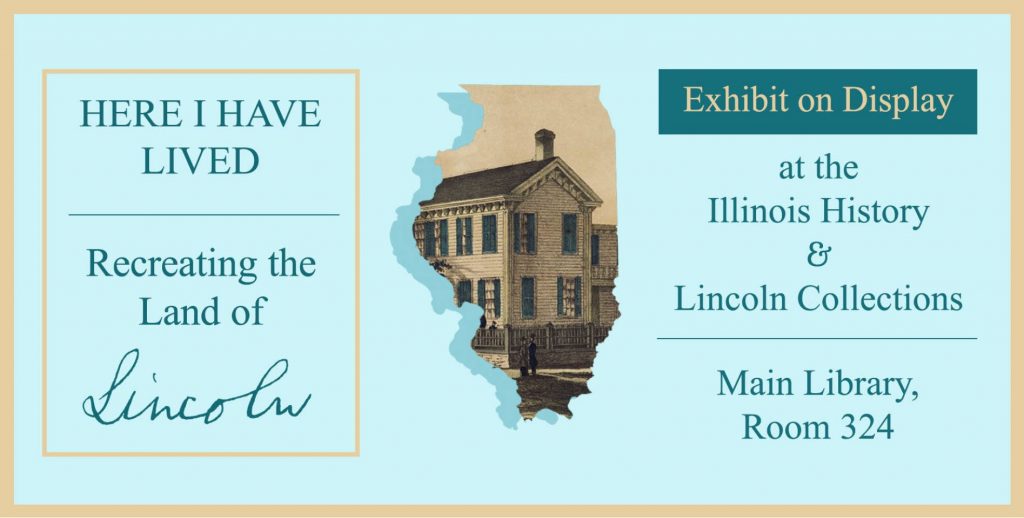 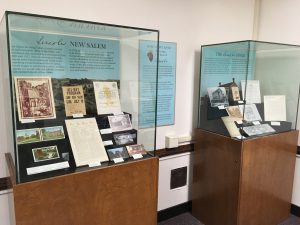 As a native of southeastern Kentucky, I often get the question “how did you end up here?” Part of my answer is that my interest in history growing up spurred several family visits to sites around Central Illinois like New Salem, the Mt. Pulaski Courthouse, Postville Courthouse, Oak Ridge, and Lincoln Home—all of which seek to tell the story of Abraham Lincoln. So when I came across various artistic and photographic depictions of these sites while processing the Lincoln Prints and Ephemera collection (MS 1045) with a colleague, I noted the marked changes in the historic structures and landscapes over time. This got me thinking about when, how, and why the now-revered places that make Illinois the “land of Lincoln” were altered and subsequently restored.

Where did you decide to begin with your search?

While I had already come across some items of interest in my work with the Lincoln Prints, I also began searching for other archival materials related to historic Lincoln sites through our Manuscript Collections Database. Initially, my idea encompassed a broader history of Lincoln heritage tourism in Central Illinois that would’ve incorporated objects and manuscripts from other places and projects like the Lincoln Way Papers (MS 1018) and Looking for Lincoln Ephemera and Memorabilia Collection (MS 911). After considering available exhibit space, the need for a digestible narrative, and advice from coworkers, I focused in on New Salem and the Lincoln Home—the two places where Lincoln lived for most of his time in Illinois, and two sites which have had much of the surrounding areas reconstructed or restored as well.

What was the most surprising thing you discovered?

Starting out, I wasn’t aware of the integral role the Civilian Conservation Corps (CCC) played in not only reconstructing New Salem village but also in building many of the trails, shelters, theaters, and centers at the park. The records of Camp New Salem emerged to showcase how historic restoration and public park development became a means of providing relief and temporary employment to hundreds of Illinoisans during the twentieth century’s deepest worldwide economic depression. Fittingly, Lincoln’s New Salem State Historic Site continues to be a boost to Illinois tourism—and many of the facilities still there today are direct products of CCC labor.

What is the most interesting thing you’ve learned while working on this exhibit?

It’s tough to single out one thing, but the influence of the Lincoln Home’s various tenants on the house’s care and restoration struck me. The first renter, Lucian Tilton, purchased most of the Lincoln family’s furniture—and took it with him when he moved to Chicago in 1869. The last renter, Osborne H. Oldroyd, whom Robert Lincoln loathed as a “deadbeat” and a “rascal” for (among other things) failing to pay rent, ironically received an appointment as the home’s first live-in caretaker after Robert donated the property to the state in 1887. Oldroyd was ousted in 1896 by Governor Peter Altgeld, but his replacement – loyal democrat Herman Hofferkamp – hung a portrait of assassin John Wilkes Booth over the fireplace and auctioned off original items that belonged to Abraham Lincoln. Both Hofferkamp’s auction and the discovery that the original house furniture purchased by Tilton perished in the Great Chicago Fire of 1871 meant that the Lincoln Home’s interior could never be fully restored.

What is your favorite thing you have found in your preparation for this exhibit?

I particularly enjoy the rare woodcut print depicting the reconstructed Rutledge-Camron Mill at New Salem by Champaign artist Fred Turner. A University of Illinois alum and later Dean of Students, Turner expressed his fascination with local history through a series of hand-carved woodcuts depicting historic places in Illinois. Most of the prints fold open to reveal a paper insert with text explaining each site’s history. Turner and his wife mailed these prints as Christmas cards to family and friends every year from 1946 to 1974. The entire series, featuring such other sites as the Fort de Chartres Chapel, Conkey Town covered bridge, and the Vandalia Statehouse, is available in the Fred H. Turner Wood Block Prints collection (MS 974).

This may be cheating, but as a runner-up I have to mention Lincoln’s New Salem: A Pilgrimage by popular early twentieth century artist Bernhardt Wall. Through Wall’s etchings, this beautifully illustrated book from 1926 tells the story of how “the deathless fame of Abraham Lincoln brings back from the dead the little town of New Salem.” A facsimile of one of the etchings is on display, but unfortunately I couldn’t exhibit the entire book due to its size and fragile binding.

What do you hope visitors take away from visiting this exhibit?

In just two cases, it’s impossible to convey the full stories of New Salem, the Lincoln Home, and the people who affected or were affected by these sites. So I hope that this exhibit may serve as a starting point for visitors interested in more deeply exploring the preservation of Illinois’s many historic towns and sites through our diverse collections. Here are just a few sources I would recommend for further research about New Salem and the Lincoln Home:

Here I Have Lived: Recreating the Land of Lincoln is on view at the IHLC now through February 2020.