The first official cemetery established for Springfield residents was the City Graveyard, four acres of land donated by Elijah Iles in the 1820s. Around 1830 John Hutchinson laid out a tract of six more acres adjoining the City Graveyard to the west. For many years, Hutchinson’s Cemetery was the primary burial ground for Springfield, located five blocks west of the State Capitol.

In June 1855, Charles H. Lanphier, a member of the Springfield City Council, advocated for the purchase of seventeen additional acres of land north of Springfield to establish a new municipal cemetery outside of the city. The city’s growth, sanitation issues, noise pollution, and need for more burial space all contributed to this demand. Springfield officials purchased seventeen acres north of the city, and in 1856 they purchased an additional eleven and a half acres to further expand the cemetery. A city ordinance was passed around this same time to prohibit the formation or expansion of burial grounds within city limits. Mayor John Cook proposed the name Oak Ridge for the new cemetery.

In 1858 the city appointed a sexton to serve as caretaker to the cemetery, and it was at this time that the cemetery began to keep records of interments. Another ordinance passed in 1866 prohibited additions to Hutchinson’s Cemetery and allowed owners of lots there to exchange them for equally sized lots in Oak Ridge Cemetery instead. Between 1865 and 1879, 652 bodies were moved from the City Cemetery and Hutchinson’s Cemetery to be reinterred in Oak Ridge Cemetery.

The city of Springfield dedicated the cemetery on May 24, 1860, and schools and businesses even closed for the afternoon. Abraham Lincoln and Mary Todd Lincoln are believed to have attended the event. James C. Conkling, a lawyer and politician who lived in Springfield, delivered the address at the dedication, saying, “here, with naught but the pure arch of heaven above us, and Nature in all her silent beauty and loveliness around us, we dedicate the City of the Dead.” 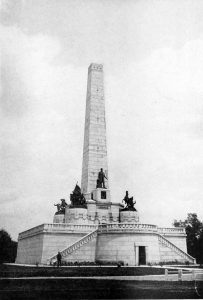 Oak Ridge Cemetery is the second most visited cemetery in the county, only after Washington, D.C.’s Arlington National Cemetery. Nearly one million visitors come to the cemetery each year to pay their respects. These high visitation number are largely due to Abraham Lincoln’s tomb. The tomb is the resting place of President Lincoln, Mary Todd Lincoln, and three of their four children, Edward, William, and Thomas. Designed by sculptor Larkin Mead, the tomb is 117 feet tall and is made of brick sheathed with granite. The Lincoln Tomb was designated a National Historic Landmark in 1960 and it was placed on the National Register of Historic Places in 1966.

Construction on the Lincoln Tomb began in 1868, and it was dedicated in 1874 with President Grant in attendance at the ceremony. Because of major design and construction flaws, the Tomb was largely rebuilt in 1900 through 1901 and once more in 1930 through 1931. There were also security concerns after thieves attempted to steal President Lincoln’s body in 1876, so his remains were moved to a level below the floor of the burial chamber after the first renovation was completed.

Since 1865 Oak Ridge Cemetery has grown to become the largest municipal cemetery in Illinois, and there are now over 75,000 interments. Abraham Lincoln isn’t the only notable figure at Oak Ridge Cemetery; many of Lincoln’s contemporaries are interred there as well. Oak Ridge holds over eighty dignitaries, including former governors and legislators. 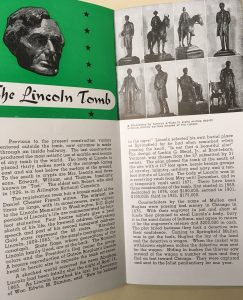 Check out the IHLC’s Herbert Fay Wells Collection of Lincoln Materials, 1891-1949 (MS 854) to see Lincoln Tomb brochures and photographs. Fay was a collector of historical portraits with a focus on Abraham Lincoln, and in later years he served as a custodian of the Lincoln Tomb. His collection contains materials related to his work, as well as Lincoln ephemera, drawings, and publications.