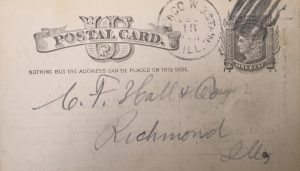 As the U.S. began to rebuild after the Civil War, the county experienced growth and a significant development in industry.  From large factories to aspiring producers, there was an increase in production, and new goods and services were available to an expanding population at lower costs. To draw in new waves of consumers, all types of businesses and manufacturers sought out new modes of advertisement.

One of these methods was with business postal cards or trade cards, which were small pasteboard cards with the company’s name, address, and information.  Some of these incorporated colors or an image to better catch buyers’ eyes. These postcards, or “penny postals,” were a particularly popular way to advertise and conduct business because they were a cheap and effective way for businesses to reach buyers and consumers. In 1873 the American Postal Service began issuing pre-stamped one cent postal cards, and by May of 1898 private publishers and printers were able to produce their own postcards and attach a one cent stamp to send their messages. Cards had an undivided back which was used for the address and mailing information only, so most cards had writing and imagery on the front. 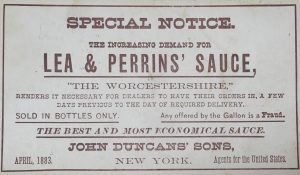 feature more than a thousand U.S. business postcards that were sent or received by C.F. Hall. Hall was from Dundee in McHenry County, Illinois. He worked as a grocer and dry good merchant and conducted business as C.F. Hall & Co. in Richmond, in Kane County, Illinois.

The cards in this collection, each measuring approximately 3×5.25 inches, document a wide range of products that were bought and sold in small-town northern Illinois stores, as well as Chicago and several out of state suppliers. Hall worked with many companies for his business, and he also placed orders directly with a number of traveling salesmen.

Many of the business cards in Hall’s collection come from sellers sharing prices of their goods. Sellers would lay out their goods and the costs in list form or include the information in a note format explaining what was available. 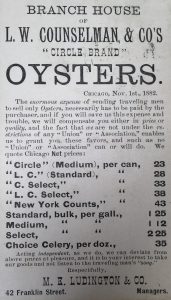 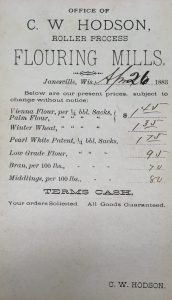 Other cards are appointment notices from salesmen who came to share samples of their goods with Hall so he could consider purchasing from them.  Many of the cards have “wait for me” written on them to request that Hall would hold off on making any other purchases of similar goods before sampling their own. 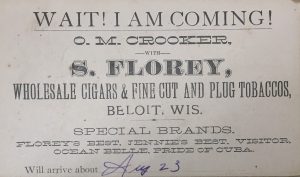 Some sellers sent cards offering to send samples or prices upon request, or they offered to send price listings in a separate catalogue. These often encouraged the buyers to place their requests or put in direct orders for the goods. 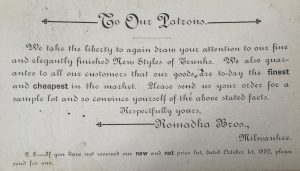 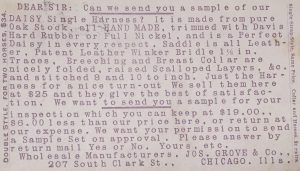 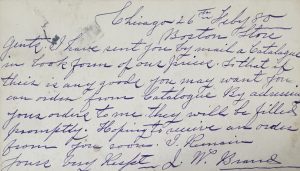 While many of the cards are in black and white or only feature text, some include color and design elements or images, such as this advertisement for a scarf as part of a neckwear line. 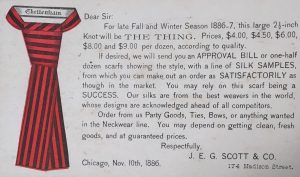 Business postal cards and trade cards continued to advance through the start of the 20th century with multi-colored lithographs, making them more popular with the general public. The C.F. Hall Business Postal Cards collection shows an evolving mode of advertising on the cusp of explosion in a time of great economic change. The vast range within this collection offers insight into Hall’s work as a grocer and merchant and presents a variety of businesses, styles, and approaches to advertising that reflect the acceleration of commercial transactions in Illinois in the late nineteenth century.