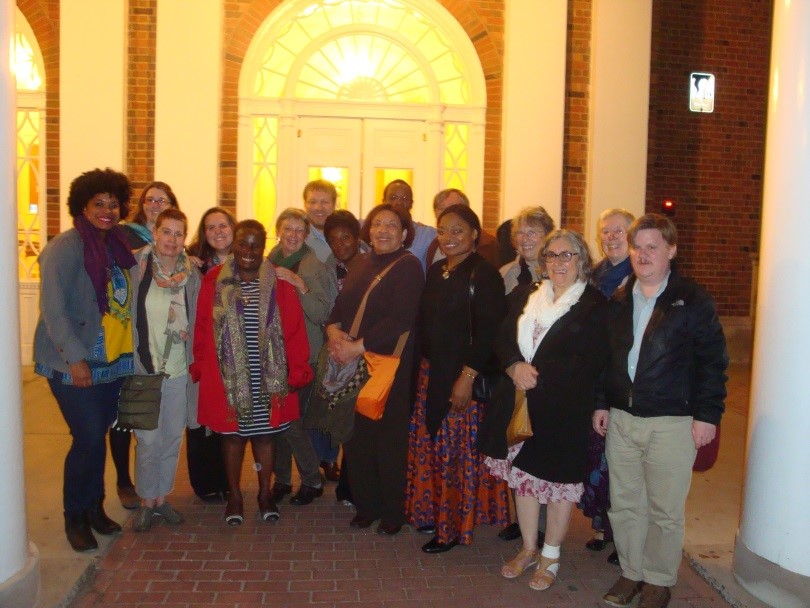 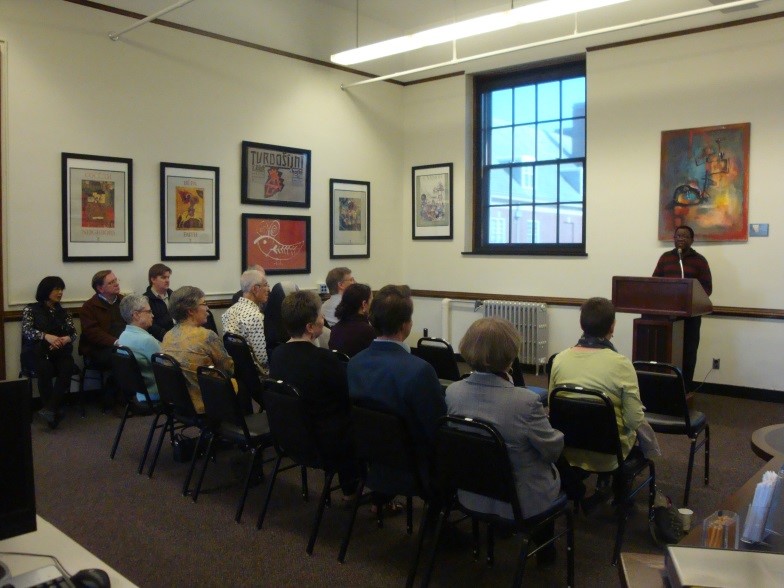 The librarians were warmly received at a Thursday reception in the International and Area Studies Library where University Dean Wilkin addressed the group. The meet and greet gave the information professionals a chance to say hello to familiar faces and to meet new ones. It was the evening’s events, however, that further warmed the tone of the affair. Guests were invited to the campus’ YMCA for dinner where traditional African foods including chicken yassa, a dish native to Senegal and common in other Western and coastal regions of Francophone Africa, and jollof rice were served. Local band Super Mazumzum played popular covers by African musical artists Miriam Makeba (South Africa), Fela Kuti (Nigeria) and Rex Lawson (Nigeria). Zambian graduate student at the University of Illinois Chipo Sakufiwa and guitarist Rick Deja led the group’s musical renditions. 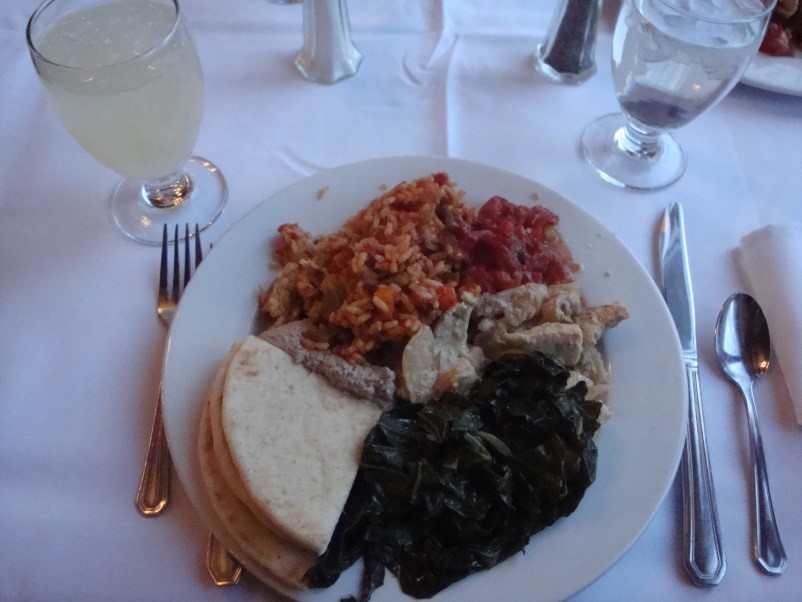 After dinner, University of Illinois entomology professor Dr. Barry Pittendrigh and Assistant Director of the Center for African Studies Dr. Julia Bello Bravo gave an enlightening presentation on their work with and for Scientific Animations Without Borders (SAWBO). SAWBO aims to provide animated, educational content in video format to people and communities whose literacy levels are diverse and whose information needs are high. Taking advantage of a strong trend known as “m-learning,” the use of mobile devices to address a variety of learning needs, Dr. Pittendrigh encouraged audience members to download and test SAWBO’s application. He emphasized the versatility of this platform in developing accessible media related to healthcare, women’s empowerment and agriculture in a variety of languages spoken around the world. Lastly, Extension System In Your Wallet (ESIYOW) was distributed to all in attendance which comes in the shape of a business card and serves as a highly portable and convenient USB drive for quick and easy information transfer. 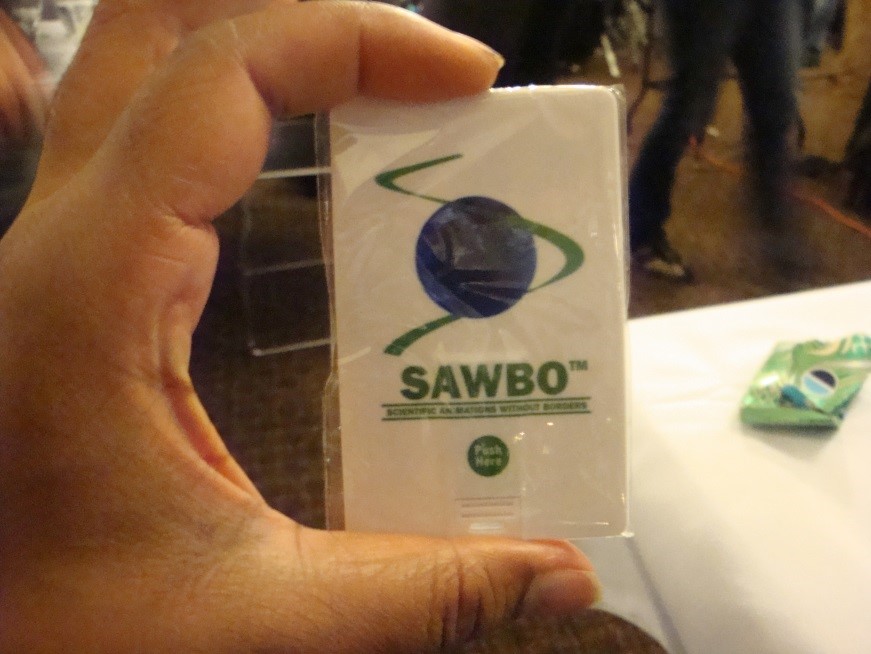 The following day, the ALC’s formal meetings began. Head of the International and Area Studies Library Steve Witt spoke to the audience regarding his experience overseeing the merging of multiple different area studies groups that were once largely autonomous. These include (Sub-Saharan) African Studies, North African and Middle Eastern Studies, Slavic, East European and Eurasian Studies, South Asian Studies, Chinese Studies, Korean Studies, Latin American and Caribbean Studies and a few more. This compiling of area studies inspired questions regarding professional buying trips supported by the university, the differences between area studies librarians and subject specialists and how to adequately provide support staff for such a diverse library. Other agenda items included the discussion of developing an online bibliography of Africa course that would be available to students at multiple universities, Title VI (a government source of funds stemming from the Higher Education Act of 1965), and upcoming panels and committees. 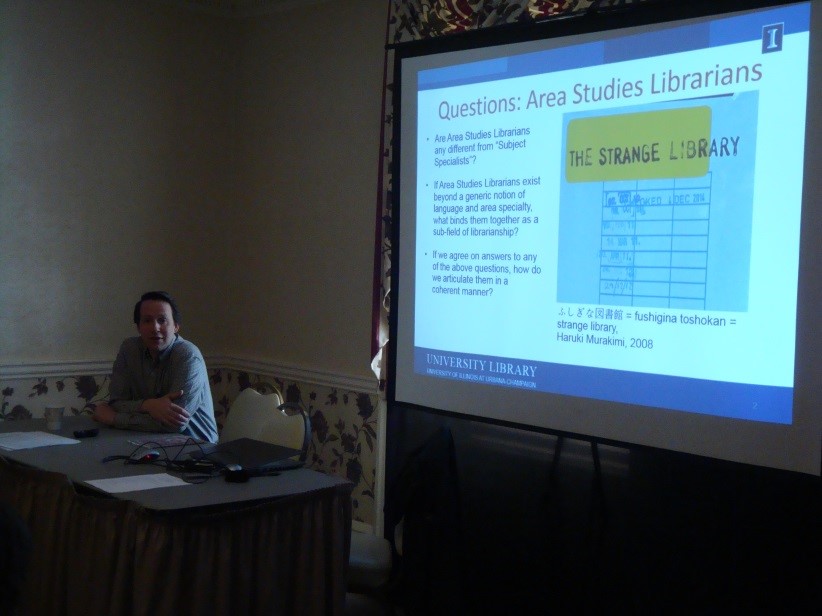 The next evening, Al Kagan invited everyone to his home where the next generation of Africana librarians was discussed, Sakufiwa returned to serenade the group and dinner was catered by local restaurant Layalina Mediterranean Grill. This event was one of Dr. Batoma’s and Al Kagan’s many collaborations, an important one being  their 2014 joint publication Reference Guide to Africa which was acknowledged earlier this month by the Research and Publication Committee (RPC). Al Kagan’s strong structure for the regularly offered U of I course LIS 530M Bibliography of Africa lives on and is led through the Graduate School of Library and Information Science (GSLIS). Overall, the weekend was spent in enriching communion, honoring the important work Africana and area studies librarians and library workers carry out in representing a continent, its histories and its many peoples. 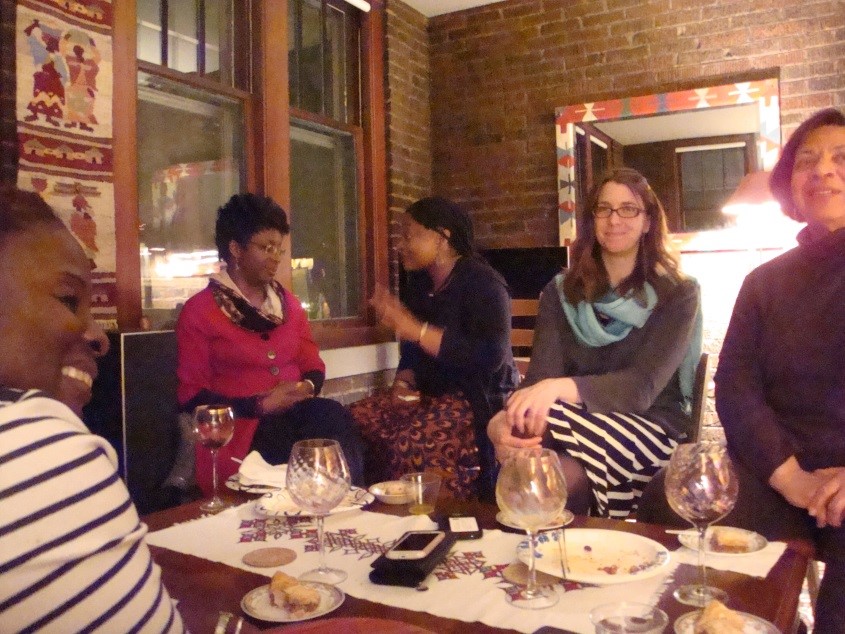 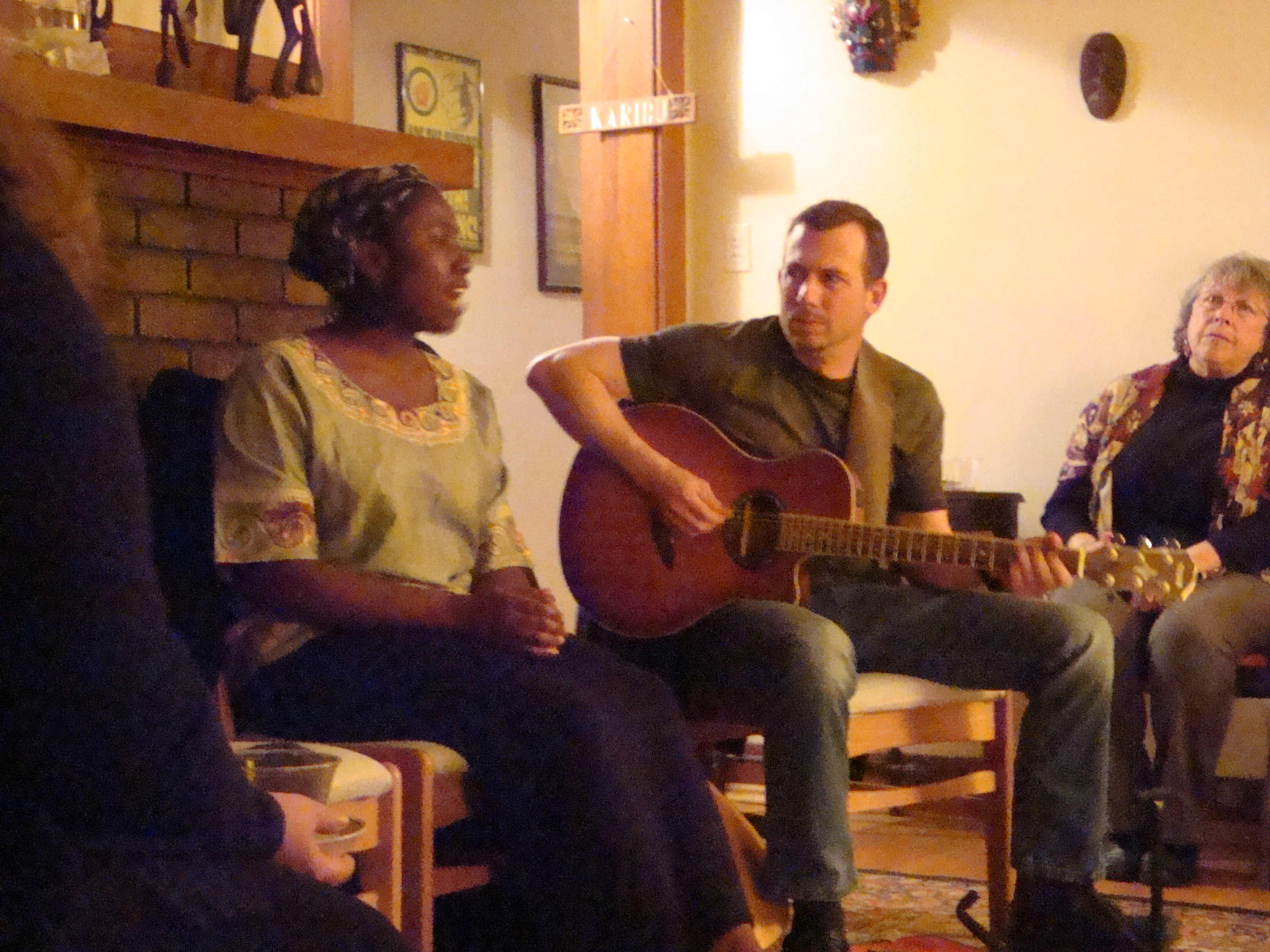 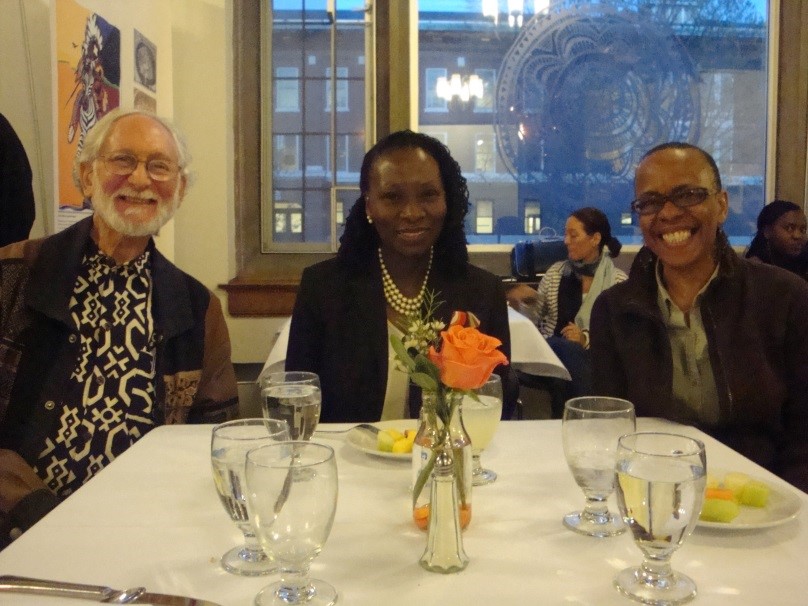 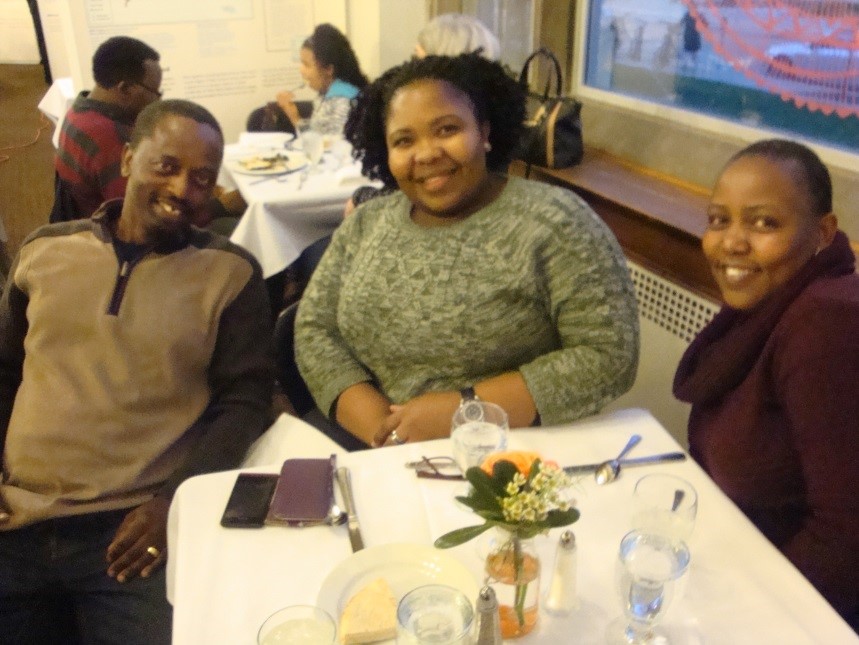 Current U of I graduate students from left to right: Mbhekiseni “Bheki” Madela from South Africa, Telamisile Mkhatshwa from Swaziland and Tumani Malinga from Botswana 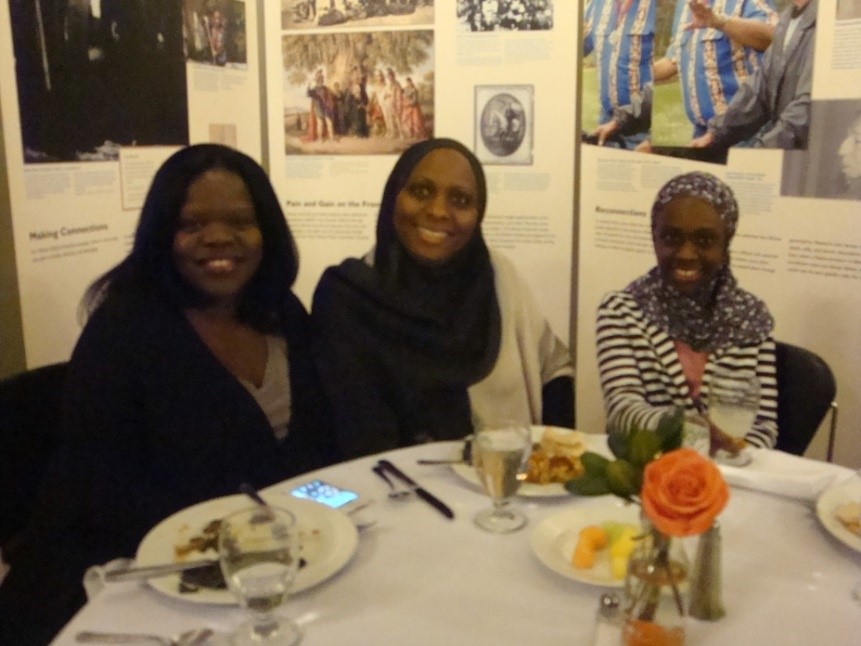 From left to right: Current U of I Kenyan doctoral student Anne Lutomia (Kenya), Associate Director of the Center for African Studies Maimouna Barro from Senegal and her daughter

With much help from the Information & Technology Department and hard work from various International and Area Studies Library employees, Africana Collections and Services is proud to announce the launch of its renovated website. This site serves as both a launching pad for Africana researchers throughout the U of I academic community and a place to advertise the wares of our print and digital collections. More than anything else, creators and contributors would like to facilitate access to a variety of Africana resources from one central and reliable location.

The Way Back Machine, a veritable internet archive, allows us to view former iterations of our site. The previous site, active as recently as 2013, relied on a simplistic layout with minimal colors and even fewer images.

One goal in the new site’s construction was to make the interface more dynamic and visually appealing. The model used for the new site was based on the Middle East and North Africa Studies’ page design. Note the multiple tabs that are easy to navigate, the prominent imagery to represent the region and the columns that lead to additional resources of interest and newly acquired titles.

The Africana group followed suit and developed a closely similar theme. Highlights on the new site include the scrolling RSS feed that highlights new titles in the catalog; the Dissertations & Theses page now features a downloadable pdf listing original works written by U of I graduate students from 2000-2014; and colorful  images representing both West and East Africa were culled from open source sites like Wikimedia Commons and Flickr to bring life to the E-Journals and Reference Resources pages.

As we continue to adapt the site to meet our users’ needs, we discuss a series of additional possibilities. For example, users might benefit from more instruction on navigating the Africana Film Database. Some preliminary information, for the moment, regarding the scope of the collection is provided under Reference Resources -> Research Guides -> Africana Film Database. Additionally, we have the special challenge of adapting a proper code to display works from the Africana collection in our RSS feed in languages of African origin and colonial languages, too. English, French and Portuguese, to name a few European languages, are spoken widely across the continent. However, we are verifying our settings to allow us to select works from the following languages as well:

The site is as robust as ever with the same amount and variety of resources. Now, however, it is more attractive to the eye and more current in its scope of documentation when it comes to works produced by our very own peers. We encourage you to explore, and after visiting the home page, check out our African Studies Internet Portal for a broad array of diverse resources and Other Africana Libraries that can be of interest to you. We send special thanks to Helen Zhou, Sabrina Jaszi, Robert Sarwark, Jon Gorman, Robert Slater, Atoma Batoma and Joe Lenkart.