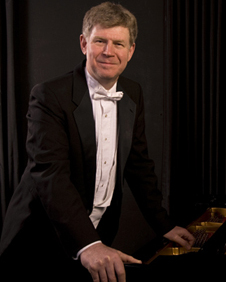 A native of Wolverhampton, England, Ian Hobson is recognized throughout the world for his masterful performances of the Romantic repertoire, his deft and idiomatic readings of neglected piano scores old and new, and his assured conducting from both the piano and the podium. Mr. Hobson is also renowned as a dedicated scholar and educator, who has pioneered renewed interest in the music of lesser-known masters Johann Hummel and Ignaz Moscheles. He is also an effective advocate of works written expressly for him by several of today’s noted composers, including John Gardner, Benjamin Lees, David Liptak, Alan Ridout and Roberto Sierra.

Active in the recording studio, Mr. Hobson has been engaged in recording a 16-volume collection of the complete works of Chopin for the Zephyr label. This edition includes approximately 45 minutes of Chopin music never before recorded, making Mr. Hobson the first ever to record the composer’s entire oeuvre as a single artist. Ian Hobson presented a 10-recital series devoted to the 200th anniversary of the Romantic Era’s two greatest composers for the piano: Chopin and Schumann, at New York City’s Dicapo Opera Theatre. In the 2011-12 season Ian Hobson presented the complete solo piano works of Robert Schumann in Urbana, Illinois.

Increasingly, Mr. Hobson is in demand as a conductor, particularly for performances in which he doubles as a pianist. He made his debut in this capacity in 1996 with the Stuttgart Chamber Orchestra, and has subsequently appeared with the English Chamber Orchestra, Poland’s Sinfonia Varsovia (at Carnegie Hall) and Pomeranian Philharmonic and Kibbutz Chamber Orchestra of Israel, among others.

Ian Hobson is also active as an opera conductor, with a repertoire that encompasses works by Cimarosa and Pergolesi, Mozart and Beethoven, and Johann and Richard Strauss. In 1997, he conducted John Philip Sousa’s comic opera, El Capitan, in a newly restored version with Sinfonia da Camera and a stellar cast of young singers. A fervent advocate of George Enescu’s music, he conducted and recorded the 2005 North American première of the operatic masterpiece, Oedipe, in a semi-staged version performed by Sinfonia da Camera on the 50th anniversary of the composer’s death.

An artist of prodigious energy and resource, Mr. Hobson has amassed a discography of over 60 releases. In the dual role of pianist/conductor, he and the Sinfonia Varsovia  recorded for Zephyr Rachmaninoff’s four piano concerti and Rhapsody on a Theme of Paganini – a tour de force no other performer has matched.

One of the youngest graduates in the history of London’s Royal Academy of Music, Ian Hobson subsequently pursued advanced studies at both Cambridge University and Yale University. He began his international career in 1981 when he won First Prize at the Leeds International Piano Competition, after having earned silver medals at both the Arthur Rubinstein and Vienna-Beethoven competitions. Among his distinguished teachers were Sidney Harrison, Ward Davenny, Claude Frank and Menahem Pressler, while, as a conductor, he studied with Otto Werner Mueller, Dennis Russell Davies, Daniel Lewis and Gustav Meier, and worked with Lorin Maazel in Cleveland and Leonard Bernstein at Tanglewood. Currently, Mr. Hobson is Emeritus Center for Advanced Study and Swanlund Professor of Music at the University of Illinois at Urbana-Champaign.
www.ianhobson.net