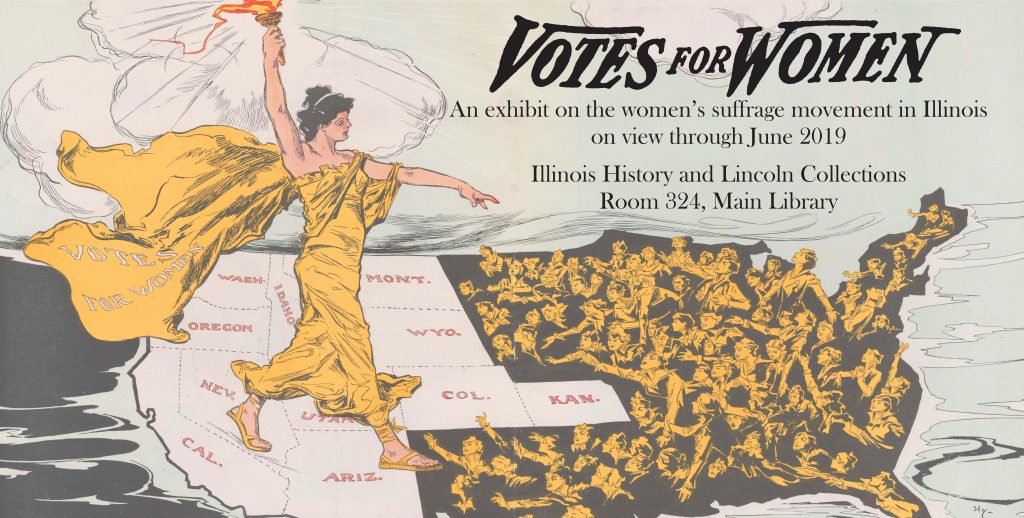 To celebrate the 100th anniversary of Illinois ratifying the 19th amendment, the IHLC is exhibiting Votes for Women, an exhibit on the women’s suffrage movement in Illinois. Read about Graduate Assistant Allison Kilberg’s experience and insights researching and curating this exhibit. 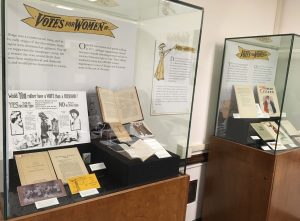 A few months ago, while doing research for another project, I stumbled upon some really cool women’s suffrage postcards from the Baker-Busey-Dunlap Family Papers (MS 830). I knew I wanted to display them at some point, so when I started brainstorming ideas for our spring exhibit they were at the front of my mind.  As I started researching the postcards, I realized that 2019 is the 100th anniversary of Illinois ratifying the 19th amendment, so it seemed like the perfect time to showcase some of the IHLC’s holdings related to the movement.

Where did you decide to begin with your search?

Initially I didn’t know much about the suffrage movement specific to Illinois, so my first step was to find some secondary sources for research using the library catalog. Illinois Women: 75 Years of the Right to Vote was especially helpful in providing a general overview of the fight for women’s suffrage in Illinois, and placing it in a national context. Once I had a better understanding of the movement, I began browsing the IHLC’s Manuscript Collections Database by subject terms, such as “Suffrage” and “Women’s rights.” This gave me a sense of what kinds of materials we had on the topic before pulling individual collections to look at their contents.

What was the most surprising thing you discovered?

During my research I found that the IHLC has a series of anti-suffrage bulletins authored by women from a group called the Illinois Association Opposed to Woman Suffrage. I had always assumed the groups opposing women’s suffrage were made up of men, but apparently there were many women opposed to it as well. They believed that being thrust into man’s political sphere would impede their responsibility to be good mothers, caretakers, and homemakers, and would prove detrimental to society.

What is the most interesting thing you’ve learned while working on this exhibit?

I had no idea that Illinois played such an influential role in the national fight for women’s suffrage. Illinois was the first state east of the Mississippi to grant women the right to vote in presidential elections, in 1913. Chicago was the 2nd biggest U.S. city at the time, so this was a huge deal on a national level and inspired those in other states to continue fighting for suffrage. Then, once the 19th Amendment to the U.S. Constitution was formally proposed on June 4, 1919, Illinois was the first state to ratify it, just six days later.

What is your favorite thing you have found in your preparation for this exhibit?

It’s hard to choose, but I think my favorite is probably the “The New Woman and the Old Man” Stereoscopic card. Meant to be viewed on a stereograph, a popular viewing device in the late 19th century that gave the illusion of a 3-dimensional image, the card shows a caricature of a modern woman at the time. It depicts a farcical reversal of gender roles in a couple’s home, with the husband doing the laundry, watching the children, and tying the wife’s shoe as she prepares to go for a bike ride in her bloomers. The image reveals a lot about opposing attitudes toward women’s rights at the time. The item on display is a facsimile because the original card cannot be exposed to light for an extended period of time, but it can be viewed on request. We also have a stereoscope that visitors can view.

What do you hope visitors take away from visiting this exhibit?

It was tough to represent the entire Illinois women’s suffrage movement in such a small space—there’s so much more I wanted to include! So I hope this exhibit serves as an introduction to Illinois’s role in the movement rather than a comprehensive overview, and encourages viewers to learn more about it by taking a deeper dive into some of our books and manuscript collections. Here are just a few sources I would recommend for further research:

Votes for Women is on view at the IHLC now through June 2019.