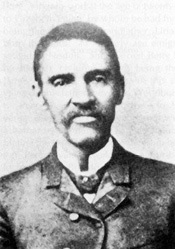 This blog post is part of a series on Black History Month. Please visit the Bicentennial Celebration – February page for an introduction to the topic and other blog posts in the series.

In 1884, former Republican governor Richard J. Oglesby carried the vote to again assume the state’s highest office. Applying for “any honorable position” in Oglesby’s administration was Southern Illinois politician John J. Bird. A longtime advocate for African American voices in Illinois government, Bird served in various public offices throughout his life and helped push for equality in the post-emancipation Midwest.

John Bird and his family spent some years in both Canada and Ohio before they settled in Cairo, IL. In 1873, he was elected as the town’s police magistrate, the first African American public official in the heart of Little Egypt. In this role, Bird became one of the most influential black leaders in Southern Illinois. Alongside others like William T. Scott, his fellow co-editor of the Cairo Gazette, and Reverend Thomas Strothers, Bird pressed issues like disparities in education and successfully campaigned for the election of several other African American officials. This caused a transformation in Cairo from a Democratic to a Republican stronghold.

In that same year of 1873, then-governor John L. Beveridge appointed Bird as a trustee of Illinois Industrial University (now the University of Illinois) in Urbana, also making him the first known black trustee of any majority white college in the United States. This role suited Bird well as he was known to be a champion for equitable education, believing that it was the key to political change. He served in this post until 1882 when he resigned for unknown reasons.

Not limiting himself to Cairo, Bird was also active on the political stage statewide and spoke and campaigned as far north as Chicago. He and Scott were both prominent proponents of the Republican ticket throughout Illinois in the 1876 election. Bird also attended several State Colored Conventions as a delegate and speaker. As a rift began to develop between the Republican Party and some black citizens, Bird headed a faction at the 1883 convention that hoped to heal the divide rather than allow for a complete splinter into an independent party. Yet while Bird generally believed that the Republicans were the best bet for securing civil rights, he simultaneously followed Frederick Douglass’ advice that African Americans could not afford to follow any party blindly. Bird had already demonstrated this caution at the 1880 State Colored Convention where he set up a non-partisan committee to monitor the status of black civil rights issues on both sides of the aisle.

Want to learn more about this fascinating figure from Illinois history? Stop by the Illinois History and Lincoln Collections to read up on John Bird and his world.