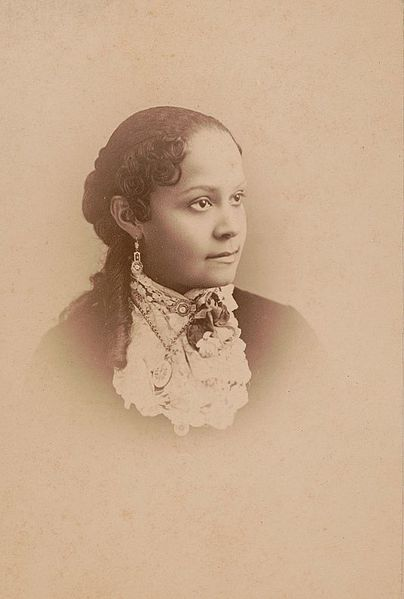 This blog post is part of a series on Black History Month. Please visit the Bicentennial Celebration – February page for an introduction to the topic and other blog posts in the series.

Fannie Barrier Williams was born in Brockport, New York on February 12, 1855. Brockport was a non-segregated community outside of Rochester and her parents were of high social standing. Brockport was said to be “north of slavery,” and because of this Barrier Williams enjoyed a much more privileged upbringing than those living in the South.

Brockport had never seen slavery or segregation due to New York legislation that gradually led to the emancipation of slaves. This emancipation of New York slaves culminated with 1827 legislation which ended slavery in the state. New York was also influenced by the Second Great Awakening which emphasized human freedoms. This Christian revival effectively transformed views on slavery and helped to advance the abolitionist platform. However, despite social inclusion in Brockport, political exclusion of blacks and people of mixed-race still existed.

Barrier Williams moved to Missouri during the Reconstruction era in hopes of teaching newly freed slaves. However, there existed more racial prejudice and segregation than she was familiar with. Eventually, she moved to Washington D.C. where she was introduced to a large community of black elites. It was here that she met her husband, Samuel Laing Williams. The couple eventually moved to Chicago, where Barrier Williams gave up teaching to help found clubs and continue her role as an activist.

Once in Chicago, Barrier Williams became acquainted with the elite black community and became active among Chicago reformers. Her work mostly revolved around rights for women of color, and she helped found the National Association of Colored Women in 1896. Prior to this, she played a leading role in changing the admittance requirements for the exclusive Chicago Women’s Club to not include race. Barrier Williams was also involved in labor activism through the Illinois Women’s Association.

Despite being involved in Chicago’s elite black circles, Barrier Williams worked beyond them in order to gain rights for non-privileged African Americans, particularly black women. Barrier Williams achieved significant recognition for protesting the lack of black representation at the 1893 World’s Fair. For this she was appointed “clerk in charge of colored interests” in the Department of Publicity and Promotion. She was also invited to give two speeches, one to the World’s Congress of Representative Women and another to the World’s Parliament of Religions.