By Steve Witt, Head of the International and Area Studies Library; Director of the Center for Global Studies

Last week’s Glocal Notes post featured the coming centenary of the armistice that ended the First World War by telling the story of the destruction and construction of the KU Leuven Library. The Leuven library speaks to the efforts of the library profession to collectively donate books towards efforts to replace what was so tragically lost during the war. Books and libraries played other roles in the war, and librarians served both on the battlefield and in prominent roles aimed at getting collections of books to soldiers.

This begs the question of what librarians were doing to promote the cause for peace before the “Great War”? The UN International Day of Peace on September 21st provides an opportunity to reflect on efforts of librarians and bibliographers to promote peace and work towards ideals that promoted what the UN Declaration of Human Rights now calls the “inherent dignity and equal and inalienable rights of all members of the human race” – an idea that to this day remains elusive to both implement socially and instill in the consciousness of people.

In the early 20th century, librarians and bibliographers worked cooperatively to develop international professional networks and practices to both further the profession of librarianship and contribute to human progress. In Belgium, Henri La Fontaine (winner of the 1913 Nobel Prize for Peace) and collaborator Paul Otlet strove to organize the world’s knowledge as a means to bring about peace. To this end, Otlet created the Universal Decimal Classification System (UDC) and worked to organize all knowledge globally. La Fontaine and Otlet were trying to change the tides towards peace through what they described as “facts” and “institutions.”  La Fontaine asserted that:

“we must oppose facts which are in contradiction with [peace], but especially create institutions which will be the denial of the pretended anarchy existing between the peoples” (1911, p. 1).

The “facts” that La Fontaine sought to share were to bring people “in contact and induce them to enter in relation the ones with the others, notwithstanding the difference of their languages, opinions and races. The facts are the improvements realized by the conscious and unconscious contributions of men of sciences and technics (sic) pertaining to the most various peoples” (p.1). For organization, they worked to create a system by which the “scattered” small groups of specialized organizations could:

“become conscious of the immanent force which is at their disposal. This force we call internationalism: it is the strongest cause of peace” (p. 2). 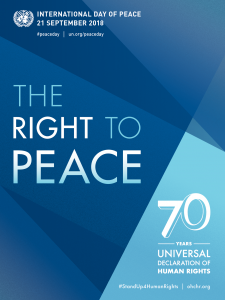 Librarians in the US were working towards similar ends, though often focused on using the public library as a vehicle for social change. Many urban public libraries were active in promoting peace studies and literature through their collections and engaging in what many contemporary librarians may consider Radical Cataloging. For example, in 1908, the Brooklyn Public Library published a 57-page list of books on peace and internationalism, and libraries in Denver, Boston, and Buffalo soon followed suit (Bowerman, 1915). By 1911, George F. Bowerman, Director of the Public Library of the District of Columbia, proposed the use of public, college, and school libraries to further international peace through the collection of books on peace and global affairs (Scott, 1911). The International Association of International Conciliation went so far as to insert cards promoting books and periodicals on the peace movement into the catalogs of American Libraries.

In 1912, the New York Library Club held a meeting on the topic of “The Relations of Libraries to the Peace Movement” (Quieted Germany, 1912, p. 9). Paul Brockett, of the Smithsonian Institution Library, “told of some ways in which librarians and teachers might co-operate to encourage the spread and accessibility of peace literature” (p. 9). The question of the profession’s role in advocating peace continued after the war began in Europe. At the 1915 American Library Association Annual Conference in Berkeley, California, George Bowerman gave a paper titled How Far Should the Library Aid the Peace Movement and Similar Propoganda? Bowerman asked his colleagues what they could do to bring about “peace that shall last” and whether there were “special considerations that may properly affect our attitude towards the peace movement” (Bowerman, 1915, p. 129).

Moving forward 100 years, we still confront many of these same challenges and questions that revolve around peace, justice, and role of our institutions in bringing these ideals into a reality for all humans. As we observe the UN’s International Day of Peace, perhaps it is a good time to reflect on the profession’s history of working towards a sustainable peace and consider ways in which we contribute to the UN’s goal for “Peace, Justice and Strong Institutions.”

Bowerman, G. (1915). How far should the library aid the peace movement and similar propaganda? Bulletin of the American Library Association, 9(4), 129-133.