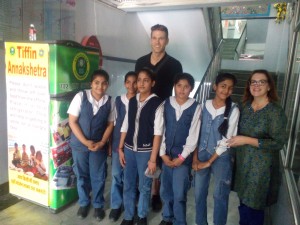 Robbie and Alison, interns from U.S. doing internships on food wastage at Annakshetra, with the students in school premises. / photo courtesy of Annakshetra

This post is part of the ADM Institute’s #PreventPHL blog campaign, following up on the First International Congress on Postharvest Loss Prevention. To read more posts in the series, click here.

The impact of food waste at schools is not just financial. Food waste can be seen as a particularly significant issue because, when food is wasted in schools: the embedded energy from growing, transporting, storing and preparing food is also wasted; the money spent on buying and preparing the food is wasted and costs are incurred in treating and disposing of it; and perhaps most importantly in the context of schools, children are not gaining the nutritional benefit of the wasted food. Therefore, in order to identify what could be done to reduce food waste in schools, Annakshetra launched a special campaign for students.

Annakshetra has now stepped in to address the issue of the food loss at schools and started its campaign ‘Tiffin Annakshetra’. Mothers pack kids’ lunches with healthy food, a significant amount (about 25 to 35%) of that food ends up in the trash. As long as children have been picky eaters, wasted food has been part of the deal. Therefore, awareness among children is needed to stop food waste. Children are the best messengers to society; they will further spread the message to create a movement to ‘No More Food to Waste’.

Annakshetra has installed refrigerators in few selected schools at Jaipur India. The fridge is accessible to all students and it will be a place where any student can leave leftover food of any type and quantity. The Annakshetra team will subsequently come and collect the food and deliver the same to the needy persons. 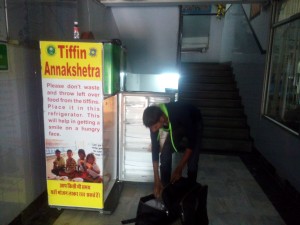 An Annakshetra representative collects food on daily basis immediately after the recess time at school. / Photo courtesy of Annakshetra

“In a recess time of half an hour, you are in a rush to eat quickly and get outside” commented a teacher. Aim was to spread the message of reducing food waste, minimizing the environmental impact and finally monetary savings, which was very taken by the students and the fridge was found overloaded on the very first day. The results coming up are incredible! The children were full of enthusiasm when they learnt the concept and purpose of Annakshetra. They were glad they had an opportunity to discuss an issue that affects so many people and can make a small contribution in addressing that. The food coming on daily basis is being tracked. Students are displaying real josh on the very first week. Specially made sugar packets of 250 gms, raw tomatoes, 100 gms of onion etc surprised everyone. It is not the quantity but the food articles which students are especially getting from homes and placing in the refrigerator which displays the spirit. Best was a Rs 5 chocolate found in the refrigerator. Again not the cost or quantity but hats off to one who thought of giving to someone else then enjoying him/herself.

By incorporating food-waste awareness and habits at schools, Annakshetra is truly trying to make a small meaningful adjustments in our daily wastage and eating. Many more schools have given consent for similar activity in their school campuses which is going to follow soon. It is making an attempt to implement small changes that will make a big difference in the amount of food we throw away each year. The resources we conserve today will help feed our great-grandchildren, who may find themselves with a different set of problems than “too much food”.

“ANNAM PARABRAHMASWAROOPAM,” says our Indian philosophy. This means that food is equal to God as told by our great ancient Sayers. But we, their descendants, are we giving the same amount of respect to this age-old God? Frankly, most of us do not. Result: Millions of our fellow beings are dying in hunger when millions of tons of food is being thrown away, wasted, discarded, whatever; for no good reason most of the times. Other times there are a few good complications because of which food is wasted. This is a very simple problem with colossal possibilities of simple solutions. In brief it is “Don’t waste food; Give it to others.” By incorporating food-waste awareness and habits in students, Annakshetra is truly trying to make a small meaningful adjustments in our daily wastage and eating. Scientific inventions are creating plenty but commercial conventions are creating scarcity. Production units have become partly destruction units. Civilization is moving forward (only to say) but our values are actually moving backward. Annakshetra is making an attempt to implement small changes that will make a big difference in the amount of food we throw away each year. The resources we conserve today will help feed our great-grandchildren, who may find themselves with a different set of problems than “too much food”.

The blog entries in this #PreventPHL series are by students and members of the PHL Prevention community of practice. The opinions expressed are those of the individual authors and do not necessarily reflect the position of the ADM Institute. In addition, none of the statements should be considered an endorsement of any person, product, or technique by the ADM Institute.