Morris Birkbeck was an early settler in southern Illinois at the beginning of the 19th century. He was also a successful author and strong advocate for pioneer settlement in Illinois. Birkbeck was one of the founders of the English Settlement in Edwards County, Illinois, and he later served briefly as the Secretary of State of Illinois in 1824.

Birkbeck was born in Settle, England, on January 23, 1764 to influential Quaker Morris Birkbeck and Hannah Bradford. By the age of thirty he was farming 1500 aces in Surrey, and he was the first person to raise merino sheep in England. Birkbeck was liberal in both religion and politics, and he grew frustrated with high taxes from the government and being tithed by a church that he did not support.

In 1817 Birkbeck immigrated to the United States, following in the footsteps of his friend George Flower, who had gone earlier. After traveling through Virginia, Pennsylvania, Ohio, and Indiana, Birkbeck and Flower settled in Illinois and established a colony for English farmers. The land tracts they purchased in Edwards County became known as the “English Settlement.”

As Birkbeck established himself in Illinois, he wrote two popular books upon his arrival to describe his experiences in America and encourage others to follow. The first book, Notes on a Journey in America, from the Coast of Virginia to the Territory of Illinois, was published in 1817. Birkbeck notes in his introduction that he wrote the book for friends and acquaintances back in England that he wished to share information with; he chose to publish the book rather than send letters to everyone he wished to address.  After offering detailed observations of his journey from Virginia to Illinois, 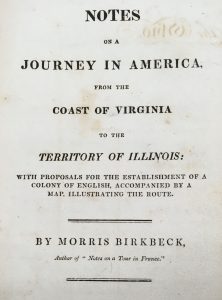 Birkbeck described his plans to settle:

It is the intention of my friend, Mr. Flower, and myself, to purchase, on terms as favorable as can be obtained from the government, one, or more, entire townships in the Illinois territory, where the country is partly prairie, and partly woodland. A township comprises thirty-six square miles, or sections of six hundred and forty acres each; in all, twenty-three thousand and forty acres. These lands we propose to offer (on terms proportionably [sic] favourable) to a number of our countrymen, whose views may so far accord with our own, as to render proximity of settlement desirable.

Birkbeck went on to publish Letters from Illinois in 1818. The book is a compilation of letters, mostly to friends or to strangers who had reached out to Birkbeck for advice or information related to migration. He published the letters in the hopes that his responses would find widespread use amongst readers and inspire more Europeans to take the leap to immigrate to America and journey west. Birkbeck described the land’s advantages for agricultural endeavors and cost of living, and he went on to write about the general satisfaction he had experienced with his decision to travel west:

Thus I see no obstruction to my realizing all I wished for on taking leave of Old England. To me, whose circumstances were comparatively easy, the change is highly advantageous; but to labouring people, to mechanics, to people in general who are in difficulties, this country affords so many sure roads to independence and comfort, that it is lamentable that any, who have the means of making their escape, should be prevented by the misrepresentation of others, or their own timidity.

These books provided great detail about life in the Midwest and offered numerous reasons for potential immigrants to pick up their lives and depart for America. Each book was tremendously successful and generated significant publicity for Illinois. Notes on a Journey in America ran through eleven editions in English in two years and was also published in German, and Letters from Illinois went through seven editions and was also published in French and German.

Birkbeck bought over 26,000 acres of public land in Edwards County between 1817 and 1818, either for himself or others. The Morris Birkbeck Papers (MS 469) contain an original deed from 1822 in which Birckbeck sold a parcel of land in Edwards County to James Forest Jackson. The collection also includes a list of land tracks with a map of their locations that Birkbeck had entered at the Kaskaskia Land Office.

Birkbeck was also an active anti-slavery advocate. In 1823 when pro-slavery members of the Illinois legislature proposed to remove restrictions on slavery, Birkbeck wrote a series of anti-slavery letters under the pseudonym Jonathan Freeman that were published in local newspapers. He also published a pamphlet under his own name that argued that slavery would lower land prices in Illinois and deter prospective settlers from Europe and the free states of America. The proposal to remove restrictions was ultimately rejected in 1824. That same year, Birkbeck was appointed Secretary of State of Illinois, and he served for three months before the legislature’s pro-slavery majority rejected his nomination. In 1825, Birkbeck drowned while crossing a river on his return trip from a visit to Indiana.