In the past two weeks I have done stitching at the FabLab, participated in Make-a-thon and continued working on my final project.

So, first it was an interesting experience using “3D” sewing machines at the Fablab. I decided to make a bear. I first downloaded a black and white picture from the web and then edited it a little bit and added a brown color to the bear. And it was ready to go to the sewing machine. 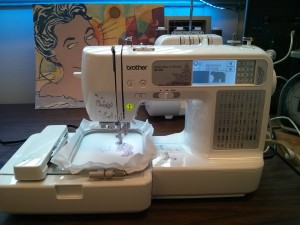 It’s kind of cool that it shows a picture of the bear on its small screen. By putting a string in the right place on the machine (there are 7 steps to do it) it was ready to start stitching. 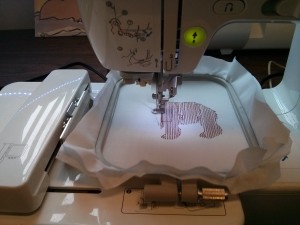 That is how it looked in the beginning….the bear had legs and the head was to come soon. Essentially, the machine did everything for me, I just had to wait for it to be done. 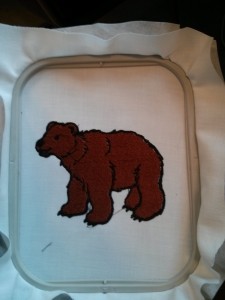 Here is the ready bear….but something else had to be done. I cut off the extra white material around the bear and put a sticky paper on the back side of the bear. Then I ironed it so some strings in the back wouldn’t stand out. And this is how the final product looked like. 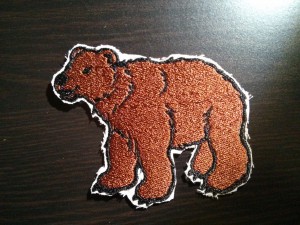 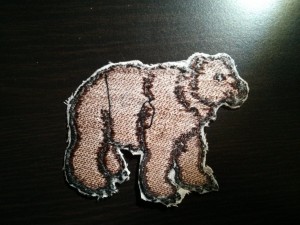 Then, on April 12th my teammates and I participated in Make-a-thon. It was a great event that allowed many people to try their skills in creating/making something new. The topic of the event was a “Senior accessibility”, which meant to create something that would help elder people in their day to day activities. We created a sensor on a pill box which elder people would use to keep track when they need to take their medication. Then we also wanted to create a wristband that would receive notification of when to take the medication. However, our project is not complete, and we are still working on finalizing it.

Here is Amanda Kowalski working with arduino to make the sensor functioning. 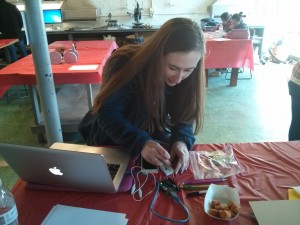