I held off on this reflection until after we finished our Make-a-thon creations, but this weeks “making” stepped up to a whole new level.

We kicked it in the FabLab again back on Tuesday and did some super cool work with Arduinos. I have absolutely NO background when it comes to coding. If I ever found myself looking at code, it was because I pressed the wrong button on my laptop and something weird happened and I was panicking. Suddenly, I was writing my own code to make something light up, eventually making my own motion sensor which was so freakin’ cool! It was so simple what I was doing but it still yielded a really really exciting result. I was so proud of my little light that I was ready to jump into the electrical engineering career path 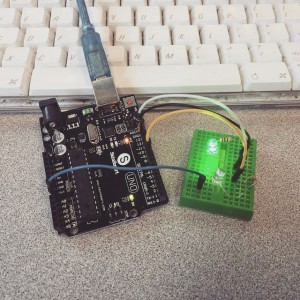 The next endeavor was the Make-A-Thon. I hopped in bright and early on Saturday morning and got to thinking about what could truly better the lives of the elderly. I was toying with the idea of a toothbrush with an easier grip, but then it occurred to me, why just a toothbrush? Why not create something adaptable to all sorts of different tools? (pens, pencils, utensils ect.) So I sketched out an adaptable gripper that looked like a bean with a hole in it. Kavin and Lin joined me and we all put our ideas together when it came to uses, material, and how we were gonna get this thing done.

We toyed with the idea on Fusion, but I was having a ton of trouble learning the command to cut the hole. Anyone I asked seemed to find this seemingly simple task super difficult as well, so there we sat. Befuddled. I threw it into Solidworks to see if I could do it that way but that was a struggle as well. All hope was slowly disappearing until one of the staff members found us and he knew what to do! What had taken hours, we were able to complete in a few minutes with his help. In the end, we created the Lima-Gripper. It adapts to arthritic hands to ease simple tasks and create a comfortable hold on smaller objects. Dexterity becomes an issue for those with severe arthritis, Parkinsons, as well tremors. We wanted to create something that alleviated that problem. We wanted the grip to be adaptable, so it could fit onto a multitude of objects, but have enough friction to stay on the objects it was placed on. The outside would have a soft outer grip shell, while the inside would be silicon. Bada-bing, bada-boom, The Lima-Gripper. 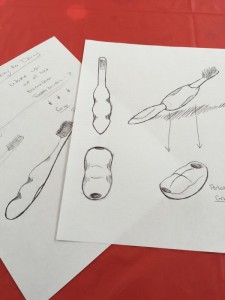 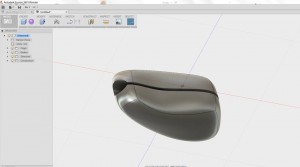 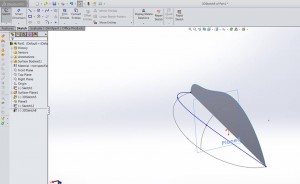 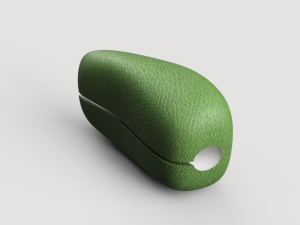 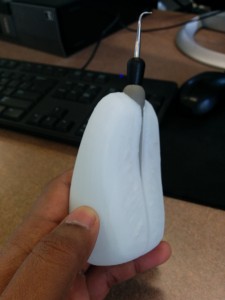 It was a blast working with Kavin and Lin. We had a really fun team dynamic, and we had some super cool ideas together. Kavin was a huge contributor with his knowledge of some crazy product- FatGripz. They’re some ridiculous tool for body-builders to improve grip on weights, but they were strangely applicable to our idea. He did some solid research in regards to material, as well as how they can help with what we created. I had only signed up for Saturdays making session so him and Lin both rocked it for the presentation. We were a solid team, and the entire experience was SO much fun!