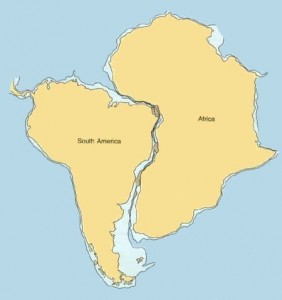 It was no mystery that Africa and South America appear to fit together like a jigsaw puzzle. This was observed and noted as early as 1596 by Abraham Ortelius (Continental Drift). As time progressed, other forms of evidence emerged supporting that the continents were once joined as one. In the mid 1800’s, Antonio Snider-Pelligrini acknowledged that the same plant fossils were in the coal beds of Europe and North America at places where the continents seemed to have fit together geographically (Plate Tectonics: Continental Drift). With the addition of more evidence, some members of the scientific community began to believe that the continents were in fact not fixed in place. In 1908, Frank Bursley Taylor proposed to the GSA that continents moved on the Earth’s surface, and mountains were uplifted by continental collisions (Frank Bursley Taylor).   He based this on the geographic fit of Africa and South America, along with research he did on their respective mountain chains (Frank Bursley Taylor). He believed that lunar gravity dragged the continents to the equator during the Cretaceous (Continental Drift). Robert Mantovani, an Italian geologist, proposed in his works published in 1889 and 1909 that the continents were once one single mass (Robert Mantovani). In these he described his expanding-earth theory. He proposed that the earth was originally much smaller and that a single continent covered the entire earth (Robert Mantovani). Then, volcanic activity due to thermal expansion broke the continents away and created the oceans (Robert Mantovani). Geologist Howard Baker provided the first detailed reconstruction of the continents as one supercontinent (Mountain Building and Drifting Continents). His theory included that the continents broke apart, but his mechanism involved the effects of the close approach of the planet Venus (Mountain Building and Drifting Continents). Although their mechanisms or parts of their ideas were incorrect, it was important that geoscience probed the idea that the continents were not stationary, isolated entities. 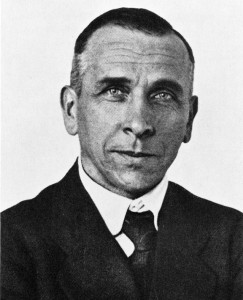