As more evidence unfolded, support that the continents were mobile grew. Seismology is the study of earthquakes and propagating elastic waves below Earth’s surface. Irishman Robert Mallet introduced the foundation for instrumental seismology in the 1850’s by measuring waves produced by explosives (Seismology). In 1897, Emil Wiechert calculated that the Earth had a mantle comprised of silicates and a core made of iron (Seismology). Arthur Holmes used this knowledge to publish a work in 1919 to propose a mechanism for Wegener’s continental drift (Mathez, 1). Holmes believed that radioactive decay heated the earth’s mantle, which caused it to rise; and then as molten rock cooled and became denser, it sank back deeper into the mantle (Mathez, 1). This rise and fall of magma produces convection currents, which Holmes believed to have dragged the continents on the surface along with them (Mathez, 1). Although this is not entirely correct, mantle convection does play a large role in the modern day understanding of plate tectonics.  In 1960, geologist Harold Hess proposed the accepted theory today of sea-floor spreading (Vine-Matthews-Morely Hypothesis). His hypothesis was published in 1962 in his work entitled “History of Ocean Basins” (Vine-Matthews-Morely Hypothesis). Hess stated that seafloor is produced at mid-ocean ridges and is generated by convection currents in the mantle (Vine-Matthews-Morely Hypothesis).

Since the beginning of the 19th century, geoscientists have had the ability to measure the alignment of ferromagnetic minerals in volcanic rocks with respect to the magnetic field of the Earth (Geomagnetic Reversal). Data was collected since the 1800’s regarding the location of the magnetic poles. It was evident that their locations changed over time; however, fixists argued this was due to changes in the polarity of the earth and not because of the movement of the continents.

Geomagnetic stripes of the ocean floor

In addition to magnetics of the continental lithosphere, ferromagnetic minerals of the oceanic lithosphere were used to show that continents are mobile. In oceanic lithosphere, it was observed that although in some areas the magnetized crystals frozen in the rock agreed with today’s current polarity, in other areas it was reversed (Geomagnetic Reversal). In 1958, Henry Menard noted that the majority of mid-ocean ridges lied around the center of most oceans (Henry William Menard). He mapped the ridges by using echo sounders (History of Oceanography). He also noticed that the ridges topographically resembled continental rift zones. (History of Oceanography). Geophysicist Frederick Vine and geologist Lawrence Morely independently came to the conclusion that if Harold Hess was correct about sea-floor spreading, then they could prove it by using the magnetized minerals of the ocean floor (Geomagnetic Reversal). They believed that if sea floor was created at a mid-ocean ridge and spread out laterally in both directions parallel to the ridge, then periods of magnetic reversals would display the same pattern on either side of the ridge (Geomagnetic Reversal). Vine and his PhD advisor of Cambridge University, Drummond Matthews, were the first to publish this hypothesis in 1963 (Geomagnetic Reversal). However, it is known as the Vine-Matthews-Morely hypothesis because Morely had been trying to publish it at the same time (Geomagnetic Reversal). This hypothesis is recognized today as the first true test of sea-floor spreading, continental drift, and plate tectonics (Geomagnetic Reversal). 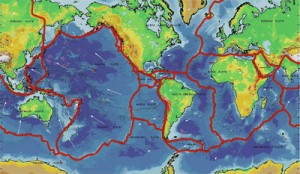 If new lithosphere is being created at mid-ocean ridges, then there must be areas on earth where the lithosphere is destroyed and recycled. In the late 50’s and early 60’s, research was conducted at ocean trenches (Plate Tectonics). Seismic imaging was used to show that oceanic lithosphere could subduct into the mantle (Plate Tectonics). This provided a mechanism to counteract extending ocean lithosphere at mid-ocean ridges with shortening around the margins (Plate Tectonics). Between the years 1965 and 1967, various papers were published that helped define and establish the theory of plate tectonics (Plate Tectonics). In 1965, John Tuzo Wilson used the ideas of sea-floor spreading and continental drift to propose his theory of plate tectonics and also introduce the idea of transform faults (History of Oceanography). This key component to the theory explained the last form of fault movement, which then allowed the mobility of “plates” around the globe to function (Plate Tectonics). In 1965 at the Royal Society of London, a symposium was held concerning continental drift and is often understood as the official start in the acceptance of plate tectonics (Plate Tectonics). Wilson published a paper in 1966, which showed previous plate configurations. In this he also introduced what is now known as the “Wilson Cycle,” used to describe the cycle of the creation and separation of supercontinents (Supercontinent Cycle). Various scientists including William Jason Morgan proposed boundaries for tectonic plates; however, in 1967, Xavier Le Pichon published a complete model that included six plates and their respective directions of motion (Supercontinent Cycle). Pichon’s work ended the debate started by Wegener in the early 1900’s, and marked the full acceptance of plate tectonic theory in the scientific community (Supercontinent Cycle).