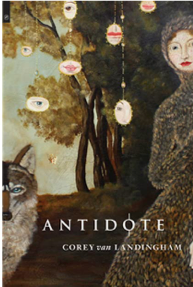 Corey Van Landingham is an Assistant Professor in the Department of English. A nationally acclaimed poet, she is the author of Love Letter to Who Owns the Heavens, forthcoming from Tupelo Press, and Antidote, winner of the 2012 The Ohio State University Press/The Journal Award in Poetry. To learn more about Professor Van Landingham, please visit her website https://www.coreyvanlandingham.com.

Watch Professor Corey Van Landingham read selections from Brigit Pegeen Kelly on our Instagram. She offers her reflections below:

For National Poetry Month, I wanted to pick two poems that are connected to the C-U community. Brigit Pegeen Kelly taught here at UIUC for many years, and is still, it seems, part of the soul of this program, this place. Brigit and her husband, the poet Mike Madonick (mentioned in the poem’s dedication tag), have shaped hundreds of poets here in the prairie. I never met Brigit, but Song was the first book I read during my MFA, and her work has left a deep mark on me—as it has on so many poets of my generation. I can’t go to Allerton without seeing her poems almost materialize amidst the statues. I’ll often wonder, driving through the cornfields, if the rare “hill” I see is one from her poems. Brigit’s poems do that—I might say all great poems do—they make you see the world differently. They change the relationship between language and landscape. They heighten it, and they trouble it.

“Near the Race Track” is from her first book, To the Place of Trumpets. This poem is wildly different from her later work, from the long poems that cascade and build and weave and repeat to create, across many pages, their own mythic worlds. I’ve heard those worlds aren’t so distant, though, that what may seem mythic or surreal or magical is often grounded in something from her very own surroundings, her life. “Near the Race Track” isn’t set here, but, because of Brigit and Mike, I can’t help but associate it with Illinois. There are few poems about joy that I care to return to. Here, it’s the way joy can be a spectacle to behold, but also something that can rise away from us—that’s what makes me come back to this poem again and again. That, and picturing Mike cursing with that umbrella in hand.

It doesn’t feel right to spend too much time here discussing my own work, when in Brigit’s realm. “O-Matoes” revolves around the desire to catch something of joy, though, and originated from getting to know one of our truly joyous neighbors here in Champaign. This poem is, as is probably obvious, for Caleb, who is six.