On October 10, 2014, the Norwegian Nobel Committee announced that the 2014 Nobel Peace Prize will be shared by Kailash Satyarthi and Malala Yousafzay. According to a press release from the Nobel Committee, this year’s winners were chosen on the basis of their advocacy for children and access to education. The Committee states:

It is a prerequisite for peaceful global development that the rights of children and young people be respected. In conflict-ridden areas in particular, the violation of children leads to the continuation of violence from generation to generation. [I] 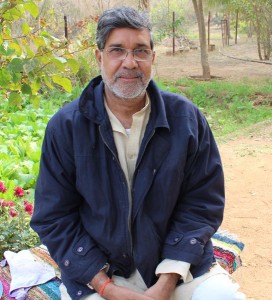 Kailash Satyarthi by Leandro Uchoas is licensed under CC-BY-4.0 (image via Wikimedia Commons).

Satyarthi and Yousafzay share a commitment to children’s rights. Kailash Satyarthi, who was born in Vidisha, India in 1954, has been organizing protests and demonstrations in support of children’s rights for many years. In 1980, he founded the South Asian Coalition on Child Servitude (SACCS), an organization dedicated to aiding child laborers and preventing the trafficking and exploitation of young people. [II] In 1998, he organized the Global March Against Child Labor, during which demonstrators marched across 103 countries demanding children’s rights. Today, Satyarthi chairs the Global March Against Child Labor, an organization that brings together NGOs working on these issues and continues to hold events and advocate for children in the United Nations. [III] If you are interested in learning more, Glocal Notes suggests Globalisation, development, and child rights (Delhi: Shipra, 2006), edited by Satyarthi and Bupinder Zutshi. 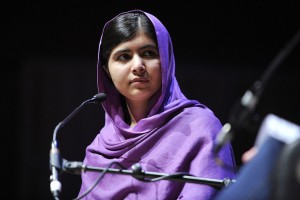 Malala Yousafzai by Southbank Centre is licensed under CC-BY-2.0. (Photo via Flickr.com).

Malala Yousafzay, born in Mingora, Pakistan in 1997, is being honored by the Nobel Committee at just 17 years old. She has been speaking out about girls’ rights to education since she was 12 years old. In 2009, she began to write an anonymous blog for the BBC documenting her experiences living in Pakistan’s Swat Valley as the Taliban came to power in the region and began to limit girl’s access to schools. In 2012, Yousafzay, then 14 and on her way to school, was shot by the Taliban, who hoped to silence her. [IV] Although, the shooting left her in critical condition, Yousafzay recovered and continues to advocate for children’s rights. In July 2013, she gave a powerful speech at the United Nations Youth Assembly. During the speech, she encourages us all to follow her lead by telling us:

One child, one teacher, one pen and one book can change the world.

If you would like to learn more about Yousafzay, her autobiography, I am Malala: the girl who stood up for education and was shot by the Taliban, is available in the library. Both Yousafzay and Satyarthi’s work in support of children’s rights is very inspiring and Glocal Notes congratulates them on their well-deserved Nobel Peace Prize!