Today was by far the best day of the trip so far. Our team arrived at the Nakivale Refugee Settlement around 10am and met with Janet Asiimwe, the Field Program Coordinator of Humanitarian Initiative Just Relief Aid (HIJRA). She was very welcoming and was pleased with the idea of a partnership with us. She explained how HIJRA provides aid in Somalia, Kenya and Uganda. Much of their work includes providing legal services to refugees and others who do not have access to such representation. The HIJRA helps individuals who are know as PSN’s: Person with Specific Needs. These include orphans, women at risk, the elderly, the disabled, and many more. Janet also explained how the HIJRA provides incoming refugees with hygiene kits to help with their sanitation and health. As Janet was speaking to us, a visitors book was passed around that all 16 students, 4 TA’s and Professor Mariñas signed. I was eager to sign the book and leave a remark about how grateful we were to be there. I think it would be really cool to return one day to the Nakivale Settlement and see my name in the book from my time in college. Professor Mariñas and Peter (our outstanding Ugandan contact who we are working with) then explained what our team was doing in the settlement and the purpose of our work. Janet was very receptive and hopeful for a lasting partnership with us. She understood that the impacts of the environment affect the protection of the refugees, so our work will help their work.

After our meeting with HIJRA, we went to visit a primary school within the refugee settlement. When our four vans pulled into the compound, children ran from the buildings smiling and waving at us! They were so excited, and if we simply made eye contact with them and waved they would melt with joy. I got out of the vehicle and immediately was swarmed by kids. They were all reaching to grab my hands and saying “How are you?”, as this is what they are taught us our greeting. Although English is taught in schools, the children were young and their English vocabulary was limited. Teachers were approaching and swatting the kids away with a soft branch and told them all to return to their classroom buildings. But there were only about 10 teachers and (not exaggerating) THREE THOUSAND STUDENTS. So their attempts were futile. I, however, did not mind. When the initial crowd was shooed away, I started walking towards the building our team would be meeting at. I didn’t get four steps before a child ran straight into me with a bodyslam hug around my waist with a “How are you?!” Then two more. I slowly walked as more and more students snuck around their teachers, smiling wildly, to come give me a hug and run back away. As more and more children ran up to greet me and hold my hand and hug me as tightly as they could I was overcome with emotion. There was so much love surrounding me that I started to tear up. I knew they wouldn’t understand why I was crying, so I tried to hold it in. Thankfully a teacher came to shoo away the current crowd of kiddos so I could escape and wipe my face. Professor Mariñas and the TA’s had a meeting with the headmaster while the rest of the team waited outside. Kids were sneaking peaks out of classroom windows at us and giggling. I saw kids ranging from 3 up to around 15 years old.

Eventually the teachers gathered  all the students in the courtyard for our water and sanitation demonstration. And let me tell you, that did not go so hot. The entire school was in the courtyard so the student to teacher ratio was probably somewhere around 75:1. So corralling these super hyper, super excited children was not happening. I saw pushing, and slapping and crying children all just trying to move closer and closer to us. Because we were in broad daylight, our blacklights were not working for our demonstrations to show bacteria and the roar of the crowd meant they couldn’t really hear us anyway. After very strong attempts to make the demonstrations work, we decided to just call it and spread out so that the waves of kids stepping on each other would disperse too. As I threw myself out of the circle we had inadvertently created and into open space, about a dozen kids followed. This was good though because the chaotic crowd was dispersing to follow individual team members around. The kids continued to ask me “How are you?!” And shaking my hand. And when I asked them back, they responded “I’m fine.”  Every single one of them. It was clear they were taught this as the English greeting and response. I asked a lot of them what their names were and I would slowly respond back “My name is Sara, it’s great to meet you!” To which they would bashfully giggle and run away with their friends only to come back a minute later to ask me again how I was. I loved talking to the children and giving them a reason to be excited, simply by giving them a little bit of attention.

Our team then went into a classroom to repeat the water and sanitation lesson to a smaller and more controlled audience. This one went well! Gabi asked the students questions about water and they responded correctly most of the time. After doing a few demonstrations, we handed out sunglasses to those who answered our questions. Once this was done, it was time to leave. We had to cross the courtyard again, which took me about 15 minutes because I couldn’t help but talk and hold hands with the children. By the time I got to the van, they were waving us goodbye and saying “I love you so much”. It melted my heart.

We had lunch at the Nakivale offices for the third and last day in the settlement. After lunch we had a team discussion with Peter about any lasting questions we had about the settlement and our upcoming design projects. Peter gave us very good insight on how best to design a technology or system that could succeed in the settlement and beyond. He expressed his gratitude for our team’s assistance and presence in Uganda. It was a open and motivating discussion.

We left the offices around 2pm to visit the Nakivale Secondary School in the more rural part of the settlement. Secondary schools host students aged 14-18. Many of the schools in Uganda are boarding schools, including this one. Gabi, Peter, Professor Mariñas, Amanda, Ashley and I met with the headmaster of the school in his office. He was very aware of the water issues that the school faces and discussed them openly with us. The school has one 10,000L tank that is filled every night around 10pm. Then water is available in the morning for the students, but there is never enough. We further discussed the challenges that the secondary school faces and took notes. After this meeting, our team split up with half of us teaching the water and sanitation lesson to a classroom and the other testing the schools water. Turns out we collected water from the primary school to test later in the lab, but I was too busy with the kids to notice. I went with the water testing group. Because the students here were older and calmer, we did a full test on site. Erwin and I used the calorimeter to test the Ammonia and Bromine concentrations while Abby and Amanda rested the total and free chlorine concentrations. A couple other team members used the probes to test the water’s pH, Nitrate concentration, dissolved oxygen and conductivity. As we were doing our tests, students were arriving at the tap to fill their Jerry Cans.  Because they were older, they knew more English and we talked with them about the water. They said the quality was fine, it’s just that it runs out. Our conversation slowly shifted into more casual topics about each other’s homelands. They asked us about the differences between Africa and America. I met this really sweet girl named Emily. I told her that my sisters name is Emily, and she liked that a lot. We started taking pictures with my phone and a few girls asked for a selfie with me. It was fun chatting with them and showing them the photos. Erwin ran to the car and grabbed the Polaroid camera. We took the first picture and showed them how it develops if kept in the dark for a minute. They LOVED it. I don’t know if they have ever had a photograph of themselves before. After that the students were asking for pictures with us left and right. They were so delighted to have a keepsake from our visit. This school visit was just as rewarding as the primary school energy. But because we were closer in age and could speak the same language, the time spent together felt more sincere. It really sucked when we ran out of film and many students didn’t get photographs. But like most of this experience, I had to focus on the happiness we brought, and not on all the sadness that’s still there.

We left that day knowing it was our last at the refugee settlement and in the field. It was bittersweet. We drove the 1.5 hour trek back to our hotel where we showered and ate dinner. After dinner we worked in our makeshift lab in the hotel’s boardroom. Here we did further tests on the water that should be more accurate and also that can test for different things than in the field. We finished up our work around 10:30pm and went to bed. We’d be getting up early the next day. 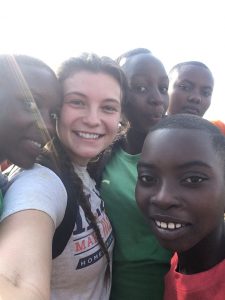