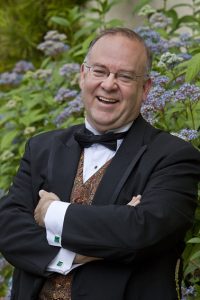 Andrew Megill is Professor of Conducting and Director of Choral Activities at the University of Illinois (Urbana-Champaign) and the conductor of three of North America’s finest professional vocal ensembles:  the Montreal Symphony Orchestra Chorus, the Carmel Bach Festival Chorale, and Fuma Sacra. His performances have been praised for their “power, subtlety, and nuance” and “profound spirituality” [Le Devoir, Montreal] and have been described as “piercing the heart like a frozen knife” [Monterey Herald] and “leaving the audience gasping in amazement” [Classical NJ].  At the University of Illinois, he leads the oldest doctoral program in choral conducting in the United States.

Dr. Megill is particularly admired for his performances of Baroque choral works.  He regularly collaborates with leaders in the field of historically-informed performance, including Masaaki Suzuki, Ton Koopman, Bruno Weil, Paul Goodwin, Julianne Baird, Elizabeth Wallfisch, Nancy Wilson, Peter Hanson, and John Holloway.  He has conducted many period-instrument orchestras, including Piffaro, Rebel, Sinfonia NYC, Brandywine Baroque, the Sebastians, Tempesta di Mare, and the Trinity Baroque Orchestra.  He has conducted and taught at Bach festivals at Westminster Choir College and the University of Missouri-Kansas City, as well as in Dublin, Ireland.

Dr. Megill has previously served as Music Director of the Masterwork Chorus and Orchestra (with whom he frequently performed in Carnegie and Avery Fisher Halls) and Chorusmaster for the Spoleto Festival USA (where he led “the finest opera chorus in the world” [Charleston Post and Courier]).  He has been a guest conductor for the Yale Institute of Sacred Music, TENET vocal ensemble, the Juilliard Opera Center, and Emmanuel Music (Boston), and served as interim choirmaster for Trinity Church (Wall Street) in Manhattan. Prior to his appointment at the University of Illinois, he taught at Westminster Choir College for over twenty years.

Andrew Megill is recognized as one the leading choral conductors of his generation, known for his passionate artistry and unusually wide-ranging repertoire, extending from early music to newly composed works. He has conducted regional or world premieres of works by Caleb Burhans, Paul Chihara, Sven-David Sandstrom, Caroline Shaw, Lewis Spratlan, Steven Stucky, Jon Magnussen, Arvo Pärt, and Krzysztof Penderecki, and has collaborated with the Mark Morris Dance Company, folk singer Judy Collins, puppeteer Basil Twist, and filmmaker Ridley Scott.  Recordings of choirs conducted or prepared by him may be heard on the EMI, Canteloupe, Naxos, Albany, and CBC labels.