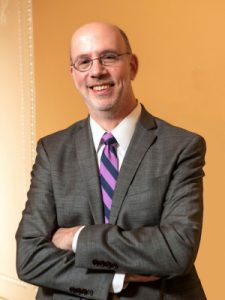 Jeffrey S. Sposato is Professor of Musicology and Director of the School of Music, University of Illinois. His teaching and research interests include music of the baroque, classical, and romantic periods; sacred music; choral music; concert traditions; and opera.

Sposato’s most recent book, Leipzig After Bach: Church and Concert Life in a German City (Oxford, 2018) examines musical life in Leipzig, Germany in the tumultuous century following Johann Sebastian Bach’s death in 1750. As part of his research on the city, Sposato curated historical recreation concerts with the Mercury Orchestra, Bach Society Houston, and Houston Chamber Choir that featured music performed in Leipzig during this period, and he assembled the music for a mass in Leipzig celebrating the 500th anniversary of the Lutheran Reformation. His previous book, The Price of Assimilation: Felix Mendelssohn and the Nineteenth-Century Anti-Semitic Tradition (Oxford, 2006), was named a Choice Outstanding Academic Title for 2006 and a Royal Philharmonic Society Music Award finalist.

Before joining the faculty at the University of Illinois, Sposato served as Associate Director and Director of Graduate Studies at the Moores School of Music, University of Houston, where he taught in the musicology division for twelve years.  Prior to that he taught for six years at the University of Pittsburgh at Greensburg, where he founded and directed that school’s Collegiate Chorale. His grants include an ACLS/Andrew W. Mellon Fellowship for Junior Faculty and a Fulbright fellowship for doctoral research in Germany.