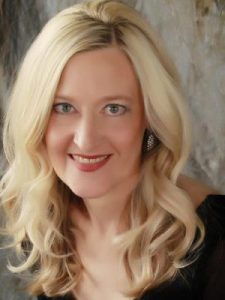 Harpsichordist Charlotte Mattax Moersch has performed worldwide as a soloist and chamber musician. She began piano studies with her mother at the age of four, and became enthralled with the harpsichord while an undergraduate at Yale University, going on to capture First and Third Prizes in the International Harpsichord Competitions in Paris, France and Bruges, Belgium. Called a “nonpareil harpsichordist” by Early Music America, she has received critical acclaim for her playing, at once “dashing yet intelligent” (Classical Times, London), and “fluent and expressive” (Fanfare Magazine).

She has appeared in solo recitals in New York, London, Edinburgh, Rome, Geneva, Paris, and Amsterdam, and at historic venues, among them Carnegie Hall, the Royal Albert Hall, the Mozarteum, and the Palazzo della Cancelleria. As a guest artist, she has performed at the Festival of the Associazione Musicale Romana, Festival estival, Tage alter musik Regensburg, and the Bethlehem and Boulder Bach Festivals, and has played with San Francisco’s American Baroque and the Orpheus Chamber Orchestra, with whom she toured Europe.

As harpsichordist with the New Jersey Symphony, she collaborated with jazz vocalist Bobby McFerrin in a concert at the PNC Bank Arts Center, a 17,000-seat amphitheater, and played harpsichord in Grande Bande’s production of Rameau’s opera Platée at the Brooklyn Academy of Music, featuring renowned soprano Renée Fleming.

She has partnered with dancers as well, performing a program of French music with Baroque dancer Catherine Turocy of the New York Baroque Dance Company, and J.S. Bach’s harpsichord concerti with Paul Taylor’s “Taylor 2 Dance Company.”

The recipient of several important awards and prizes, she was honored with a Solo Recitalist Grant from the National Endowment for the Arts and a Harriet Hale Woolley Scholarship for study in Paris. She is a specialist in seventeenth-century French music; her book, Accompaniment on Theorbo and Harpsichord: Denis Delair’s Traité of 1690, is published by Indiana University Press. Her solo harpsichord discography includes J.S. Bach’s Goldberg Variations, W.F. Bach’s sonatas, and the complete Pièces de clavecin of Jean Henry D’Anglebert, Armand-Louis Couperin, Charles Noblet, and Pierre Février. “The Bach Legacy,” her most recent recording, features sonatas and polonaises of C.P.E., J.C.F., and W.F. Bach.

Currently Professor of Harpsichord and Musicology at the University of Illinois, she directs the period instrument ensemble, Concerto Urbano, which she founded in 1998. At Illinois’ Krannert Center, she has directed fully staged period performances of Baroque operas, including Rameau’s Zéphyre, Purcell’s Fairy Queen, Monteverdi’s Poppea, Lully’s Armide, Handel’s Acis and Galatea, and Cavalli’s La Calisto.