Two weeks ago, our class was introduced to Fusion 360, a modeling software free to download for students. A speaker came in to walk us through a tutorial of making a lamp. Glancing at the lamp on the projector, I did not think modeling it would be very difficult. I was very wrong. Not being very adept at technology, I experienced great difficulty going through the basic functions to make the lamp which I later attributed to my lack of knowledge about the basic commands of Fusion 360. Therefore, I would highly recommend that anyone looking to take advantage of this software watch a few tutorials on the basic functions of Fusion. All in all, I did not end up with a lamp…

Before last week’s class, we were assigned to model an object based on a youtube tutorial. This provided me with the opportunity to learn at a more slower pace how to actually work Fusion. Even though I kept stopping and restarting the tutorial, my headphones came out very…interesting.  Although they look normal, I could not figure out how to do a normal bridge between the two earbuds, so my headphones ended up with an awkward indentation. I’m working on it. 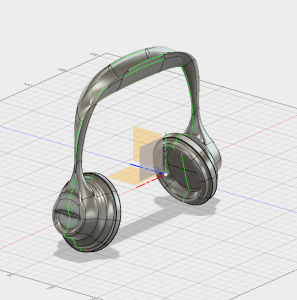 At this point, I have come to terms with the face that I will not be an immediate pro at Fusion. If you have many issues with basic technology, then Fusion 360 is a long learning experience. For this reason, I was very grateful when we were given the opportunity to tinker around with Fusion during last week’s class. Our mission was to fully model and print something during the three hour time. However, being very picky, I think I spent the whole three hours figuring out what to model. Coming to terms with my lack of ability with Fusion, I settled on modeling a handle-less panda mug (the handle was too complicated.) 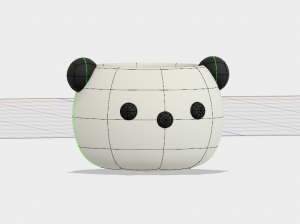 During my own free time, I have taken on the challenge of modeling a snitch from Harry Potter. It has proved to be very time consuming, and I only have the sphere and part of one wing complete. I have not yet finished adding pegs and cutting into them to make the wing more wing-shaped, but here is an update of where I am at. 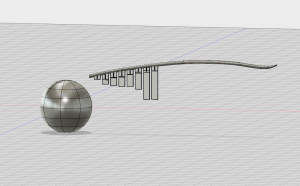 Although my skills at Fusion are not yet sufficient enough to make anything worthwhile, learning Fusion has made me realize the full potential of 3D printing. It is completely limitless and as time goes on and as we become more acquainted with modeling softwares, we will start to see more and more incredible things being created.