It rhymes, I know. One of my first conversations in the MakerLab was with a Mechanical Engineering senior who gave me the “lowdown” on the recent hype around 3D Printing. He explained that the printing technology itself has been around since the 1980s, but that the ability to create or modify complex objects digitally to for printers to create was lacking, although that is no more the case, which is why 3D Printing has a lot more potential now, leading firms to invest in both advanced printers as well as powerful modeling software. When I signed up for the DMS, my biggest expectation was to pick up object modeling skills. Enter Autodesk with Fusion 360.

Fusion 360 is a complicated yet powerful tool. My MacBook’s RAM usage increases by over 40% when I open it, and I use a fairly powerful computer, so be sure to close all open apps or restart your computer before you run Fusion 360 if you aren’t using a spec-monster. Not having instruction and guidance to work with it can frustrate anyone easily to the point of giving up in under an hour, mostly due to the infinite number of options to pick from. Quick confession, I did not know the meaning of ‘Chamfer’ until week five’s session. While having an Autodesk representative explain the basics was the highlight of the past two sessions, the other time spent ‘learning through making’ has been nothing short of awesome. I came across many examples how people went about making their initial table lamps, so I am going to skip that, but here are two ‘spin-offs’ that I came up with.

This teeny tiny object is something I stole from ‘Inception’. Anyone remember the spinning totem that DiCaprio holds on to in order to remember if he is in the real world or not? 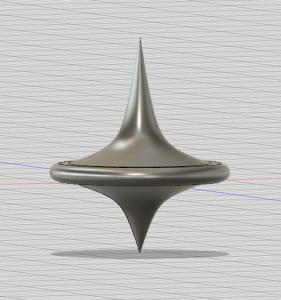 I made this using the ‘Conic-arc’ feature in Fusion 360, after much experimentation with regular arcs, sculpts and what not. It is amazing how much you can learn by making even the smallest of objects. I still haven’t been able to figure out how to make the pointed ends a little blunt, so if anyone has advice on that, please post up! I am also in the process of making a fully function water-gun, which I hope to finish before the semester, here is a rough outer body sketch: 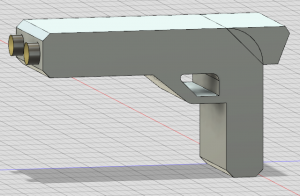 That’s all for now. Until next week.