Coping with Viewing Myself in 3D

This past week, our class had the privilege of digitally scanning our upper torsos to create OBJ & STL files that could be edited in softwares like Tinkercad and Fusion. The digital scanners captured our profiles with an incredible amount of precision; I was astounded by just how accurately the scanners captured us. Learning how this occurred and how the scanners aggregated the millions of points in space to create thousands of surfaces that eventually round out to shape the desired object was remarkable and frankly mathematically intriguing. Thinking of how a plane is formed and the parametrization that can form it provoked me to think about how exactly these surfaces are forming; are these points creating a multitude of vectors that help to create a plane? After my OBJ file was generated, I spent a great deal of time simply playing around with the file in MakerBot and marveling at the accuracy by which I was recreated on a computer. 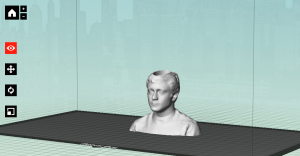 As I continue to to develop more ideas for objects and things to make, using digital scanners will definitely become a routine part of my making process. Letting ideas grow off an object that already exists will be a great way to create not only practical things, but also to get an idea of how different dimensions look in softwares like MakerBot and Fusion. I’m still learning how to get a relative idea of size and how computer design can translate into something tangible that’s printed. I’m very excited to be able to scan other objects, because this also enables you to create AROUND them, which can lead to the development of useful accessories and companion items.

Precision and Complexity in the Future

The fact that a digital scanner was able to accurately produce a 3D file of myself really gave me a solid understanding of just exactly our professor meant on the first day when he continued to reiterate that complexity was not a concern for 3D printing. The 3D printer’s ability to produce objects with intricate structures and unique frameworks gives another reason for manufacturers to adopt additive manufacturing as a process. The product possibilities are infinitely expanded by being able to create something positively (adding material) as opposed to negatively (removing material). I am positive that as additive manufacturing begins to scale and become more of an influential force with suppliers, companies will begin to capture segments of markets in ways that were previously not feasible. Customization and personalization, a growing need for consumers, is at the crux of the maker movement in the realm of enterprise and will continue to be a huge selling point for why manufacturers should adopt additive practices.