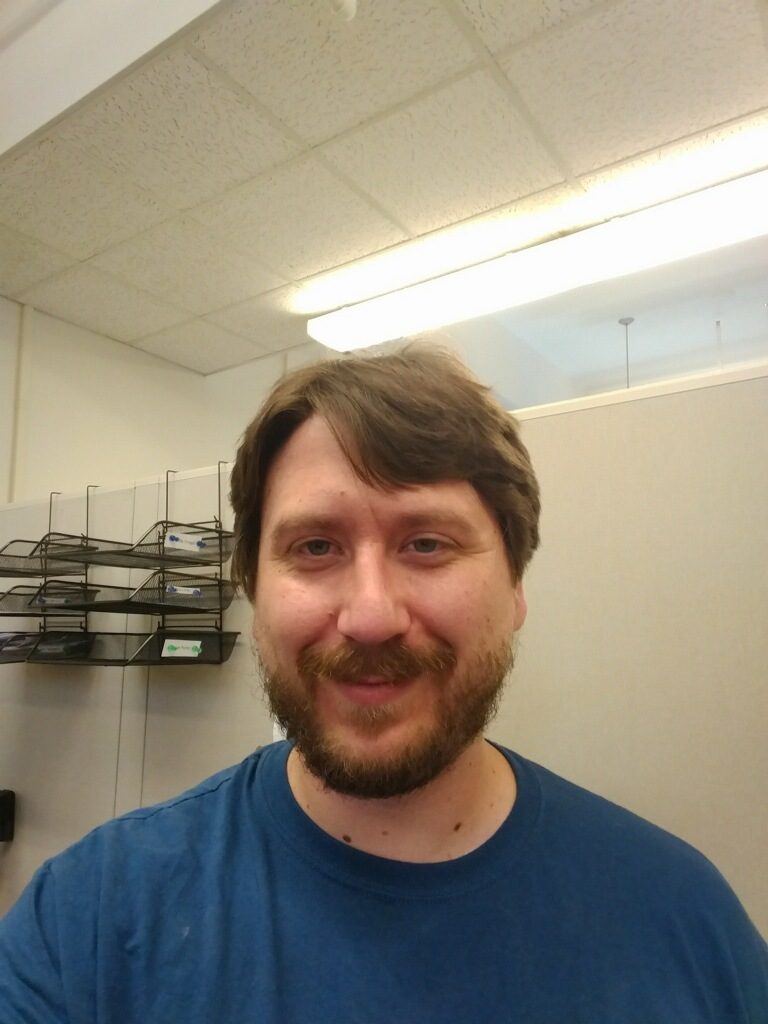 I started out in community college, and got my BA at Salisbury University on the Eastern Shore of Maryland, majoring in Philosophy. After that, I received an MA in Philosophy from Louisiana State University. I did a year in AmeriCorps working for Hospitality Homes, a wonderful not-for-profit in Boston that provides free volunteer host housing for people who travel to Boston for medical care. I spent another year in Boston working at Eureka!, a puzzle and game store, which was an enormous amount of fun. I came to the University of Illinois in 2012 to enter the PhD program in Philosophy.

I’d say that I didn’t really have a choice; I was never all that good at anything else, and I was always quite good at philosophy. Neither of my parents were surprised with where I ended up. I love reading and teaching philosophy and just never really get tired of it.

My project has to do with what conspiracy theories are and why we find them so compelling. There’s a small literature on what a conspiracy theory is and whether anything is wrong with them in philosophy. In most of the work, however, very little (if any) empirical evidence is given for why a particular definition is settled upon, and little focus is given to what is so compelling about them. In psychological and sociological literature, a definition of “conspiracy theory” is normally imposed without much questioning, though lots of work is done on why people believe them. My hope is to use empirical evidence to support a particular definition of conspiracy theory (or distinguish between different types), so that a more satisfactory account can be given about their epistemic adequacy and psychological appeal. In order to do this, I am working through a comprehensive collection of conspiracy theories with a couple undergraduates and determining what features tend to be present. In addition, I will be analyzing the text using various tools in R in order to uncover other, less obvious features about conspiracy theories in order to work out which are most typical.

I just started, so I haven’t had an opportunity to do a whole lot yet. Working on my project is one of my duties, though, and I’m enjoying that very much!

I’m not sure I have much to say about this. Certainly, I think that philosophers often make unsupported empirical claims in support of their arguments, and instead of waiting for a study to be conducted on the matter, it’s not a bad idea for philosophers to learn about experimental design and pursue the question themselves.

Yikes! I don’t think there’s any hope of picking a single philosophy text. For an example of an endlessly dissatisfied intellect that is always looking for a deeper understanding of various phenomena, it’s hard to outdo Nietzsche, so perhaps his On the Genealogy of Morals.

Want to get in touch with Clay? Send him an email or come visit him at the Scholarly Commons!