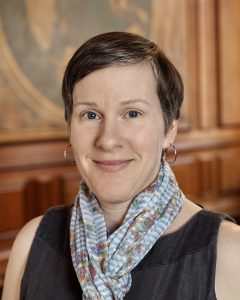 This latest installment of our series of interviews with Scholarly Commons experts and affiliates features Carissa Phillips, Data Discovery and Business Librarian.

I earned a BS in physics and astronomy and an MBA with concentrations in finance and statistics, both from the University of Iowa. After receiving my MBA, I worked for the State of Iowa for 2.5 years in the newly-created position of “performance auditor” within the Office of the Auditor of State. After that, I moved to Chicago and worked for Ernst & Young (now EY). For my first 1.5 years there, I was in a newly-created auditing position within Internal Audit Services; for my last 3.5 years, I was an analyst in the Mergers and Acquisitions Due Diligence group (later renamed Transaction Advisory Services).

I joined GSLIS (now the iSchool) in 2002, and worked as a graduate assistant in the Physics Library (since closed) until I graduated in May 2004. I worked as an academic professional in the Library until 2005, when I was hired as the Business and Finance Information Librarian in the Business and Economics Library (since closed). I earned tenure in 2012, and moved to the Scholarly Commons (SC) that same year. I moved again in 2015, this time to Research and Information Services (RIS), and was the interim unit head for a year. This past January, my title changed to Data Discovery and Business Librarian, and I now split my time between RIS and SC.

Events were converging that made me stop and reassess my career and life direction. I started to think about what I loved to do. There was a common thread of research and investigation running through every job I had ever held, and I realized that was the part I enjoyed most. So I started to look around at professions and careers that would let me develop and formalize my skills in that area, and I stumbled across librarianship. Once I learned that the top-ranked program was in my home state, it was an easy decision.

What is your research agenda, if you have one?

When I was working toward tenure, I studied the approaches students took in gathering information during experiential consulting projects and their perceptions of the research process. Now, as part of my transition into my new role of Data Discovery and Business Librarian, I’m exploring research areas that will inform my activities.

I love working with researchers to help them identify resources from which they can acquire or derive the data they need. My favorite situations are the ones that seem impossible, when it’s so unlikely that anyone ever collected that data… and then I find it.

It really depends on the context, but I love any opportunity to recommend Hathi Trust for social science data. This is one of the best places to hunt for that “impossible” data I mentioned earlier, the data you can’t believe anyone ever collected.

Not sure where to start? Next Tuesday, March 18th, there will be two Savvy Researcher Workshops geared to help guide students through the first steps in the creation of a future financial plan. The two workshops will be held in room 314 on the third floor of the Main Library. The first session will run in the morning from 11:00am-11:50am and the second session will take place in the afternoon from 1:00pm-1:50pm.

The Scholarly Commons and the Student Money Management Center (SMMC) have partnered to create: “Steps Toward Financial Planning.” These workshops will address ways to handle issues such as unburying yourself from undergraduate student loans, securing a brighter financial future after graduate/professional school, and implementing a smart financial plan for your future dreams. The sessions will also cover the ins and outs of necessary financial documents, important questions to ask a financial planner, and how to set realistic future financial goals. Both sessions are free to attend, so you’ll already be taking a step in a fiscally responsible direction.

If you have any questions or require any special accommodations, please contact SMMC at studentmoney@uillinois.edu. To register for one of these sessions, or for more information on this and other Savvy Researcher Workshops, take a look at the schedule. You can also check out the Savvy Researcher’s Twitter account @learnlibrary. We hope to see you there!