May has finally graced us with its presence and it brings wonderful events along with flowers and sunshine just before (and some after, for those of you sticking around) graduation. We’re going to avoid having graduation itself on this list so those of you ignoring its ever-looming presence may be at ease and are instead going to focus on some of the lighter and less real-life-inducing things you can do around town this month. With events ranging from the swansong of a local music staple to the always pleasant opportunity to take in some nature, we hope we’ll find a little something for everyone this month.

For those of you graduating, we wish you the best of luck with your future endeavors and we thank you for sharing some of your time at the U of I with us here at the UGL. Congratulations to the class of 2016! 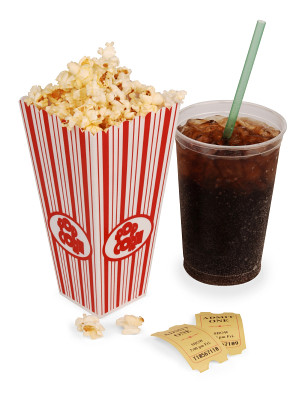 Sometimes it seems like the only way to make it through finals is to watch a laugh-out-loud movie with friends. Lucky for you, the good folks at the Illini Union are going to screen the new How to Be Single movie, starring Dakota Johnson and Rebel Wilson for those of you looking looking to take a break from all that cramming. This funny, smart, not-so-original rom-com may be all you need to get you through this coming week. 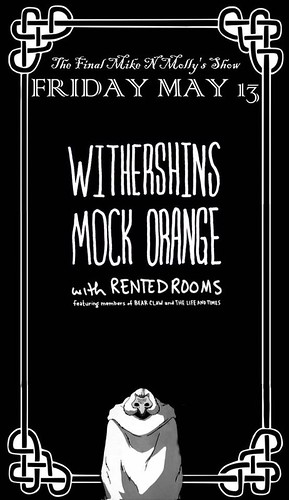 Many of the events blogs we’ve posted in the past have featured glimpses into the deep musical soul of our twin cities and many of those past events have been hosted at one of CU’s finest local music venues: Mike N Molly’s. As the saying goes, “all good things must come to an end” and May 13 will be the final night for locals to bask in the glorious sounds that can be found emanating from the glorious green bar in Downtown Champaign. Local giants Withershins will play the final set ever and while we would advise seeing them anytime they’re playing around town, we think this performance will be even a bit more special. It’s a night that will be remembered for many years to come just like the ceremony happening the days following it. 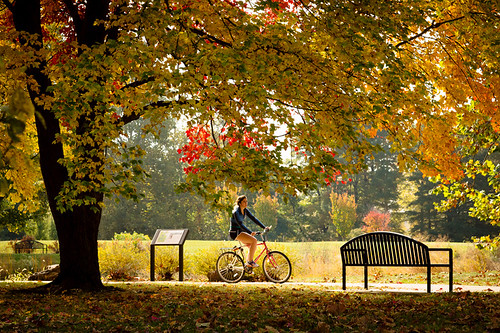 If you’ve never been to the Arboretum over near the intersection of Lincoln and South Florida Avenues, anytime in May would be the perfect time to visit. The Japan House is a serene spot where you can simply sit and watch an afternoon slip on by or if you head toward the back of the Arboretum you’ll find yourself lost in the flowers of the Selection Garden, sure to be in bloom by the end of finals and offering more colors than you can imagine in one place. The Idea Garden is another beautiful spot to spend some time in and overall, we think you’ll find some sense of inner peace when walking around on a sunny day. And after finals, that may be just what you need. 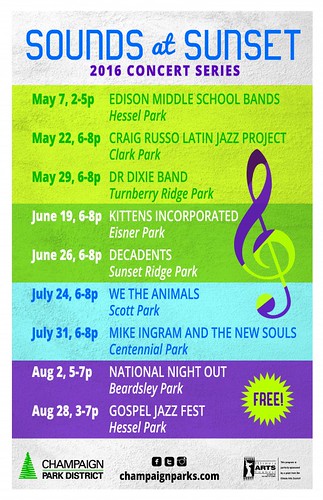 Champaign-Urbana is chock full of lovely parks that are a great place to spend a summer day and the Parks District is looking to bring even more people to them this summer with their Sounds at Sunset Concert Series. May 22 will feature the Craig Russo Latin Jazz Project, a group that is sure to play some lively and intricate tunes that could be the cap to a perfect weekend. The parks department encourages you to bring chairs and refreshments, so put on your weekend shorts and shades and listen to some great music as the sun goes down before another work week. 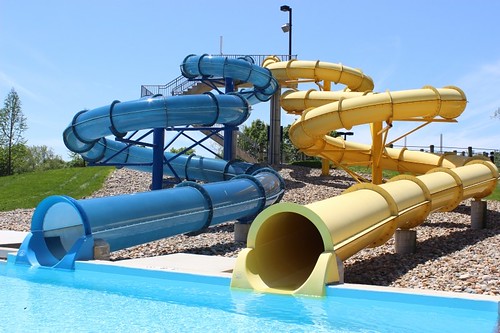 Summer and all its sunshine and warmth will hopefully be in full swing by the end of the month and the best way to cool off is to hit the pool. Sholem Aquatic Center will be celebrating its opening day and for only $9 for admission, you’d be hard pressed to find a better place to beat the heat.

Whether you’re sappy or psyched for commencement this year, we believe in you! No matter how you feel about graduating, we know you’ve got some feelings. We’ve got some materials for you to read and watch to deal with those feelings. 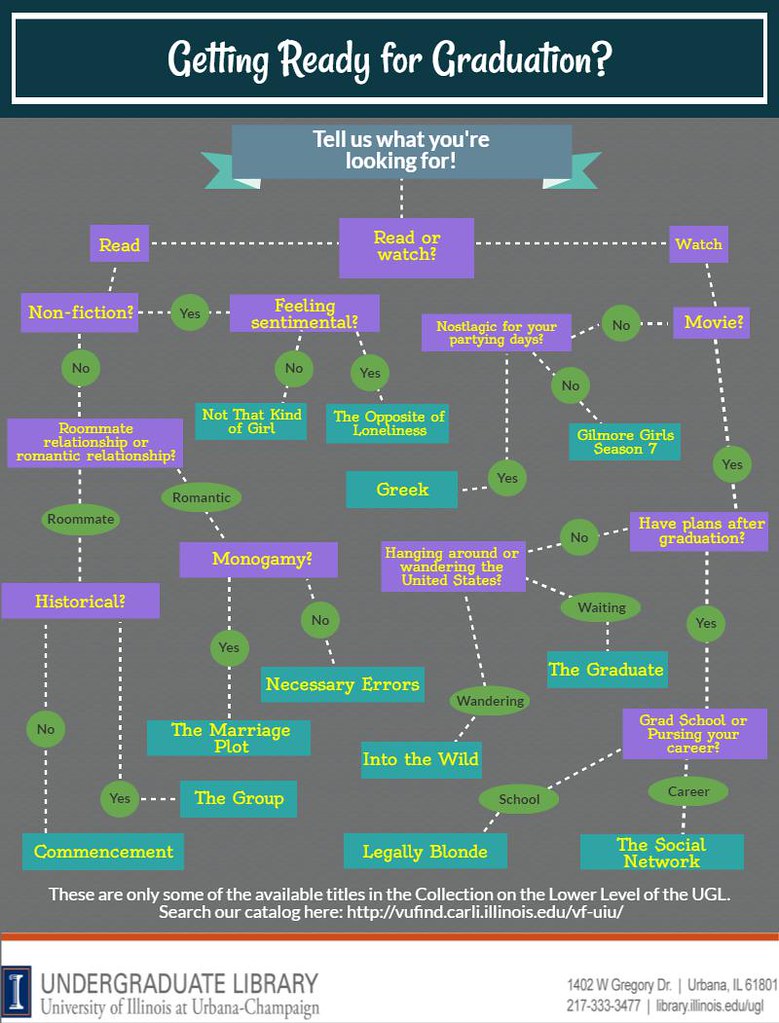 What commencement story should you read or watch next? Check the flowchart to find out!

The Marriage Plot by Jeffrey Eugenides

In this commencement story by Pulitzer Prize winner Jeffrey Eugenides, nothing is easy: Madeleine is unsure of her life goals except for that she loves Leonard, who experiences emotional rollercoasters she is unable to fully grasp. Mitchell, Madeleine’s college friend, pines for her while examining philosophical life questions during his travels abroad. But even for graduates of Brown University in the 1980s, the best laid plots may fail. This novel examines love in an unexpected (and not always happy) way and is not for a reader who loves a perfect ending.

Not That Kind of Girl: A Young Woman Tells You What She’s “Learned” by Lena Dunham

Book: Not That Kind of Girl: A Young Woman Tells You What She’s “Learned” by Lena Dunham

If you ever feel like you’re awkwardly fumbling through life, you are not alone. Lena Dunham’s smash hit Not That Kind of Girl, similar to her tv show Girls, is a silly, but simultaneously gravely serious, memoir of what it feels like to not always know what you are doing. Although Dunham details her life from childhood to a few years after her college graduation, she captures the spirit of many young graduates embarking on their own self-discoveries.

Re-watching all of Gilmore Girls with your roommate during your final semester of college?!? Well, hurry up and get to the last season (even though it suffers because the creator was gone). Rory is starting (and finishing) her last year at Yale, all the while still in a long distance with Logan (obviously the greatest boyfriend she’s ever had), and Lorelai is doing what Lorelai does best…making questionable decisions. Will Lorelai and Luke end up together? Will Rory have the job of her dreams? What were the four words Amy Sherman-Palladino (the show’s creator) wanted to use for the ending of Gilmore Girls? What happens next? Luckily, you will find out! Sherman-Palladino and the rest of the Stars Hollow family are coming back for a series of four 90 minute Netflix episodes, due to be released in the near future. 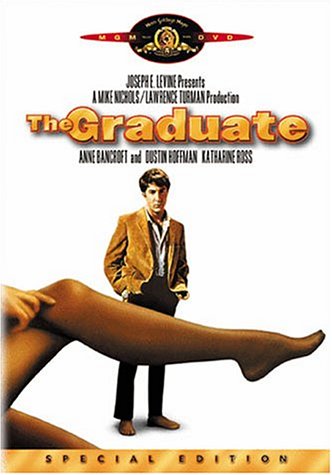 The Graduate – Image from Amazon

In what is regarded as one of the best movies of all time by the American Film Institute, Dustin Hoffman stars as Benjamin Braddock, a recent college graduate, in this 1967 comedy-drama. Braddock has decided to spend the summer after he graduates lounging by the pool, ignoring any suggestion from the adults in his life about what to do after graduation. After engaging in an affair with one of his parent’s friends, Benjamin’s life takes a wild turn. This movie is based off the 1963 novel of the same name, that has also been adapted into a Broadway play. Will Benjamin figure out what he wants to do with his life? Will he get the girl of his dreams? Spend some time and find out, by watching the movie that Champaign native and University of Illinois favorite, Roger Ebert, called “funniest American comedy of [its] year.”

Whether you finished in four years, are celebrating as a super-senior, or transferred in from another school, the UGL extends a big Illini Congrats to all the graduating seniors this weekend! We truly hope #ClubUGL was a positive part of your time here at Illinois, and we’re sure gonna miss seeing your smiling faces (studying is fun, right?) in our underground hangout! If you are graduating, you don’t have to entirely say goodbye to the library, though! We’ve got great resources for graduates! Check out the guide to Using the Library After Graduation and more info on Services for Alumni.

You can also keep up with the latest in UGL happenings by following us on Twitter, liking us on Facebook, or following our boards on Pinterest. (We know you’re gonna be nostalgic for the all-nighters you pulled here. It’s okay to admit it. We get it.)

If you’re not graduating yet, don’t fret! We have plenty of awesome stuff in store for the summer and next school year, too. Keep in touch, come say hello, and stake out your prime study space for next fall! Remember, we’ll be closed this Saturday and Sunday for graduation weekend, but we’ll be back up and running on Monday, May 13 for Summer I hours.

Thank you, seniors, for helping make our work at the library special and important. After all, the library is here to support YOU! Good luck to all the graduates as you embark on your next adventure. And remember, you’ve always got a friend in the UGL!