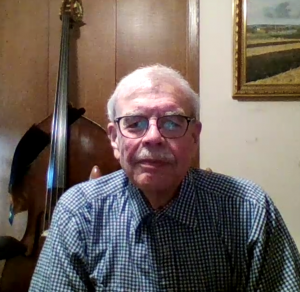 In 1963 he studied string pedagogy with Paul Rolland. He also received a series of double bass lessons with Rolland covering the kinesthetics of performing on the instrument. He later adapted Rolland texts and musical materials for his monograph, Principles of Double Bass Playing. During the 1960s he served on Rolland’s instructional staff at the University of Illinois Summer Youth Music program and as a research assistant on the Illinois String Research Project.

Dr. Fanelli has performed professionally with orchestras throughout the Midwest including the Saint Louis Philharmonic, Gateway Festival Orchestra, Champaign-Urbana Symphony, and Waterloo-Cedar Falls Symphony. In 1964 he was a member of the University of Illinois Symphony Orchestra tour of Latin America for the U.S. State Department cultural exchange program.

He has given numerous presentations on string methods instruction, double bass history, pedagogy and Paul Rolland’s life and career. He has published articles for national and international music organizations and professional journals. He is one of the coauthors of the Suzuki Bass School texts. He served as the double bass ASTA columns editor and is the co-author for the double bass volume of the1997 ASTA String Syllabus.

His dissertation has been cited as a definitive study on Rolland, which is used as a primary source on Paul Rolland internationally. In January 2017 he contributed a Rolland biographical article for the ESTA conference in Stockholm Sweden. In 2013 he authored biographical entries on Paul Rolland for The Grove Dictionary of American Music second edition and The New Grove Dictionary of Music and Musicians online, both published by Oxford University Press. He is currently completing a biography on Rolland’s life and pedagogy to be published in 2021.