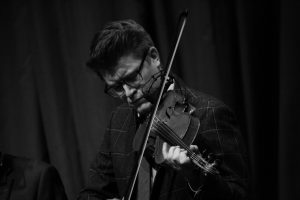 Matt Manweiler has taught orchestra in the Rock Island School district, for 18 years. During his tenure he has created the visiting artist program that has given students the opportunity to study eclectic styles and perform with world-renowned artists including the Turtle Island String Quartet, Christian Howes, Belford Hernandez, Andrew Collins Trio, Ellis Kell, Mark Wood, and Jesus Florido.He studied violin at Butler University under Davis Brooks, Larry Shapiro, and Stanley DeRusha. However, Matt’s journey into eclectic styles began over twenty years ago when he attended his first of many Mark O’Connor fiddle camps. Through that community he had the honor of studying with notable eclectic artists like Darol Anger, Matt Glaser, Tracy Silverman, Rachel Barton-Pine, Casey Driessen, Sara Caswell, and the late Johnny Frigo. Around that time he also ran the Nickel Creek message boards and volunteered with fan outreach and relations for the band.More recently he has toured with the multi-platinum band, Foreigner under the direction of Dave Eggar, and also with Mike Compton from O Brother Where Art Thou. He has soloed with and arranged music for the South Kansas Symphony in Winfield Kansas, and has also worked with with Matt Flinner, David Balakrishnan, Andrew Collins, and John Williams of Star Wars Royalty. Back home in the Quad Cities, he regularly performs with his Americana band Milltown, and the Bucktown Revue.   In addition to his teaching in Rock Island, he is the director of educational programming for Jesus Florido and Latinfiddler Music Productions, and is working with Jesus to provide diverse pedagogy to school orchestras.  He has also presented workshops at the Illinois All-State Conference, the International Paul Roland String Pedagogy Workshop, and has been a guest lecturer with the University of Illinois.