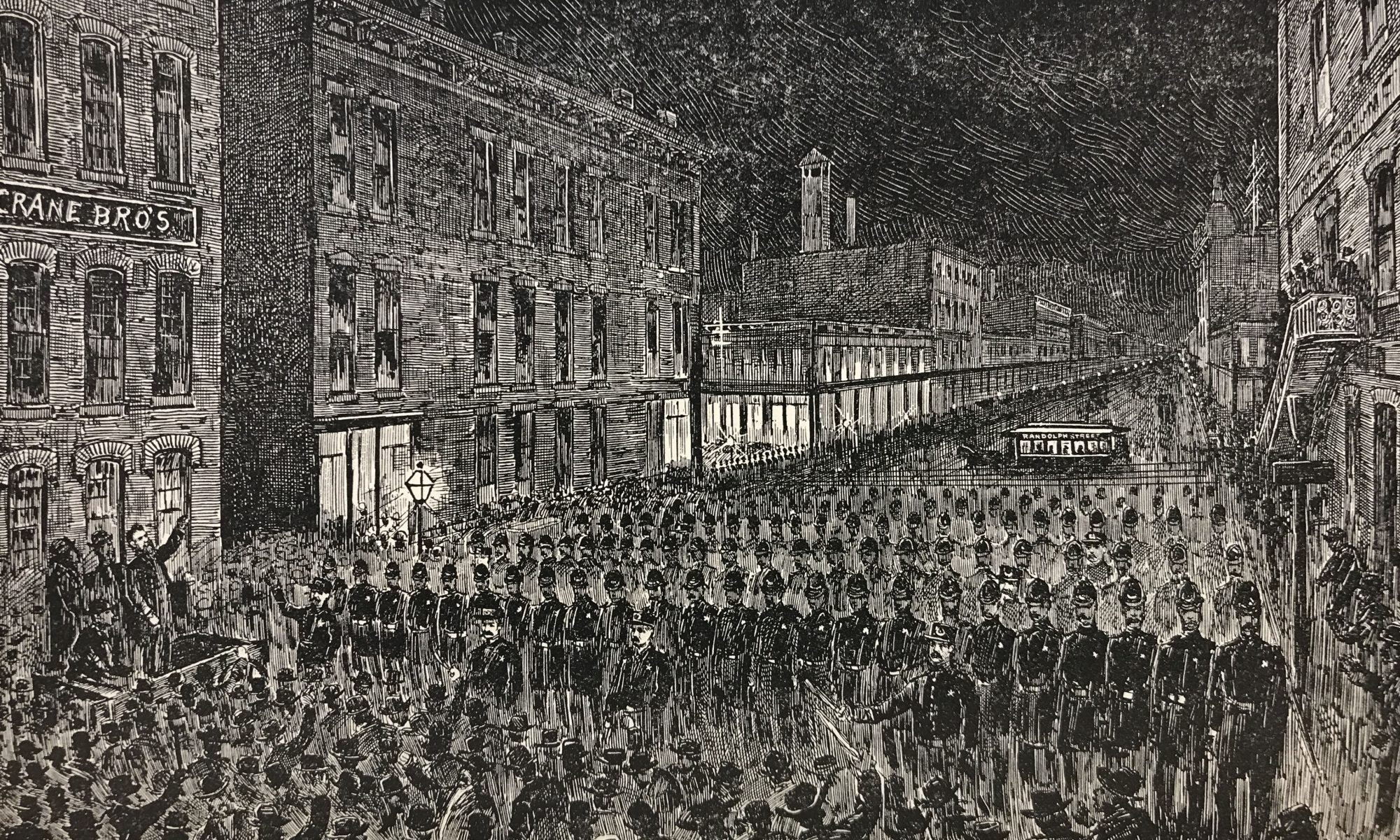 “PREPARE FOR THE STORMY TIMES BEFORE US”: CHICAGO’S HAYMARKET AFFAIR

On Tuesday, May 4, 1886, at 7:30 PM, around 1,500 workers gathered on Desplaines Street in Chicago between Lake and Randolph in an area known as Haymarket Square. They gathered together to protest actions the police had taken the previous day against a strike at the McCormick Harvesting Machine Company that left one man dead and many others injured. Strikes were becoming more common throughout the U.S. during the 1880s as workers began protesting long hours and low wages. Born out of conflict between labor and management, strikes often resulted in hostility as well, since police and activists typically clashed at these events.

The May 4 rally began as a peaceful event, which was confirmed by Chicago Mayor Carter Harrison, who attended the rally as an observer. As the rally began to wind down, the mayor left and the majority of the crowd began to dissipate. At that moment, the police arrived to disperse the remaining attendees. It was then that someone threw a bomb. Chaos ensued, and police and possibly some attendees opened fire. Seven police officers and at least one civilian died as a result of the violence at the rally, and at least sixty others were wounded.

Maps of the Haymarket Square Affair 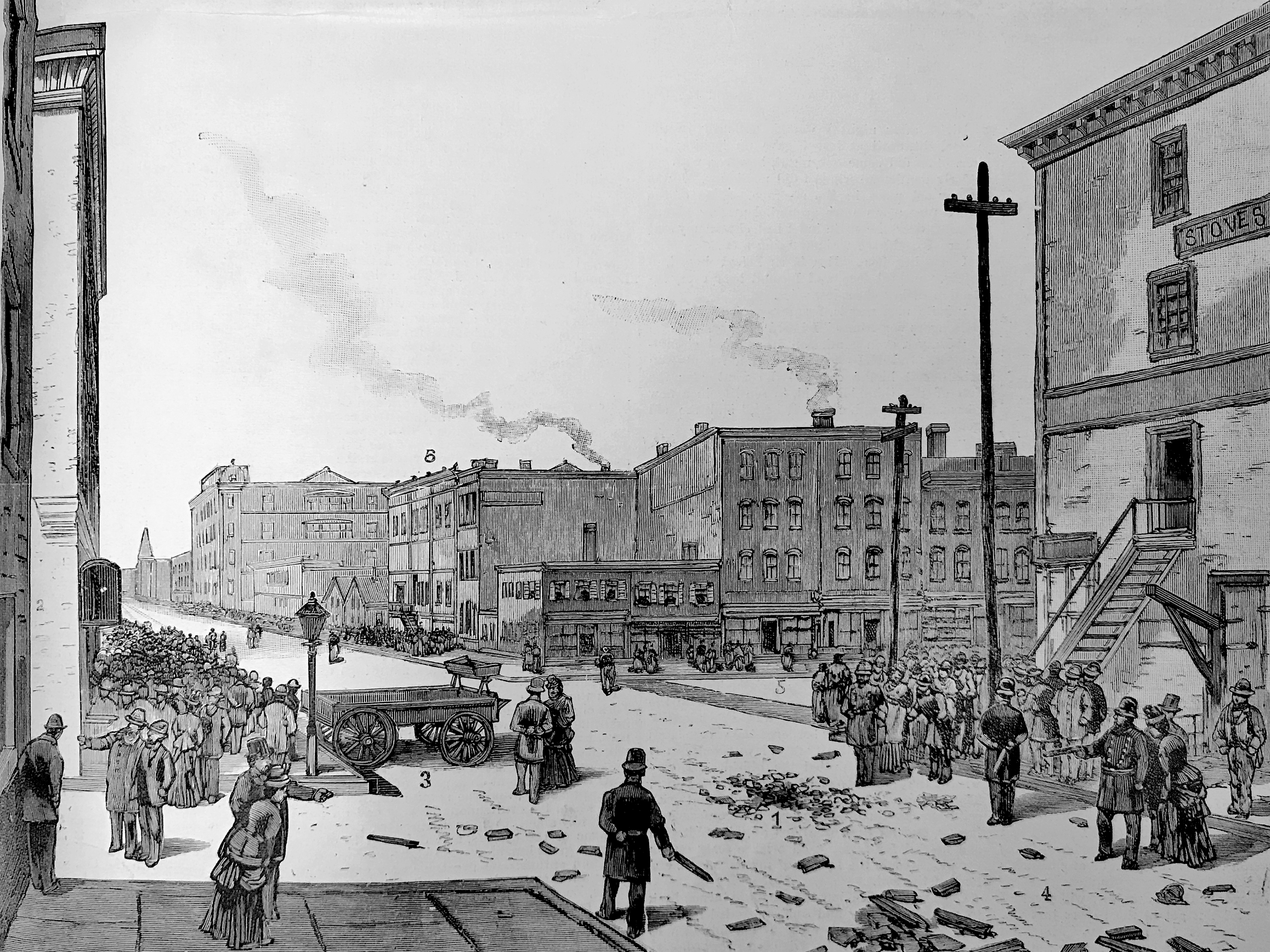 Item 1: Frank Leslie’s Illustrated Newspaper. V. 61-62. May 15, 1886. Rare Book and Manuscript Library at the University of Illinois at Urbana-Champaign Library. 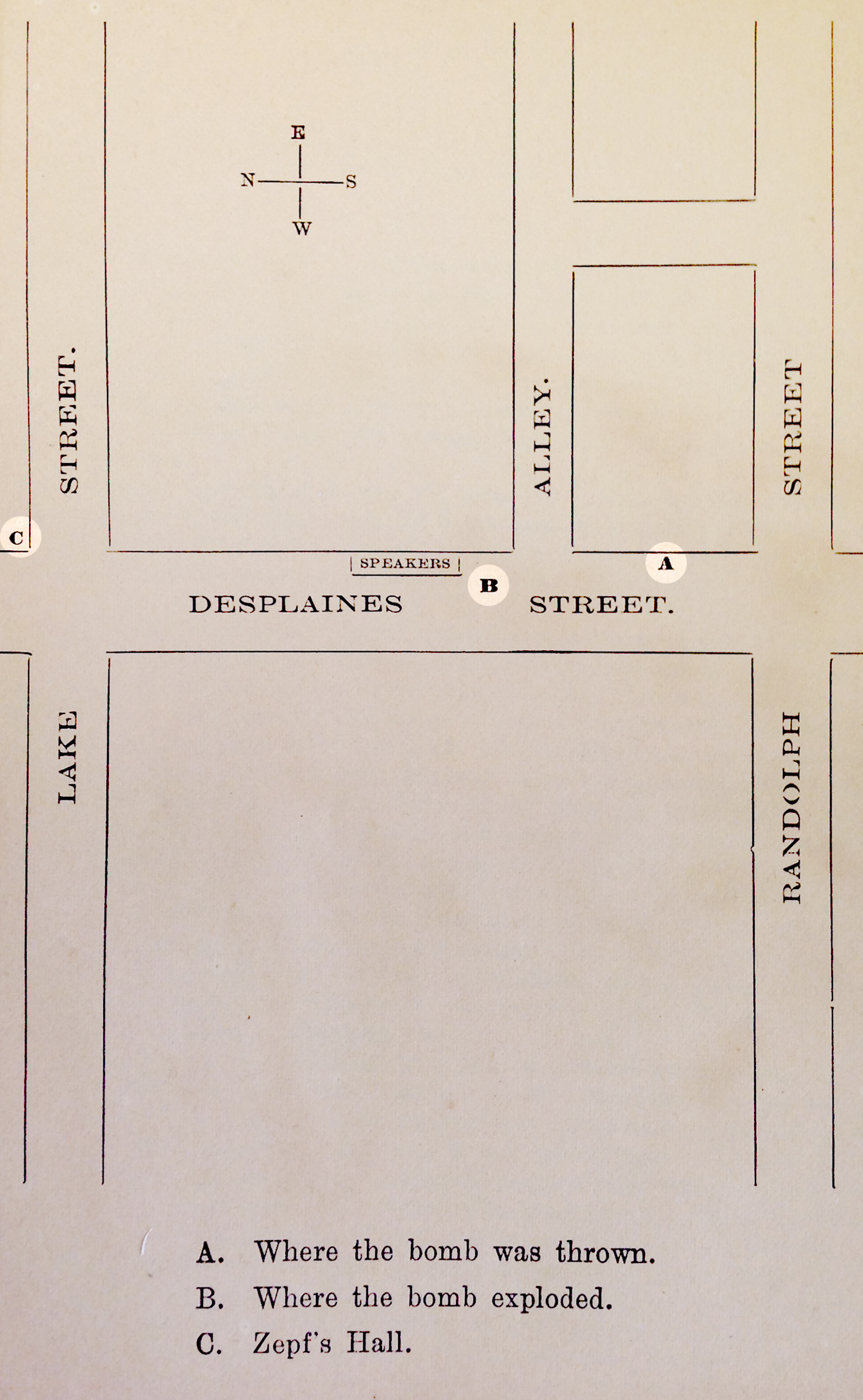 Item 2: Lum, Dyer D. A concise history of the great trial of the Chicago anarchists in 1886. Condensed from the official record. Chicago: Socialist Pub. Society, 1886. Illinois History and Lincoln Collections.

Interested in learning more? Peruse a full electronic copy of A concise history of the great trial of the Chicago anarchists in 1886 by Dyer D. Lum.

Due to the chaos that ensued after the bomb exploded, it was difficult to determine where the bomb was thrown from. Maps depicting the event illustrate inconsistent details and the differences in opinion about where the location of the unknown assailant and the explosion were in relation to the wagon holding the speakers. Some maps place them north of the wagon, others depict them to the south. One fact seems to remain consistent throughout many of the sketches: the bomb exploded close to the wagon and the speakers.

Zepf’s Hall, highlighted in item 2, was a tavern that had become a frequent spot for Chicago’s socialists to gather together. Some sources suggest that this was the agreed upon meeting place for attendees after the rally.

Illustrations of the Haymarket Rally 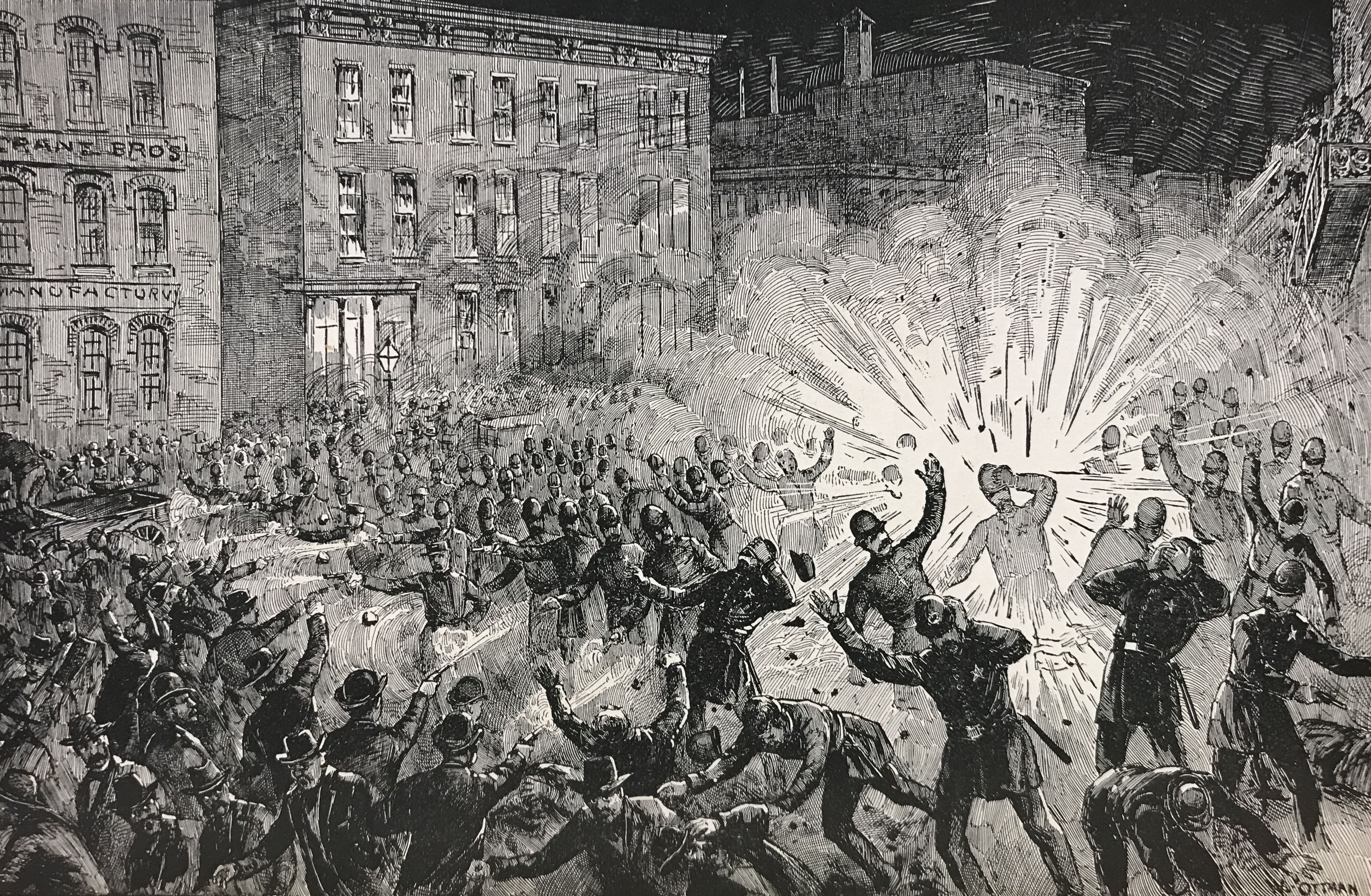 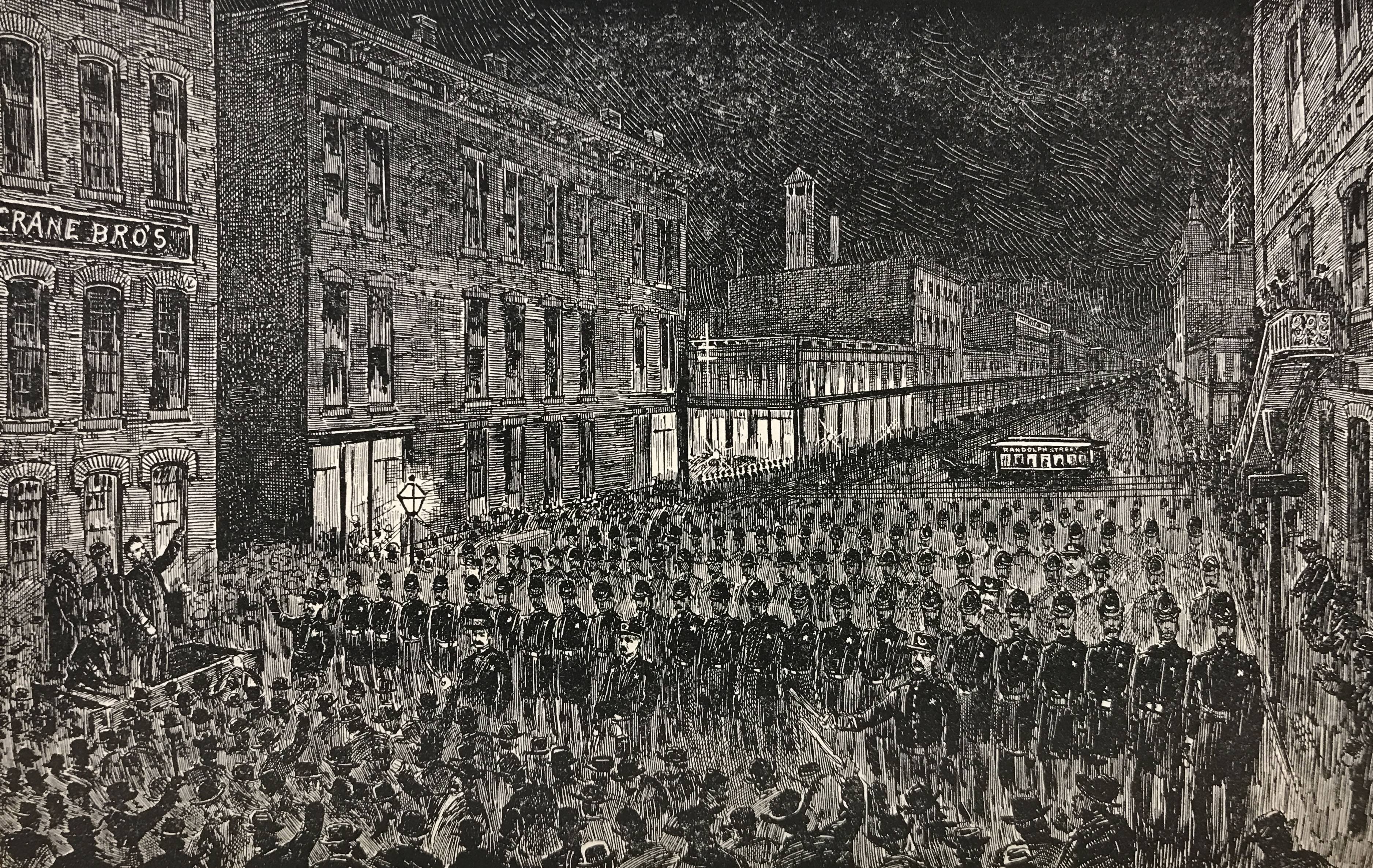 Items 3 and 4: Schaack, Michael J. Anarchy and Anarchists. A history of the Red terror and the social revolution in America and Europe. . . . Chicago: F.J. Schulte & Company: 1889. Illinois History and Lincoln Collections.

Explore this electronic copy of Schaack’s book the discover more images and information about Anarchy and Anarchists.

The details of what happened on the night of May 4 vary depending on which source you consult. Sketches, much like maps of the rally, often contain conflicting renderings of what happened that night, usually influenced by opinions of the police force or the laborers. As an example, the sketches listed above appear in a work written by Michael J. Schaack, who was captain of a Chicago police force division at the time of the Haymarket Affair.

As item 3 depicts, officers arrived at the rally as the last of the speakers were delivering their messages from the bed of the wagon. They marched from the police station down the street to the rally in rows. They ordered the crowd to disperse, even though most of the 1,500 attendees had already left, partially due to the rain that was beginning to fall down on the gathering. In the sketch, it appears that there are still a large number of laborers at the rally, and many in the crowd seem to be hostile towards the officers before them.

Item 4 is a sketch of the moment when the bomb exploded. It depicts both sides opening fire on one another, contradicting other sources that report police officers opening fire only after the bomb had exploded. While multiple sources report police shooting in response to the bomb, it is unclear whether the attendees began shooting at police. This sketch, however, shows the laborers firing upon police as the bomb is exploding, suggesting that this was a premeditated attack on police. 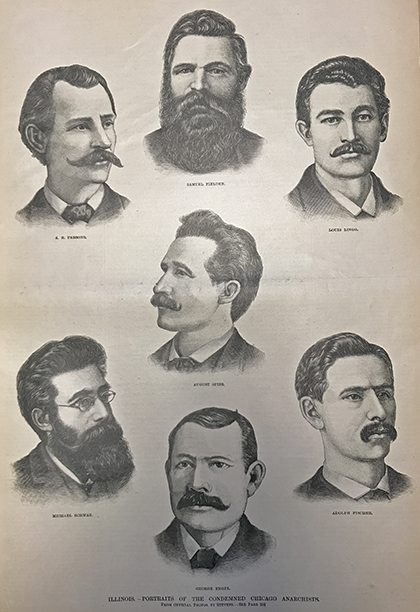 Item 5: Sketch of seven of the eight men arrested in response to the bombing. Frank Leslie’s Illustrated Newspaper. V. 65-66. November 12, 1887. Rare Book and Manuscript Library at the University of Illinois at Urbana-Champaign Library.

Eight men were arrested in the days following the rally on charges of murder in connection with the unknown bomber. Several of the men were not even at the rally that evening and had witnesses to prove they were nowhere near Haymarket Square when the bomb was thrown. The arrests sent shockwaves throughout the country and led to a controversial trial.

What became known as the Haymarket Affair set off a wave of xenophobia and anti-labor sentiments not only in Chicago, but also throughout the rest of the country. Labor organizers, immigrants, and radicals were arrested by police around the U.S. In August of 1886, eight men, known as the “Chicago Eight,” were charged with murder in connection with the bombing. They had become primary suspects due to their political beliefs and pro-labor activities, even though some of those charged had not attended the rally that evening.

The ensuing indictments and trial were controversial. Many believed both the jury and judge were biased, and there was little evidence presented in court that linked the eight men to the bombing. Regardless, on August 20, 1886, the jury found the defendants guilty and Judge Joseph E. Gary sentenced seven of the eight to death. News of the Haymarket Affair and the subsequent court case extended far beyond the city of Chicago. Its impact was felt throughout the world, sparking both positive and negative changes for working classes everywhere.

Haymarket in the News 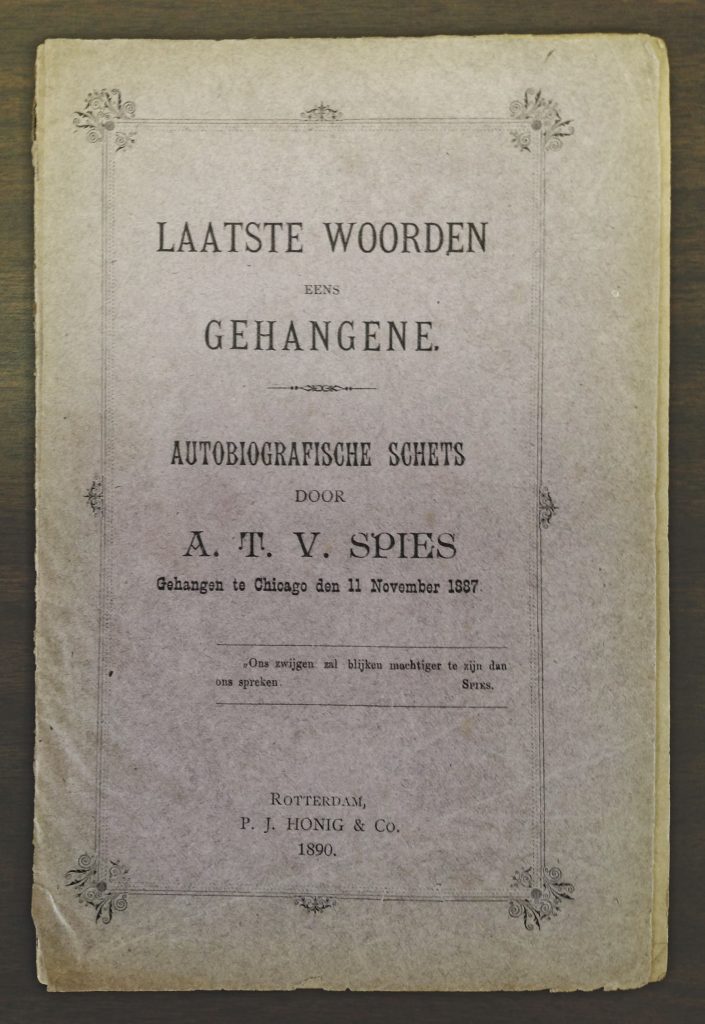 The “Chicago Eight,” the trial, and its aftermath became international news. August Spies, a German immigrant and one of the organizers of the rally, became well-known as he was subsequently indicted, charged, and sentenced to death. This copy of his autobiography, printed in Dutch and published in Rotterdam, is one example of the reach and the impact the Haymarket Affair had not only in the United States, but around the world as well. 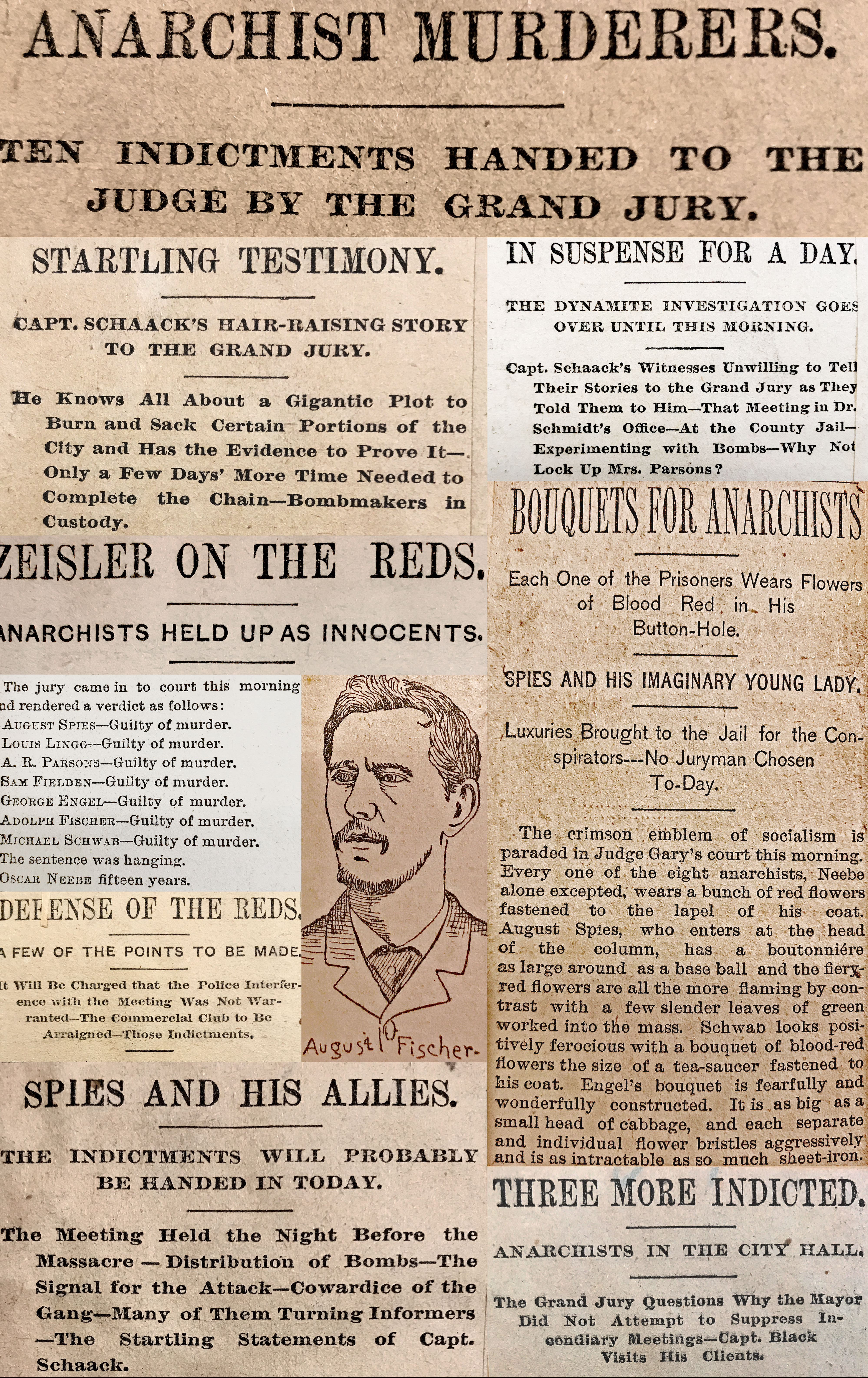 The Haymarket Affair and the ensuing two-month-long trial was followed by newspapers both in Chicago and across the country. Portrayal of both the police and the eight men who were charged varied greatly. The men on trial were held up as martyrs by laborers and activists, while at the same time many in the press painted them as blood-thirsty murderers. Newspaper articles covering the trial, such as the ones in this collage, document not only the details of the case, but also the different opinions and reactions to the Affair and its aftermath.

The Fates of the “Chicago Eight” 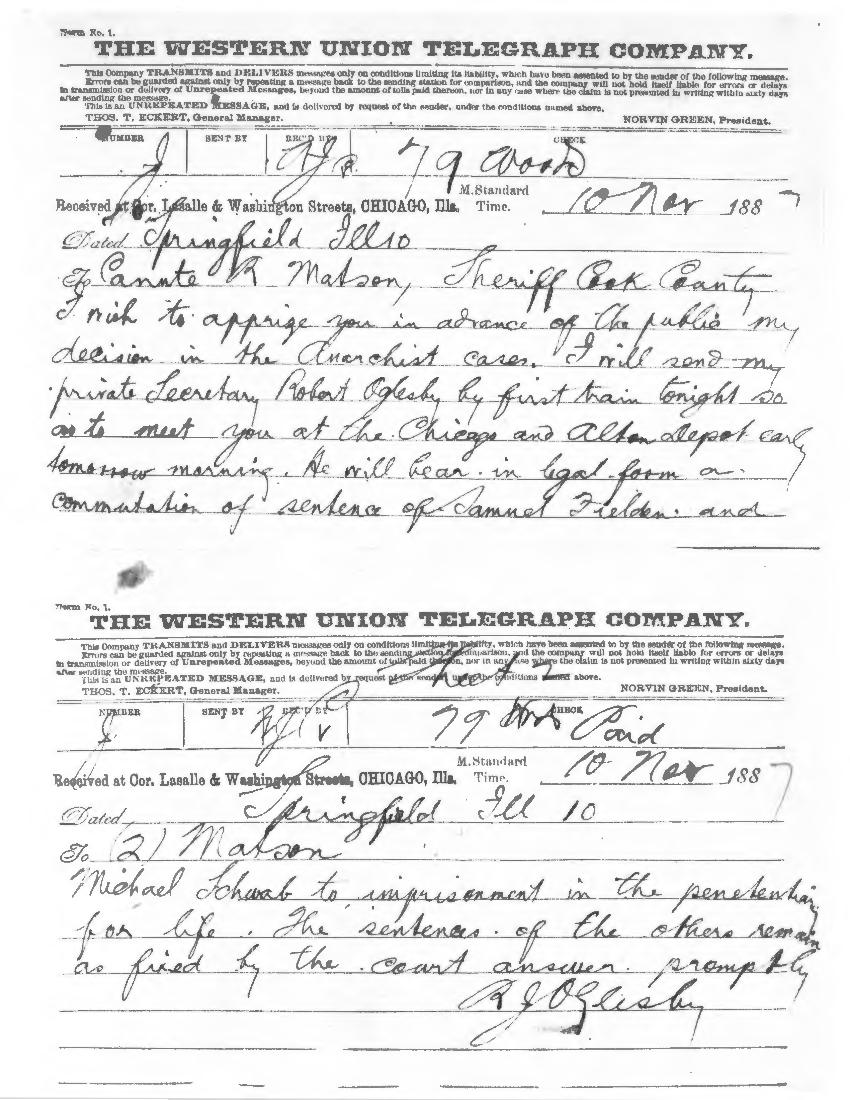 On November 10, 1887, the day before the execution of seven of the “Chicago Eight,” Governor Oglesby sent a telegraph to Cook County Sheriff Canute R. Matson informing him of his decision to commute the sentences of Samuel Fielden and Michael Schwab. He changed their sentences from death by hanging to life imprisonment. In the telegraph, Oglesby also confirmed that the court’s sentences for the other convicted men would remain the same. That same day, Louis Lingg, who was one of the remaining five men to be executed, committed suicide in his prison cell.

The next day, on November 11, Adolph Fischer, George Engel, Albert Parsons, and August Spies were hanged. The remaining three men were later pardoned by Governor John P. Altgeld in 1893, a decision which received mixed feelings from the public. 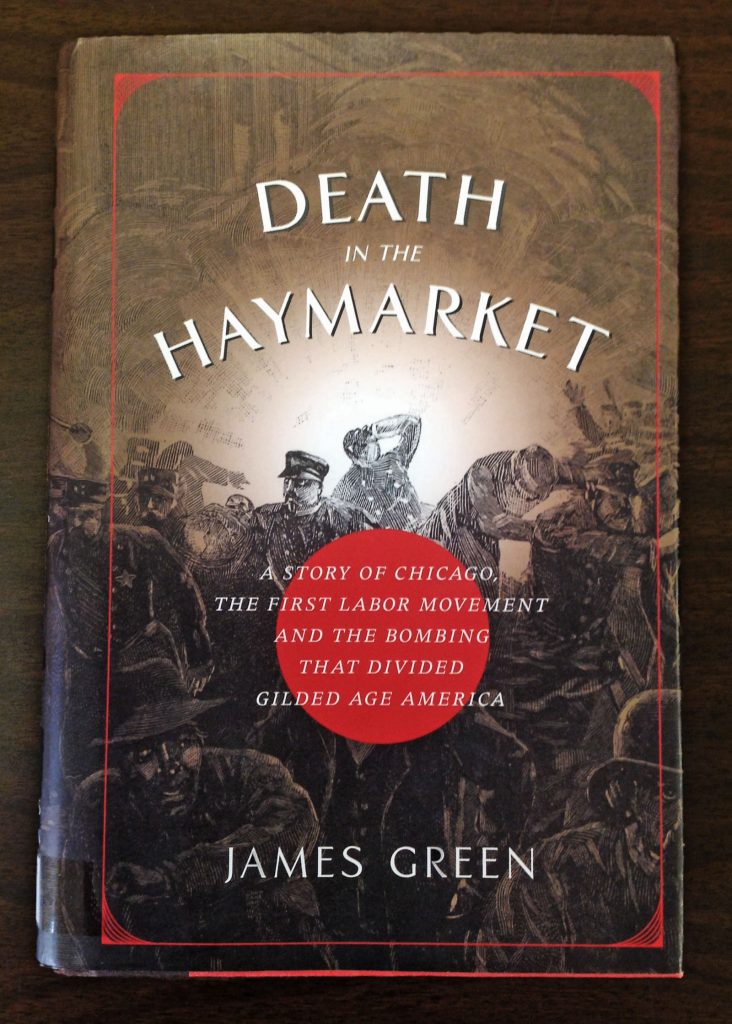 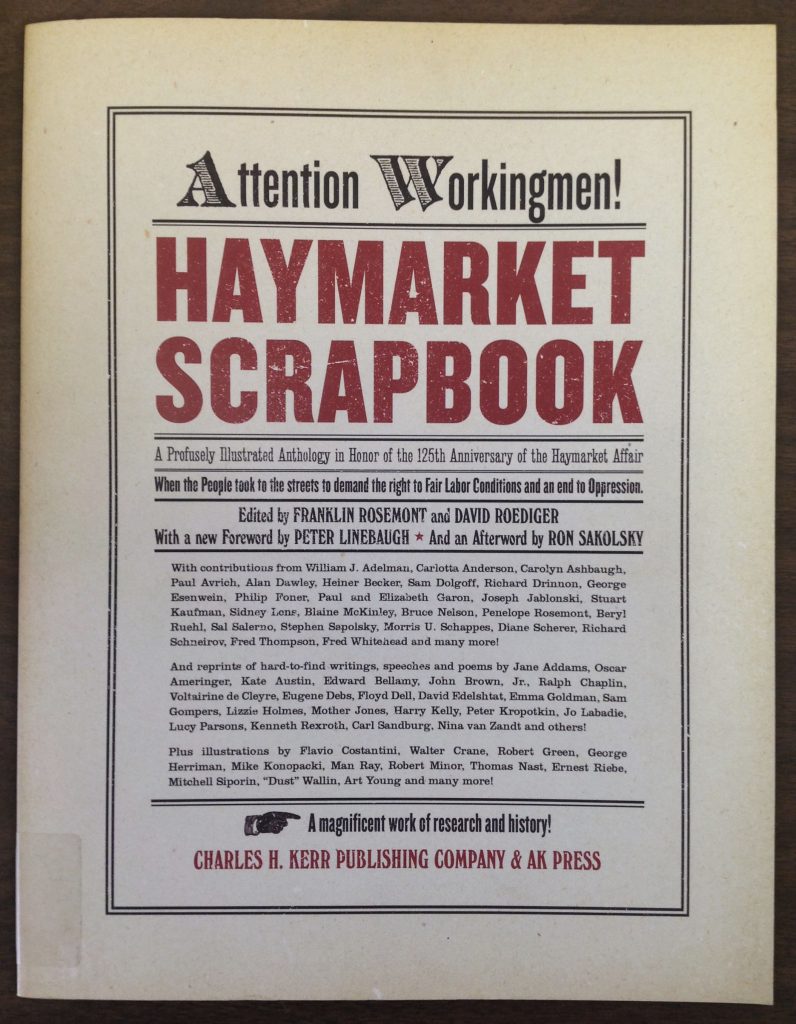 You can find both primary and secondary sources related to the Haymarket Affair here at the Illinois History and Lincoln Collections. In resources like the two listed above, secondary sources can provide a better understanding of the political climate at the time of the rally, the details of what happened the night of May 4, the arrests and subsequent trial, and the impact the Haymarket Affair had on the world.