“Global Food, Locally”  is a series designed to introduce you to the International and Area Studies Library’s new graduate assistants as well local dining options for food from around the world. In our third installment, Ashley Sheriff reviews the sushi at Kamakura and Yellowfin Japanese Restaurants.

I have lived in Champaign, Illinois for approximately seven consecutive years, having finished my undergraduate program in 2010 and having stayed to pursue a graduate career in both Library and Information Science and African Studies at the University of Illinois. Despite this long residency near campus-town, I’ve only recently discovered both Kamakura on 715 South Neil Street, and Yellowfin on 305 Cedar Street, discreetly hidden behind the County Market. Both restaurants are located west of the University of Illinois’ campus and cater to sushi aficionados, as well as those who are just looking to try something new. Popular items on their menus include  maguro (tuna), himeji (yellowtail), and more adventurous options such as uni (sea urchin) – all precisely cut,  prepared in ways that enhance their natural flavors [i], and presented to diners in aesthetically pleasing arrangements. In addition to ordering at their tables, customers can belly up to the sushi bars, also called the sushi-ya, at both restaurants where they can order sushi à-la-carte and watch the chef prepare each piece.

Out of the many choices for Japanese cuisine in the Champaign-Urbana area, I really enjoyed these sushi hot-spots because they have remarkable selections of cooked and raw sushi combinations in addition to much simpler classics such as maki rolls wrapped in crisp, thin sheets of nori (seaweed); nigiri, or sushi rice topped with fresh fish; and thick, consistently cut slices of salmon, snapper, squid, and tuna sashimi – which are specially cut pieces of raw fish without short-grain white rice or seaweed accompaniments. These traditional treats would not be available to us in the United States without the aid of cultural globalization that increases the flow of ideas, including food creations, between counties.

For example, the sushi boom in California during the 1960s wetted North American appetites for popular Japanese dishes and encouraged experimentation with fusion creations that combined the tastes from multiple cultures – such as the infamous California Roll that incorporates avocado and spicy mayonnaise with crab in a traditional maki roll. Japanese restaurants began to burgeon around the United States and sushi even became a “sign of class and educational standing” [ii] in the 1970s and 1980s.

I’m not sure if my enthusiasm for sushi implies sophisticated taste buds, but my favorite meal at both Yellowfin and Kamakura is Nabe udon soup (very thick wheat flour noodles and tempura vegetables in a mild, beef-flavored broth) and Chirashi, assorted fish such as salmon, tuna, and squid arranged atop vinegar flavored rice. These are milder dishes that work well for first-time customers, but diners can always spice up their sushi by dipping pieces into a mixture of wasabi paste (grated Japanese horseradish) and soy sauce – which are both provided at meals. I’ve ended my dinners at Yellowfin and Kamakura with a sweet confection. The sushi chef at Yellowfin usually gives diners free small desserts such as banana tempura after their meals. 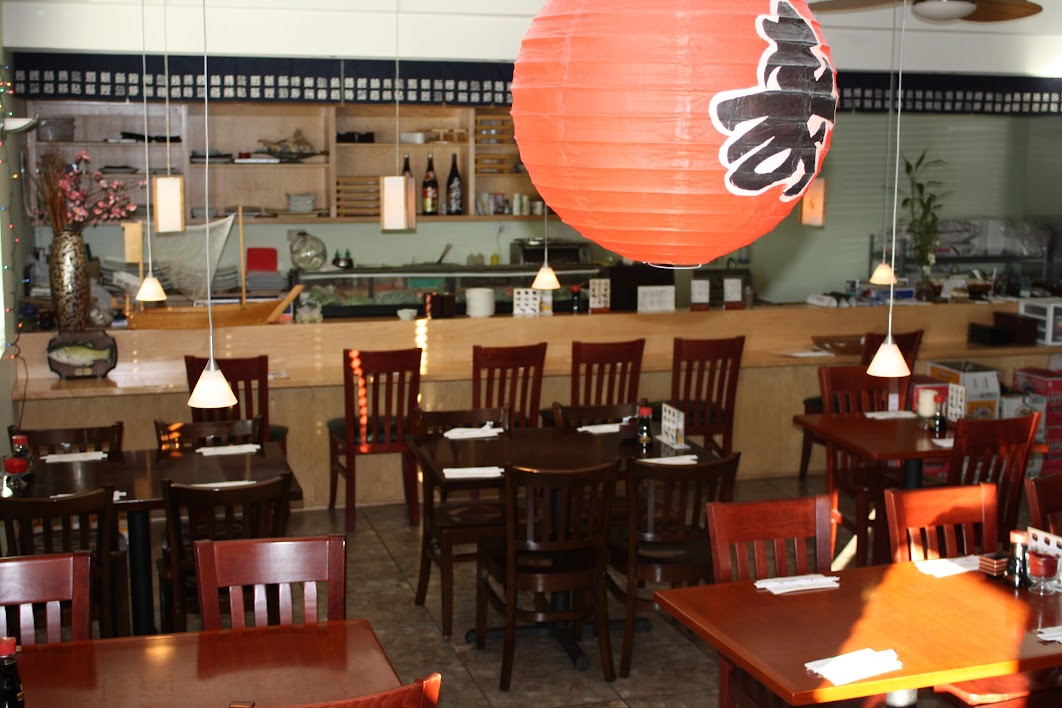 The interior of Yellowfin. This picture is from the restaurant’s website.

If you are interested in Japanese cuisine, be sure to try out some of the restaurants in Champaign-Urbana such as: Kamakura, Kofusion, Oishi, Sakanaya, and Yellowfin, as well as exploring articles and books on Japanese culture and food recipes in the UIUC Library catalog.

[i] Ashkenazi, Michael, and Jeanne Jacob.The essence of Japanese cuisine: an essay on food and culture. Philadelphia: University of Pennsylvania Press, 2001.