A 2.5 day series of workshops was held just after the International Congress of Entomology in Brisbane (August 2004) to track issues across three collaborative research projects in Diptera. Aims of the workshops were as follows:

These notes from the workshops were prepared by Gail Kampmeier, Chris Lambkin, Brian Wiegmann and David Yeates, with input from the other attendees. Most of these notes refer to discussions about the FLYTREE project (item 2 above).

There was a broad ranging discussion on bioinformatics needs for FLYTREE.

The FLYTREE grant will develop species pages for all 42 species in the first tier. Gail Kampmeier demonstrated a fully populated species page mock-up from the Therevidae. The species page should include information on: 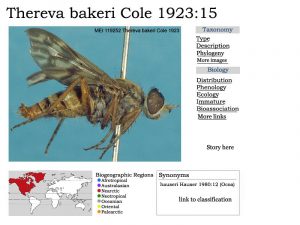 Characters and Character States – a Morphobank for Diptera

The FLYTREE grant gives us the opportunity to develop a morphological character matrix for the entire order. The first step in this process is to develop a character list.

There is a problem with homology interpretations in the Schizophora. RM suggested that the Schizophora may require the development of 2 sets of characters for male genitalia, depending on homology statements. The two sets could be tested for congruence with the remaining data (a la Wiegmann et al. 1993)

Rudolf Meier introduced the idea of a SEM atlas photos of characters:

SEM of first and last instar, terminal segment [may be expanded for lower Diptera]

34. Proboscis dissected off, boiled in KOH, photographed in alcohol/glycerine

SUMMARY OF MAJOR ACTIONS AND OUTCOMES FROM MEETING