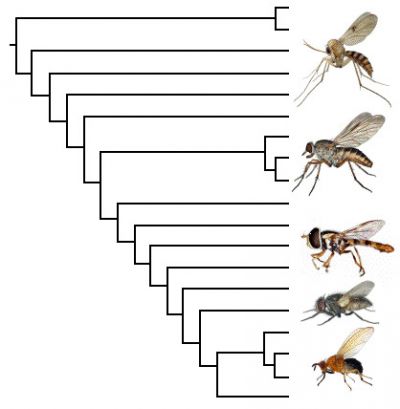 With over 158,000 described species, flies (the insect order Diptera), are among the most diverse groups of living organisms on the planet.

This diversity transcends simple species numbers and is demonstrated in the great breadth of morphological, ecological, and behavioral variation found in the group.

Flies have a deep evolutionary history that extends back to the Permian Period, over 250 million years ago.

The FLYTREE project is an international research collaboration funded by the US National Science Foundation, to elaborate and discover the details of fly relationships and diversity with the ultimate goal of providing a newly resolved phylogeny for this major branch of the Tree of Life.

With over 158,000 described species, the insect order Diptera or true flies, is one of the most diverse branches on the Tree of Life.  The evolutionary relationships between the main branches of the fly tree are still largely unknown or controversial.  Understanding the history of flies is critically important in biology and medicine because flies are model organisms for comparative research in genomics, development, neurobiology, and behavior (e.g., fruit flies, mosquitoes, house flies, medfly).  Comparative research on flies depends on having a reliable estimate of their phylogenetic tree. We will reconstruct the fly tree in detail from an unprecedented large sample of comparative genetic and anatomical data.  We will also integrate information from the exceptional fossil record of Diptera, from emerging genomic and developmental databases, from new and existing specimen data, and from previously published phylogenetic trees.

The project involves a collaborative effort among a large, international team with extensive research expertise in fly biodiversity, genetics and behaviour. The research team will also develop web-based bioinformatics tools for natural history information about flies, their biology, and impact on other fields of research.  The task will be mastered in a three-tier approach. In the first tier, we reconstruct a backbone tree based on the first comprehensive morphological character matrix and large genomic data set for 42 species representing all major dipteran lineages and incorporating important model organisms. The second-tier analysis will use a more comprehensive species sample comprising at least one species for all fly families, more morphological characters, and a reduced amount of molecular data.  In this tier we will also incorporate characters from well-preserved fossil species. The third tier will rely on the backbone trees reconstructed in the first two tiers for building a meta-analysis-based supertree for 1500-2000 species. Using these data within each tier of the project, we explore multiple comparative analytical approaches and sampling strategies for reconstructing the phylogenies of megadiverse taxa.

A more exactly specified Tree of Life for Diptera provides a major organizing framework the astounding diversity of flies and guides research in other areas of biodiversity. Molecular and morphological character systems and genes explored in this project should be extremely useful in resolving similar questions in other insect groups. Ultimately a comprehensive new phylogeny for all of Diptera will provide a valuable framework for testing evolutionary hypotheses critical in comparative studies of dipteran development, behavior, genomics, and neurobiology.