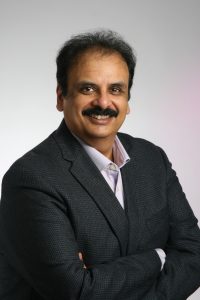 Edge computing is a natural evolution of cloud computing, where compute resources, ranging from a credit-card size computer to micro data centers, are placed closer to data (information) generation sources. Application and system developers use these resources to enable a new class of latency- and bandwidth-sensitive applications that are not realizable with current mega-scale cloud computing architectures. Edge computing is in the center of the Internet-of-things revolution. Industries, ranging from manufacturing to healthcare, retail to space-exploration are infusing edge-based information technologies into their day-to-day processes and tasks. They are developing real-time control systems that use sensors and actuators along with machine learning and artificial intelligence to create new functions, improve efficiency and reduce cost.

In this talk, I will explore this exciting new computing paradigm. I will discuss the history and evolution of the intelligent edge and one of its “killer” applications. Specifically, I will describe our edge-based, hybrid cloud live video analytics system called Rocket along with a case study of a smart-city traffic management system that we have deployed. With Rocket, we are moving forward aggressively towards the democratization of edge-based video analytics. Time permitting, I will also discuss how we are addressing some of the challenges facing the large-scale adoption of edge computing and future business impact.

Dr. Bahl has published over 125 papers with over 45,000 citations. He has been granted 150+ patents and delivered over 45 keynotes and plenaries.  For his seminal work in wireless systems and broadband access he has received two lifetime achievement awards including the IEEE Koji Kobayashi Computers and Communications Award, the ACM SIGMOBILE Outstanding Contributions Award. He has also been honored with two United States FCC awards, two national transportation awards, two test-of-time awards, three best paper awards, two distinguished alumni awards, a distinguished service award, and a IEEE outstanding leadership award. Under his direction, his group has had game-changing impact on world’s spectrum regulations and policies, and on Microsoft’s cloud computing infrastructures including its data center networks, wide-area networks, edge computing and live video analytics. Dr. Bahl is the founder of ACM SIGMOBILE, ACM MobiSys, ACM GetMobile and several other important conferences. With his wife, he co-founded Computing For All, a non-profit dedicated to increasing and enhancing computer science education for students of all ages and from all backgrounds. Dr. Bahl is a Fellow of the ACM, IEEE, and AAAS.