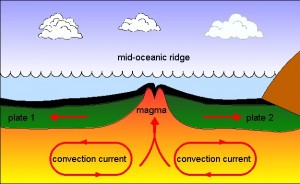 Portrayal of thermal convection as a mechanism.

The main issue with Wegener’s Continental Drift Theory was he did not have a mechanism behind the drifting of continents. He had a substantial amount of evidence that made sense; nonetheless, without a driving force behind it, the scientific community simply discredited his entire idea. It wasn’t until in 1929, shortly before Wegener’s death, that Arthur Holmes proposed the idea that the mantle undergoes thermal convection to finally give Wegener’s Continental Drift Theory a viable mechanism. However, just as Wegener’s idea was ignored, Holmes’ new mechanism received very little attention at the time as well. Thermal convection revolves around the idea that as a substance is heated, it loses density and therefore rises to the surface until it cools and eventually sinks again. Holmes thought that this process of heating and cooling could possibly have enough force to cause such massive conglomerates like the continents to shift.

Photograph of Harry Hess explaining his idea of seafloor spreading.

In 1960 Holmes’ thermal convection idea finally began to gain credit as scientists began to gain a better understanding of the ocean basins. As scientists began to discover mid-oceanic ridges, geomagnetic anomalies parallel to the mid-oceanic rides, and the combination of island arcs and trenches occurring together, research began to suggest that Holmes’ idea of convection may actually be fruitful. Following this new scientific buzz, Harry Hess, a United States Navy officer who served in World War II and geologist, introduced his own theory of seafloor spreading. His theory followed that magma from the mantle could ooze up at mid oceanic rides and cool, thereby expanding and pushing the plates on either side of the ridge away from it. Similar to Wegener’s theory that continents do in fact move, Hess’ seafloor spreading contradicted Wegener’s continental drift in that it involved the ocean sea floor moving as it expanded—instead of continents ploughing through the sea. Nonetheless, Wegener is unquestionably the father of the work done by Holmes and Hess because he was able to see the apparent evidence at hand, without a known mechanism and still accurately predict the outrageous claim that massive continents did in fact move over time.