Born on November 1st, 1880 in Berlin, Germany, Alfred Wegener was the youngest of five children. His father, Richard Wegener, was a theologian who taught classical languages at Berlinisches Gymnasium zum Grauen Kloster—a prestigious school German school. Wegener first attended school at Köllnische Gymnasium in Berlin where he began to take interest in physical and Earth science and proceeded to graduate at the top of his class. After graduating he attended the University of Berlin as well as a university in Innsbruck, Austria. At the University of Berlin, in addition to studying physical and Earth science, he worked toward earning a Ph.D in astronomy. While working on his doctorate, he began to gain interest in physics, meteorology and paleoclimatology. Upon graduating the University of Berlin in 1905 with a Ph.D in astronomy, he decided to work at the Aeronautischen Observatorium Lindenberg with his older brother, Kurt, who shared similar interests in meteorology and polar climatology. 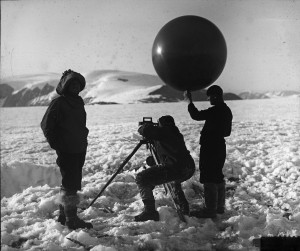 Wegener and his team preparing for a weather balloon launch.

Together the two brothers went on to use weather balloons as well as hot air balloons to pioneer meteorological research. The weather balloons sent into the upper atmosphere by them would execute metrological surveys and test a specific celestial navigation method using a special quadrant. On one of the hot air balloon trips, Alfred and Kurt managed to break the world record in 1906 for an uninterrupted flight—they remained afloat for around 52 hours. During his eventual four multiple Greenland expeditions, Alfred Wegener would use the weather balloons extensively to track various air masses and temperatures.

From 1906 to 1908, Wegener decided to take the first of four Greenland Expeditions in order to study polar weather. Led by Ludvig Mylius-Erichsen, the expedition crew’s mission was to explore the last unknown portion of the northeastern coast of Greenland. Alfred Wegener was thrilled by this opportunity as he always dreamed of adventuring into an Artic climate because of the scientific and physical challenges. While on the expedition, Wegener constructed the first meteorological station in Greenland. Moreover, he became the first scientist to use kites and tethered weather balloons to study the polar atmosphere.

Arriving home from his first expedition, he landed a teaching position at the University of Marburg in Germany thanks to his Artic research. There he lectured on various subjects including meteorology, applied astronomy, cosmic physics, and “astronomic-geographic position-fitting for explorers.” Students and colleagues of Wegener admired him for his clarity and ability to explain complex topics in simple terms without sacrificing detail. Hans Benndorf, a physics professor at Marburg, further applauded Wegener’s enthusiasm and clarity as he wrote,” With what ease he found his way through the most complicated work of the theoreticians, with what feeling for the important point! He would often, after a long pause for reflection, say ‘I believe such and such’ and most times he was right, as we would establish several days later after rigorous analysis.” In 1910 while still teaching at the University of Marburg, Wegener began to take interest in the history of the Earth’s continents and their placement, after he noticed the jigsaw puzzle like features of their respective continental shelves. More specifically he noticed how the eastern coast of South America and the northwestern coast of Africa seemed like a perfect fit, thereby coming to the conclusion that they must have been connected at one point. However, Alfred Wegener did not act upon this conclusion until coming across several scientific documents. Those documents he found, while browsing the University of Marburg’s library, listed information on fossils of identical plants and animals found on opposite sides of the Atlantic. Previously, explanations for identical fossils being found on separate continents were based upon the existence of a type of land bridge that has now been sunken. Nonetheless, Wegener knew his idea of the two land masses being connected was a much more viable explanation. In 1912, Wegener decided to present his idea of continental displacement, later known as continental drift, in a lecture at the Senckenberg-Museum and three articles in the Petermanns Geographischen Mitteilungen journal.

From 1912 to 1913 he began his second Greenland expedition. With the idea of continental drift fresh in his mind, Wegener was enthusiastic for another trip into the polar climate. The expedition’s purpose was reach the crossing of the inland ice of Greenland from east to west—an aim they had failed to reach in the first Greenland expedition. Unfortunately, the trip turned into a nightmare, to Wegener’s despair, as the expedition team ran out of food and became lost within the harsh glacial terrain. Luckily, the team was saved by a clergyman venturing back to a remote congregation. 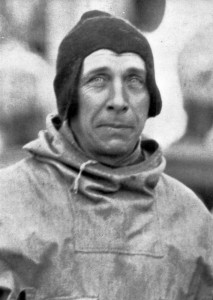 Photograph taken of Alfred Wegener while on one of his Greenland expeditions.

Upon returning from the hazardous second Greenland expedition, Wegener married Else Köppen, the daughter of fellow meteorologist Wladimir Köppen, and resumed his teaching career at the University of Marburg. With World War I raging in 1914, Wegener was drafted into the German army, where he was injured twice and eventually declared unfit for combat. He was reassigned to Germany’s weather forecasting service for the duration of his service. In 1915, Wegener was able to publish the first version of his most prized work, Die Entstehung der Kontinente und Ozeane (The Origin of Continents and Oceans) as an extension to his previous lectures and publications from 1912. In this work, Wegener provided a considerable amount of evidence surrounding his idea of a “supercontinent.” Wegener believed his extensive research would sway the scientific community; however, his publication was mostly ignored and even generated hostile remarks. Three reasons the scientific community responded with such disdain to his theory were overall disbelief, anti-German bias caused by wartime friction, and most importantly the lack of a viable driving mechanism. Geologists and scientists alike couldn’t fathom the fact that such large land masses like continents could move, let alone “plow” through the firm oceanic crust. Additionally, Alfred Wegener being from German decent received less and even negative attention from the scientific community as a result of the tribulations and hostility caused by World War I. Most significantly, the adverse respond to his theory was provoked by his absence of a feasible driving force. Wegener provisionally suggested that centrifugal force caused by the rotation of the earth and even tidal waves could be possible mechanisms; however, it was well known even to Wegener that these forces were too weak and therefore inadequate. As a result, critics bombarded Wegener for suggesting a theory with no source to fuel it.

After his initial publication of The Origin of Continents and Oceans, Wegener left his position at the University of Marburg and moved to Hamburg where he became a meteorologist at the German Naval Observatory. In 1921, the University of Hamburg appointed him to senior lecturer. As a senior lecturer Wegener continued to improve his work on Continental Drift and was able to produce the third version of The Origin of Continents and Oceans in 1922. Sadly, the revised edition still had no influential mechanism and met much criticism both nationally and internationally. From 1924 to 1930 Wegener enjoyed a suitable position as professor of meteorology and geophysics at the University of Graz in Austria. During that period he coined the Greek word, Pangea, meaning “all lands” to depict his idea of the supercontinent that once held all the continents together. Additionally, Wegener ventured back to Greenland for a third time in 1929 and one last costly time in 1930.

Propeller-driven snowmobile used by Wegener and his team.

The third Greenland expedition was fueled by Wegener, who was restless from the unanswered questions of the failed first and second expeditions. This mini expedition under Wegener’s management mapped out a scheduled plan for a larger expedition later on and tested the efficiency of propeller-driven snowmobiles.

Wistfully, Alfred Wegener’s continuation into his fourth Greenland expedition proved to be fatal. On an ambitious move, Wegener planned to use a new seismic method to measure the thickness of Greenland’s icecap and establish a permanent station on the icecap in order to relay meteorological measurements years round. The expedition featured dangerously cold temperatures, leading to extreme food shortages and frostbite. Due to the food shortages, perilous trips between base camps needed to be made. On one of those trips Alfred Wegener never made it and passed away in November of 1930 possibly due to heart failure caused by over exhaustion. His body was later found the following summer and reburied at the site of his death