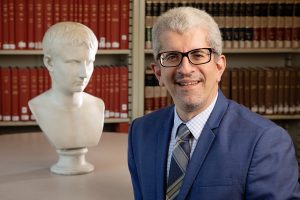 Welcome to my personal webpage. I am Professor of Classics and Interim Director of the School of Literatures, Cultures & Linguistics at the University of Illinois at Urbana-Champaign (Fall 2022; Associate Director 2021-22), University Scholar (2019-2022), I am the former editor of The Classical Journal (2016-2021) and of Illinois Classical Studies(2011-2016). I served as President of the Classical Association of the Middle West and South for 2015-2016. I earned my BA in Greek Philology from the University of Crete at Rethymno, Greece, and my PhD in Classics from Brown University. Before my arrival in central Illinois, I was an Assistant and Associate Professor of Classics at Baylor University. During the autumn of 2008, I was a Visiting Fellow at Corpus Christi College, at the University of Oxford, UK, for the Michaelmas Term. I returned to Oxford for the Michaelmas Term of 2014 and the Hilary Term of 2018. In January 2016, I received the Teaching Excellence Award from the Society for Classical Studies. In April 2017, I received an Ovatio from the Classical Association of the Middle West and South (audio available here). In August 2019, I was named University Scholar at the University of Illinois. In September 2021, I received the Campus Executive Officer Distinguished Leadership Award.

I have recently edited thirteen volumes: Silius Italicus and the Tradition of the Roman Historical Epos (with Marco Fucecchi, Brill, August 2022), Screening Love and War in Troy:Fall of a City (with Monica Cyrino, Bloomsbury, January 2022), Undamning Domitian? Reassessing the Last Flavian princeps (with Claire Stocks and Emma Buckley, ICS 44.2, 2019), Fides in Latin Literature (with Claire Stocks and Emma Buckley, Toronto, 2019), Campania in the Flavian Poetic Imagination (co-edited with R. J. Littlewood, Oxford, 2019), Epic Heroes on Screen (co-edited with Stacie Raucci, Edinburgh, 2018), Libri Carolini (co-edited with Barbara Wallach, ICS 42.2, 2017), Oxford Readings in Flavian Epic (Oxford, 2016), STARZ Spartacus: Reimagining an Icon on Screen (co-edited with Monica Cyrino, Edinburgh 2016; issued in paperback in 2018), Flavian Poetry and its Greek Past (Brill, 2014), Ritual and Religion in Flavian Epic (Oxford University Press, 2013), the Blackwell Companion to Terence (with Ariana Traill, 2013), and the Brill Companion to Silius Italicus (Brill, 2009), Statius’s Silvae and the Poetics of Intimacy (with Carole Newlands, Arethusa 40.2, 2007); my Bryn Mawr commentary on Plautus’ play the Mercator came out in 2009.

I am currently involved in several major projects: a monograph on Death and Ritual in Flavian Epic, a commentary on the Pseudo-Virgilian Ciris, a three-volume edition of Cornelius Schonaeus’ (Terentius Christianus) comedies (with Konstantinos Arampapaslis), a volume on Statius’ Silvae (with Carole Newlands for Oxford), and a volume on Marginality in Neronian and Flavian literature (with Konstantinos Arampapaslis, Stephen Froedge, and Clayton Schroer). I am co-editor of two Oxford Commentary series, the Oxford Commentaries in Flavian Poetry and the Oxford Pseudepigrapha Latina. Future ongoing projects include commentaries on Tacitus’ Histories 4 and Pseudo-Seneca’s Hercules Oetaeus.

Department of the Classics