My research focuses on understanding the kinetics of geochemical systems, and using these insights to describe the dates and rates of erosion and uplift in orogenic belts, plateaux, and cratons. My primary tool in this endeavor is (U-Th)/He low-temperature thermochronometry, a collection of chronometers in which the daughter product, helium, is only retained (i.e. the clock starts ticking) below certain temperatures (from ~200 to ~40 °C depending on the mineral). This research field has greatly enhanced the study of uplift and erosion in Earth systems, and has been integral in showing the links between surface and tectonic processes. The continued use of (U-Th)/He dating as a reliable thermochronometer relies on improving the accuracy of its predictions for a sample’s thermal history. Specifically, unresolved challenges include data interpretation and the proper characterization of diffusion kinetics. By combining laboratory experiments with field methods and modeling, I seek to address these issues, expand the method’s utility, and better demonstrate how the combined effects of temperature and time operate in earth systems from the crystal to the mountain belt scale. Please read below the pretty picture of two zircon grains for more specific information about different ongoing and past projects! 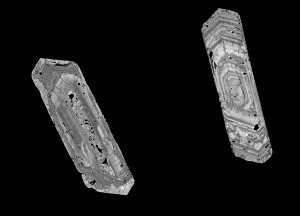 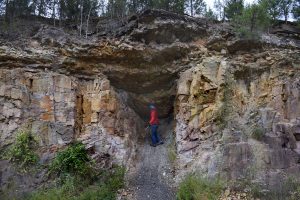 Thermochronologic techniques have been used to great success over the last few decades to constrain the dates and rates of rock uplift and erosion (i.e. exhumation) in active orogenic belts, and in turn, illuminate the geodynamic and atmospheric mechanisms that shape topography. More recently, thermochronologic research has expanded to include exhumation histories of plateaux  and cratons, which has provided insight into possible connections between sub-lithospheric mantle dynamics and upper-crustal responses . In the case of cratons, a particularly promising and emerging focus of research is in deep-time (i.e. Precambrian) thermal histories. Whereas thermochronology as applied to active orogens often examines the most recent episode of exhumation, deep-time thermochronology can be used to constrain the multiple phases of heating and cooling that have occurred over time spans of 100-1000 Ma. These histories reveal the billion-year record of tectonic processes tied to continent formation and disassembly , and through the ability to constrain the timing and magnitude of erosion at key points in Earth’s history (e.g. the Neoproterozoic-Cambrian “Great Unconformity”), provide insight into links among the solid earth, atmosphere, and biosphere. My group is conducting ongoing research on this topic in both the western U.S. and in the midcontinent.

Exhumation in the Sevier/Laramide Orogenies of the Western US 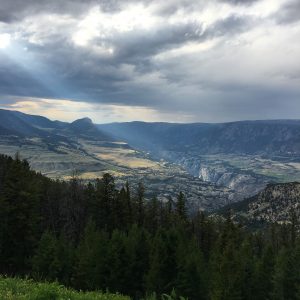 My co-authors and I have worked on various aspects of the Sevier/Laramide orogenies in the Charleston-Nebo Salient (CNS) of central Utah (centered near Provo), and projects with Devon Orme (Montana State University) using zircon (U-Th)/He dates to constrain the exhumation of Laramide ranges in Wyoming. Dave Pearson (Idaho State) and I have worked on projects to describe the long-term exhumation in the central and eastern Idaho fold-and-thrust belt and how it might relate to timing of earliest deformation in this portion of the Sevier belt, and the interaction between thin-skinned and thick-skinned structures. 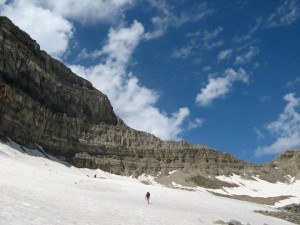 A prominent unresolved problem in low-temperature thermochronology relates to the (U-Th)/He zircon (zircon He) thermochronometer. Given its ubiquity and longevity in crustal rocks, zircon is a versatile and frequently used mineral in both detrital and bedrock thermochronology studies. Zircons with the same thermal history sometimes display significant irreproducibility in their He dates. In certain cases, zircon He dates are either positively or negatively correlated with a proxy for the degree of radiation damage in each zircon, effective uranium (eU, a single value for parent concentration that combines the weighted daughter contributions of U and Th). Much of my research has been focused on using computational models, laboratory techniques, and a mechanistic understanding of atomic-scale processes like tortuosity and percolation to explain these correlations. I have combined these methods to create a model that explains He diffusivity in zircon in the context of radiation damage (Guenthner et al., 2013,). Specifically, the model accounts for damage accumulation, damage annealing, and He diffusion and, given each grain’s eU concentration and a common time-temperature (t-T) path, can be used in a forward and inverse sense to constrain thermal histories. I continue to work with my students to improve our understanding of the systematics of He diffusion in zircon. Much of our group’s recent focus has been on applying this deep-time zircon (U-Th)/He approach into examination of exhumation in the Neoproterozoic (see above).

Exhumation in the Antarctic Peninsula in Response to a Slab Window 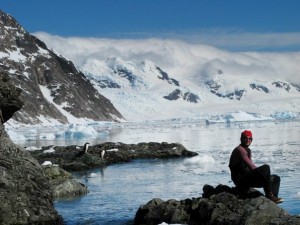 As part of my tenure with the illustrious Team Barbeau, I collected a series of samples from the Antarctic Peninsula for apatite and zircon (U-Th)/He and fission track analysis (Guenthner et al., 2010). This study provided detailed evidence for major pulses of exhumation that coincided with the progressive opening of a slab window. Through the use of inverse modeling, I was able to quantify the degree to which a developing slab window influences the upper plate’s geothermal gradient and dynamic uplift history.