A Roundtable Discussion of Racism, Antisemitism….
On Campus and Beyond

The Program in Jewish Culture & Society organized this event on the heels of recent racist and antisemitic acts on campus. What proactive steps can we take to foster an environment locally and nationally that discourages such acts and encourages diversity?
Each discussant will speak for 5 minutes so there will be ample time for open conversation Professor Virginia Dominguez, Anthropology, co-moderator.

Attached is the flyer for this semester’s In Focus Group, the Counseling Center’s ADHD Coaching Group. Please feel free to distribute and refer students who may benefit. Students do not need an ADHD diagnosis and are asked to contact me to register. Space is limited to 10 students.

IN FOCUS is a six-week group that offers education and peer support for students who experience difficulties commonly associated with ATTENTION-DEFICIT/HYPERACTIVITY DISORDER (ADHD). Group meetings will be interactive and help students develop valuable skills for succeeding in school, career, and daily life.

Program in Jewish Culture & Society
Monday, January 25 @ 7:30pm
Free screening of the film
A BORROWED IDENTITY
with Sayed Kashua
There will be a Q & A session with Sayed Kashua after the
screening
Location: Art Theater
126 W. Church Street
Downtown Champaign

GWS is inspired by recent student activism challenging anti-black racism and institutional racism against people of color.
In support of students working for racial justice on our campus,
GWS will be open during the evenings this week for any students interested in sharing ideas for activism – or who just want to study in a supportive, anti-racist space.

All students are welcome. Snacks will be provided!

Please join us at 5PM on Wednesday, December 2 in the Program for Jewish Culture and Society (109 English) for the final film of our fall series, Yidl With His Fiddle (Poland, 1936, 92 minutes). Pizza will be served, bring your own beverage.

From the National Center for Jewish Film:

Director Joseph Green returned to his native Poland from America to produce this film, the most commercially successful musical in the history of the Yiddish cinema, starring Molly Picon, consummate comedienne of Yiddish theater, vaudeville, and film. This is the classic folk comedy about a man and his daughter who, penniless, decide to become travelling musicians. The daughter disguises herself as a boy to relieve her father’s anxiety about unforseeable problems that could befall a young woman “out in the world.” They then join together with “another” father-son duo for music, comedy and romance.

Green’s original screenplay was enhanced by the folksy lyrics of Yiddish poet Itzik Manger and the memorable musical score of Abraham Ellstein, as well as the talents of Leon Leibold, the romantic lead who later starred in The Dybbuk and Tevye, and Max Bozyk, a character actor par excellence.

Breaking away from the studio-bound cinematography of the early Yiddish talkies, Yiddle with His Fiddle was shot on location in the picturesque town of Kazimierz and nearby Warsaw. With shtetl inhabitants as extras, the film captures the vitality and invincible spirit of traditional small town Jewish life.

The Central Black Student Union at Illinois invites YOU (faculty, advisors, counselors, etc.) to join them at their 2015 Conference: “Our Place at a Predominantly White Institution”. In addition to full-day workshops and speakers, the conference will include a session on how YOU can support the university’s black students.

“The Role of Professionals and Allies”

Facilitated by Cory Major, Associate Director of the Office of Minority Student Affairs, and Manuel Colón, Undergraduate Recruiter for the Department of Natural Resources and Environmental Sciences. 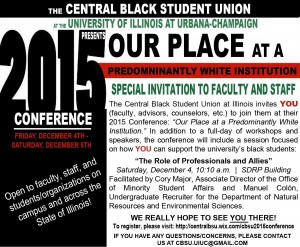 WE REALLY HOPE TO SEE YOU THERE!

If you have any questions/concerns, please contact us at cbsu.uiuc@gmail.com

Department of Statistics, University of Illinois at Urbana-Champaign